１． Perception about Prospects of Military Conflict

1-1 Will a Military Clash Occur in East Asia?

Executive Summary: Many commentators and specialists from Japan and China are concerned about a military clash between the two nations amid the territorial dispute over the Senkaku Islands ((known as the Diaoyu in China). The respondents in all three countries agree that the area facing the greatest risk is the East China Sea. Will a military clash occur?

Will a military clash occur?

Also in China, 43% agree that a military clash will occur, making a majority group among the Chinese respondents and thus indicating their strong sense of crisis.

Meanwhile, only 29% of the South Korean respondents predict a military clash and 46.4% denied the likelihood. The responses of the Koreans in the survey indicate that they have a much weaker sense of crisis.

【FIGURE 1: Do you think that a military conflict will happen in East Asia?】

Where in East Asia will a military clash occur?

Although the largest groups of respondents in the three countries answer in the affirmative to the question, they represent no more than half the respondents in each country. This indicates they altogether do not have too much hope for formal diplomacy. 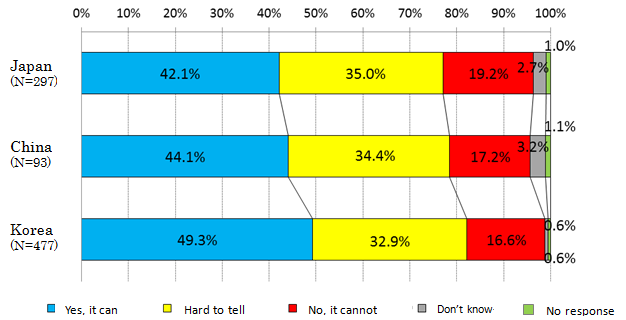 【FIGURE 4: Do you think that the intergovernmental diplomacy works effectively between Japan and China, Japan and the Republic of Korea?】 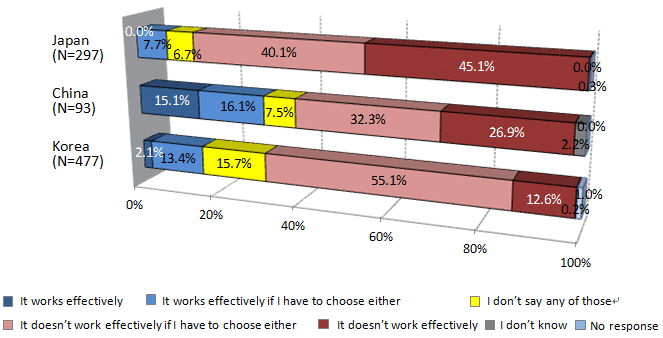 Why is formal diplomacy not functioning?

The question is asked to those respondents who reply formal diplomacy is not functioning. The most prominent reason given by the largest group of the Japanese respondents is "domestic political situations" of the respective countries. The largest groups of Chinese (32.9%) and South Korean (32.8%) respondents refer to "confrontation over territorial issues and historical perceptions" as reasons for formal diplomacy not functioning. Many other Chinese (26.3%) and South Korean (27.6%) respondents also refer to "public opinion based on overheated nationalism." Issues related to "past history" altogether account for more than a majority of Chinese and South Korean responses. "Remarks and actions of Japanese prime minister(s)" -- often a prominent target of criticism in South Korea and China -- ranks second in the list of reasons in the survey in China, yet it is nominated by less than 30% of the respondents in China.

【FIGURE 5: Those who chose "It doesn't work effectively (if I have to choose either)", What is the reason why you think so?】 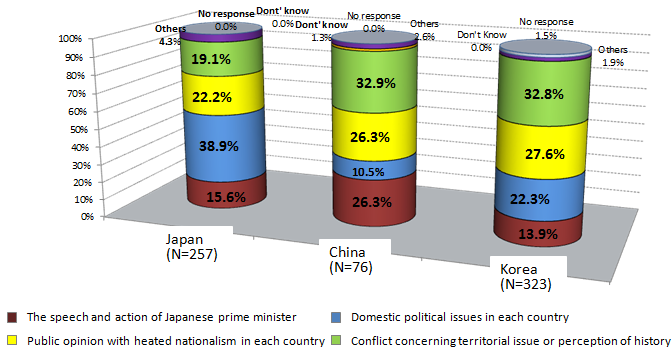 3-1 What is Expected of Civil Diplomacy?

Executive Summary： Expectations for "civil diplomacy" are growing in all three countries. The respondents count on "NPOs and NGOs" as leading "players of civil diplomacy."

【FIGURE 6: Do you expect the role of civil diplomacy while there are diplomatic gridlocks between Japan and China as well as Japan and South Korea】 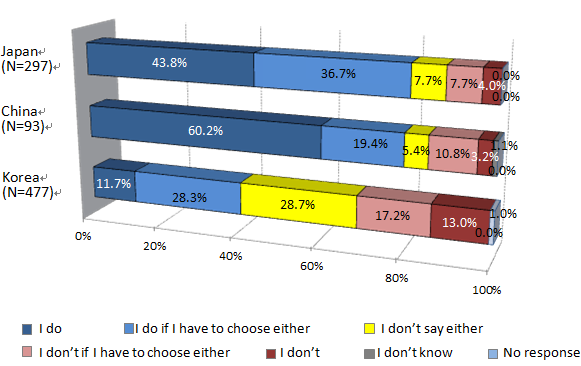 *This question was not included in the survey conducted in South Korea.

Majorities of respondents in each country -- 70.4% in Japan, 58.1% in China and 63.9% in South Korea -- agree that "non-profit organizations such as NPOs and NGOs" are leading actors of civil diplomacy. It is notable that as many as 47.5% of the Japanese respondents name "people perceiving themselves responsible for settling the issues" also as leading actors.

In the survey in China, 55.9% of respondents also name "media," ranking it second only after "NPOs and NGOs." In contrast, only 34.3% of the Japanese respondents refer to media. Meanwhile, as many as 62.3% of the Koreans surveyed also name "intellectuals/influential commentators" as leading actors while 50.1% expect "corporations" as well to play the role.

【FIGURE 8: If intergovernmental diplomacy is trapped in gridlocks, whom do you expect as a main actor for civil diplomacy? (multiple)】 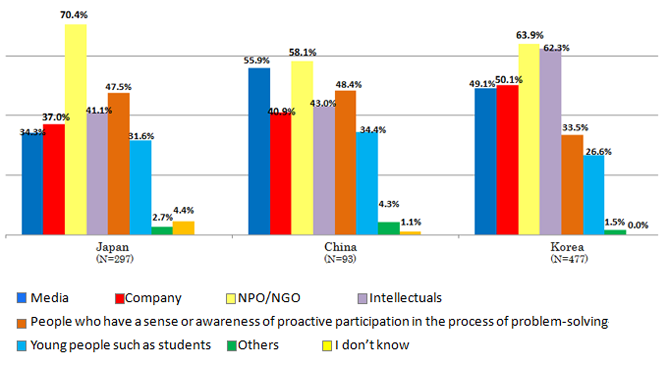 Governments often promote public relations activities directly to the people of other countries in what is known as "public diplomacy." In the survey, Japanese, Chinese and South Korean respondents all share high expectations for such public diplomacy; 56.9% of respondents in Japan, 77.4% in China and 51.8% in South Korea positively and passively express expectations for it. China, in particular, stands out with strong expectations, with nearly 80%, which seems to indicate their support for their government's policy of promoting it. In all three countries, those somewhat or strongly negative about it remain much smaller in number, with 26.2% in Japan, 9.7% in China and 27.4% in South Korea.

Executive Summary: More than 90% of respondents in each of the three countries all consider "multilateral dialogue among governments" necessary for the maintenance of peace and stability in East Asia.

With the territorial dispute in the East China Sea coming closer to a critical military issue, 96.3% of Japanese respondents positively or passively express the need for multilateral dialogue among governments. Meanwhile, only 0.3% of them denied the need. Also, 90.3% of the respondents in China and 93.0% in South Korea agree about the need; negative responses were made only by 7.5% in China and 2.1% in South Korea.

【FIGURE 9: Do you think that multilateral dialogues among governments are necessary for the security and peace in East Asia?】

【FIGURE 10: Which framework o you expect most in order to solve conflicts such as territorial issues in the East China Sea?】

The surveys were conducted in a questionnaire form on selected intellectuals and opinion leaders in Japan, China and South Korea between March 19 and March 25, 2014. Survey questions were emailed in Japan to those who had participated in discussions organized by The Genron NPO in the past and 297 people responded. In China, 93 people responded to the same survey. In South Korea, the East Asia Institute, chose those to be surveyed and 477 replied. The respondents are viewed to represent the intellectuals and informed commentators in their respective countries. It should be noted that percentage figures of the survey replies are often rounded and/or based on multiple replies, and therefore do not always total 100%.