The Genron NPO released Aug. 19 the results of an opinion survey on the issues facing democracy, which it conducted jointly with leading think tanks in Indonesia and India.

The three-country joint poll, the first of its kind, covered about 1,000 adults in each of the three countries. The Indonesian partner was the Centre for Strategic and International Studies (CSIS) and the Indian partner was the Observer Research Foundation.

The findings were presented to the open forum on democracy, which was organized by The Genron NPO in Tokyo on Aug. 19, with 14 experts from the three countries attending as panelists.

The joint survey found that only 20.7 percent of the respondents in Japan were optimistic about the future of their country, compared to 39.8 percent, who held a pessimistic view. Asked to choose up to two reasons for their pessimism, 84.7 percent cited "the rapid aging of society and declining population," followed by "economic stagnation" (51 percent) and "the growing risk of financial collapse" (45.0 percent).

In contrast, 65.3 percent of the Indonesian pollees had an optimistic view about the future of their country and the equivalent for India is as high as 75.9 percent, according to the poll.

In response to the question "Is democracy functioning appropriately in their respective country," the largest portion of the respondents replied positively in all three countries. In Japan, 46.7 percent replied either "democracy is functioning appropriately" or "it is relatively doing so." The equivalent figure was 47.1 percent in Indonesia, and as many as 65.0 percent of the Indian pollees replied positively.

The survey examined the people's expectations of political parties in solving issues or tasks and in ensuring economic development. In Japan, 51.7 percent said they cannot count on political parties for the solution of important issues, far outnumbering those of the opposite view, or only 15.5 percent.

However, 58.3 percent of the Indonesia pollees replied they are pinning their expectations on political parties and the comparable figure was as high as 85.9 percent in India.

According to the findings, the largest number, 38.9 percent, of the pollees in Japan, one of the U.S.'s closet allies, favored "the supplementary role of the United States," followed by its "hegemonistic role" with 27.9 percent. Only 3.5 percent favored "U.S. non-engagement."

Meanwhile, the largest number of Indonesian pollees, 38.7 percent, favored the "non-engagement of the United States," followed by the "supplementary role" with 33.3 percent. Combined, more than 70 percent of the Indonesia people polled had a negative view of the role the United States has been playing in the world to date.

Conversely, an overwhelming 63.7 percent of the pollees in India replied they would like to see the continued engagement of the United States in world affairs with 20.3 percent favoring the "supplementary role" and 4.5 percent "non-engagement."

Future of the Country

How do you feel about the future of your country ?【Choose one】 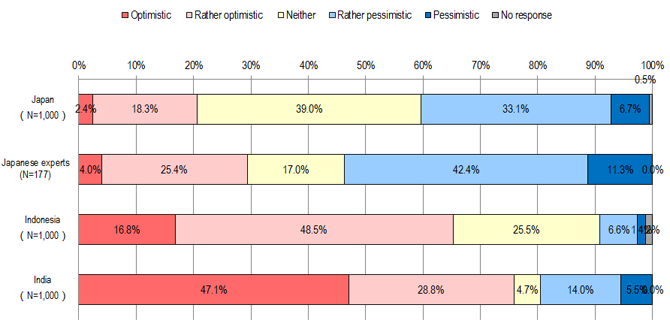 Reasons behind the Pessimism

(For those who reply in the previous question that you are either "Pessimistic" or "Rather pessimistic"), why do you feel that way? 【For public : choose as many as you like / for experts choose one】 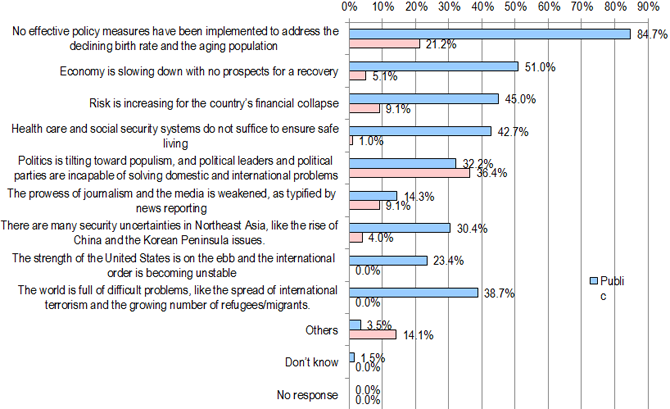 (For those who reply in the previous question that you are either "Pessimistic" or "Rather pessimistic"), why do you feel that way? 【choose one or more options】 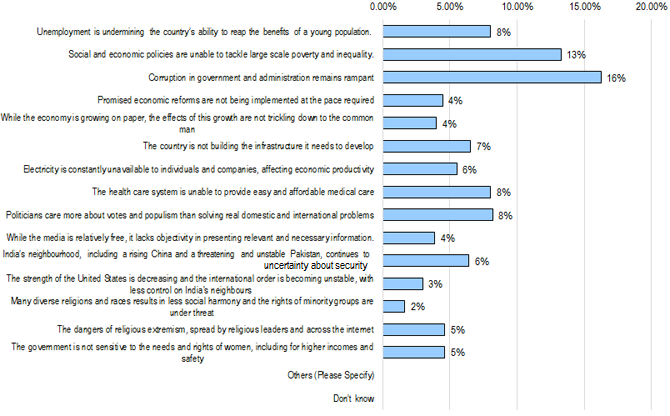 (For those who reply in the previous question that you are either "Pessimistic" or "Rather pessimistic"), why do you feel that way? 【choose as many as you like】

Do you think democracy in your country is functioning well ?【Choose one】 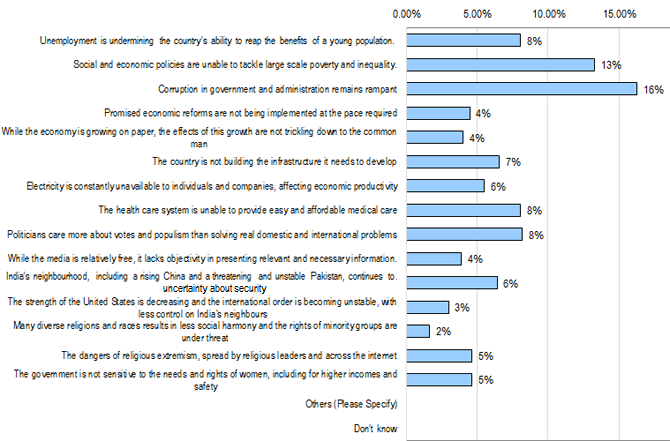 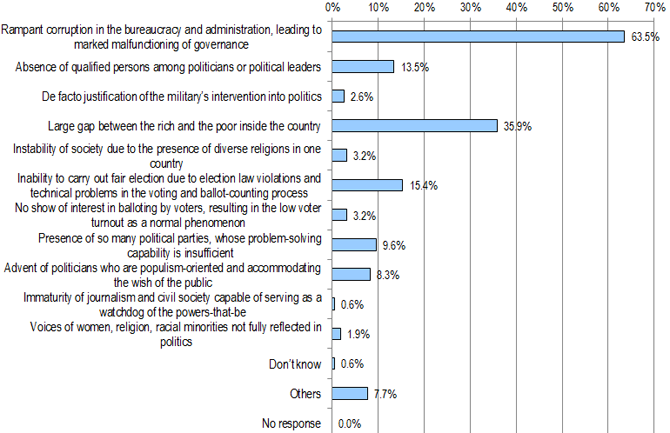 In pondering upon the future development of democracy in your country, what do you think will be the biggest challenges for reforms? Please choose up to two. 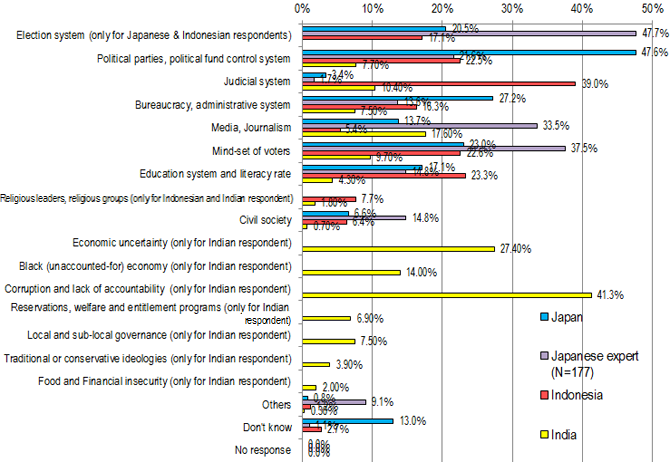 Do you have expectations from the political parties of your country to solve the problems facing your country now or to steer economic development? Please choose one option.

Is the election system fair ?

Do you think that the election system of your country is a fair one that reflects the public opinion appropriately? Please choose one. Does the Bi-cameral system work? (India only)

The upper house of parliament (Rajya Sabha) is necessary for democracy. Please choose one option. 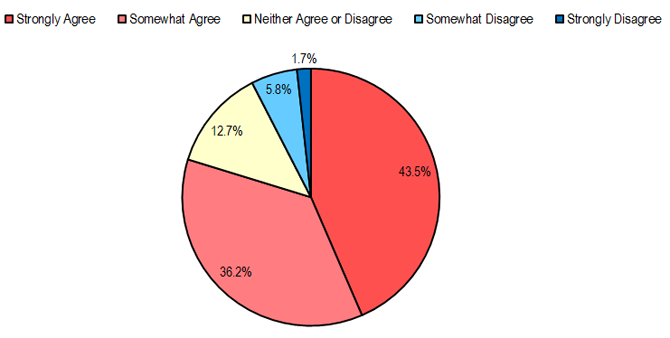 Democracy in the World in past 10 years

How do you think democracy in the world has changed over the past decade? Please choose one option. What is your view about democracy? Please choose one. 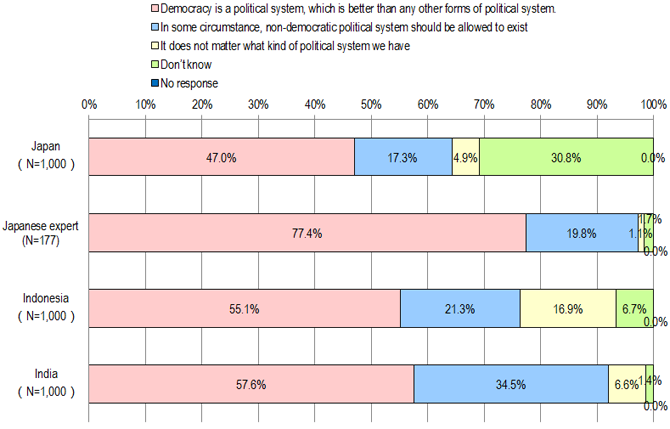 Today, the public is inclined to seek strong political leadership in many countries of the world amid the globalization and the growing instability of international order. What is your view about the desired modality of leadership by political leaders of your country? Please choose one. Will Democracy expand to other countries?

Do you think the number of countries, which adopt democracy as a political system, will increase in Asia or I the world, at large, in the future? Please choose one. The Role of the United States

What is your view about the role of the United States in the world?  Please choose one. 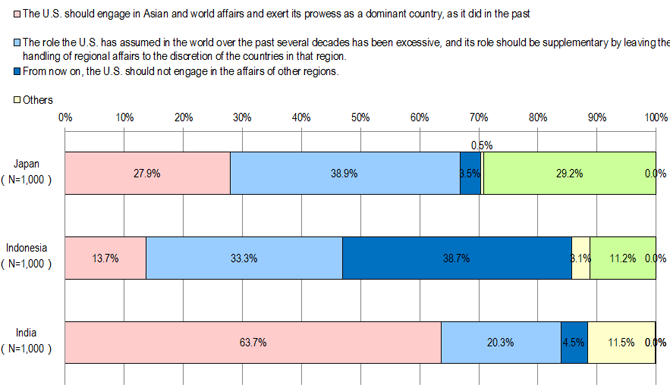