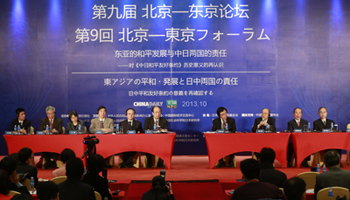 The "Beijing Consensus" adopted at the end of the latest Tokyo-Beijing Forum represented a message not just to Japan and China but also to the world as it contained a "no-war" declaration, if not an intergovernmental one, between the two countries.

The meeting came at a time when Japan and China are at odds over, among other things, a territorial dispute involving a group of islands in the East China Sea, but a total of as many as 3,000 people turned out to watch or participate in the two days of discussions among about 60 panelists from the two countries. About 300 volunteers, mainly youngsters, from both countries also came to support the annual private-sector dialogue.

When intergovernmental diplomatic efforts have hit a snag, people in the private sector should think about what they can do to help improve the situation. We, the Tokyo-Beijing Forum organizers on the Japanese side, believed that efforts should be made through the meeting to lay a foundation for starting calm private-level discussions between Japan and China to help find a way out of the situation. A tense atmosphere remains in the waters around the disputed islands in the East China Sea, as Japanese and Chinese coast guard ships seek to stake their claims almost every day. If nothing is done, a single accidental shot could ignite military conflict between the two countries. Our interest centered on who should and who can prevent the territorial dispute from worsening, now that a solution is unlikely to be hammered out immediately in government-to-government diplomatic negotiations.

In order to change this, we came up with the idea of making a "no-war pledge" as a private-sector initiative between the two countries. "Whatever happens, we oppose any course that opens the way for a war between Japan and China." This was what we aimed for in the proposal. This means that it is important to make a "no-war" declaration as a basic, common notion between the two countries' peoples. When private-sector people become aware of its importance, it will become public opinion in the two countries and then it will amount to a concrete message to international public opinion. We also thought that this would make clearer what must be addressed first of all between Japan and China in their diplomatic negotiations.

Now that the Beijing Consensus has been released, we hope that its importance will be considered by people from various sectors in the world. "Japan and China will never go to war." This common perception will be forged at a grass-roots level between Japan and China, and then, the view that any military dispute should be precluded by all means in East Asia will be created as worldwide public opinion. When such an environment is created, we believe that clues will be found to resolve various serious problems in this part of the world.

When private-sector organizations and people have to help break an impasse in intergovernmental diplomatic negotiations, they must be aware that they should behave as "stakeholders" in these circumstances.

Yuji Miyamoto, a former Japanese ambassador to China, told me that when he was in Beijing, he felt that the time was over when diplomacy is restricted to governments. Ambassador Miyamoto was instrumental in organizing the latest forum in Beijing as deputy chairman of the Japanese Executive Committee. His remarks meant that public opinion cannot be ignored any longer in intergovernmental diplomatic negotiations. Any wiggle room for intergovernmental negotiators tends to be limited as public opinion becomes heated and stirring statements are heard more often. Various people may be influenced by the course of public opinion. Therefore, in order to let diplomacy function properly, it will become very important for the private sector to strive to create healthy public opinion.

It has become more difficult than ever for intergovernmental negotiators to communicate with each other and build a consensus. A solution to global warming and how to establish a new political order in East Asia are examples of this tendency. It is difficult to find a solution only through negotiations between countries. In the meantime, challenges facing the world are becoming more and more serious. The bottom line is who should solve these problems. The answer is that the parties involved should be aware of their roles as stakeholders. This idea is coming up for discussion in international society. Various kinds of people, such as researchers, journalists and entrepreneurs as well as government officials, should participate in a solution process as experts and as stakeholders.

Governments should participate in such a framework of efforts for a solution, or they can use a consensus that may be obtained in a solution process. If this kind of process is established, a consensus between stakeholders will become more effective, I think.

Problems facing East Asia, particularly the territorial dispute over the Senkaku Islands between Japan and China, are very difficult issues to resolve even through dialogue between stakeholders. This is because the territorial issue is a problem on which the two countries' governments and peoples alike cannot yield. But nothing can be solved if a war breaks out between Japan and China over the territorial dispute. Somebody should come forward to address this problem. The calmer public opinion becomes, the easier intergovernmental negotiations will be to push. Former Chinese leader Deng Xiaoping once remarked that a solution to the territorial problem between Japan and China should be put to the wisdom of people of the next generation. This remark was based on the belief that a new wisdom cannot be found unless there is a political environment where calm discussions can be held, I think. Therefore, a calm environment must be established for intergovernmental diplomacy to function properly and to this end, there must be moves in the private sector in pursuit of calm discussions to find a solution. Today's diplomacy has reached a stage where government and private-sector techniques should be combined. Therefore, a role to be played by what can be called private-sector diplomacy has become very important.

Private-sector diplomacy must be carried out in a neutral and independent manner that is open to citizens so that their support can be obtained.

In our initiative as to the style of public opinion-conscious, private-sector diplomacy represents our view about how democracy should be in each country and how civil society should be. Our pursuit of private-sector diplomacy may be seen as an effort to find answers to whether democracy and society are functioning in each country, and whether these efforts can transcend national boundaries.

Democracy and civil society may be restricted in a certain environment. If such an environment exists, cross-border discussions may also be restricted. In Japan-China relations in recent years, discussions have been sometimes restricted against a backdrop of the differences in their social systems and heated nationalist sentiments. This time, people concerned from both countries have struck an agreement despite the difficult situation. This may be seen as a historic achievement, I think. At a time when the private sector's role in helping to improve diplomatic relations is questioned, many people believe that it will be difficult for Japan and China to break an impasse in their diplomatic relations unless there is some private-sector initiative.

Challenges we have addressed so far through the Tokyo-Beijing Forum are challenges not only for us, the participants in the series of dialogues, but also for many citizens. Calm discussion about what must be done to prevent the Japan-China rivalry from leading to a war will begin among various people and in various fields. Such a discussion will be initiated by forging healthy public opinion and this will become a process to make a strong democracy, I think.