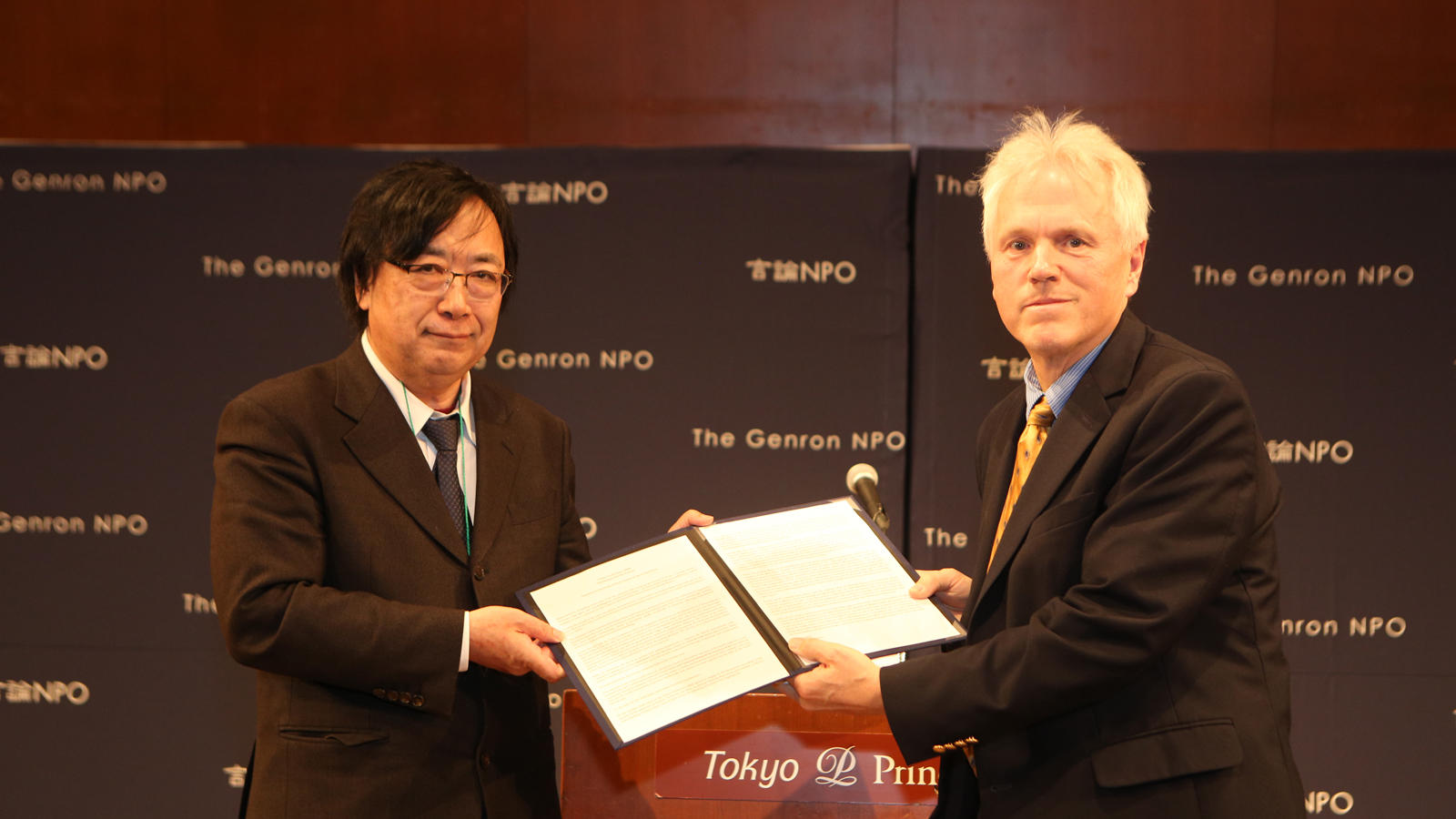 Representatives of leading think tanks from the countries that comprise the Group of Seven - Canada, France, Germany, Italy, Japan, the United Kingdom and the United States - as well as India, Singapore and Brazil, worked together to issue a statement for the Tokyo Conference 2020 held on February 29 and March 1.

Despite the spread of the new coronavirus, representatives of the world's ten leading think tanks took part in the joint effort by the Tokyo Conference because recent developments require us to renew our resolve and commitment to our values.

The economic rivalry between the United States and China has developed into a battle for technological hegemony during the past few years, and the prospects for the liberal international order have become increasingly unclear. The trend toward unilateralism, which is spreading rapidly worldwide, is adversely affecting international cooperation and multilateral consensus-building.

As was the case with the Tokyo Conference 2019, we engaged in discussions on the future of U.S.-China relations because there is the risk that the strategic competition between the two major powers can deepen and last longer than anticipated. The spread of novel coronavirus to the world highlights the fact that countries deepening their interdependencies where an incident such as this would trigger chain reactions around the world simultaneously. Solution to common issues can only be generated by reciprocal cooperation. However, the future of the liberal international order, which has been sustaining global prosperity to date, is precarious. We must face the possibility that the world economy will be plunged into major disrupting divisions. We are now at a critical juncture when major democracies must unite and launch a new joint endeavor.

What we ultimately aim for is to protect and update frameworks to support the liberal international order. Competition among the world's superpowers should take place within an arena of a rule-based open market. Major countries should join forces to find a way out of the current confrontations through cooperation and coordination.

No new momentum will emerge unless we make such a resolve now.

The outcome of the current confrontations should not result in the further fractures of the world order but a new framework for the coexistence between the United States and China and among all the members of the international community should be based on rules and develop under a reinforced liberal international order. Indeed, now is the time for the world's democratic countries, intellectuals and citizens to come together for the sake of the world's liberal order.

To this end, we, the think tanks, must make proactive contributions.

All the member think tanks of the Tokyo Conference 2020 agreed to engage in the discussions according to the statutes of the respective institution. In the last two days, we had far-reaching discussions and reached a common understanding on many issues. Out of these issues, the following five points were highlighted.

First, this year's Group of Seven chair the United States is in the midst of presidential election campaign. We strongly hope that the United States will duly weigh its role in international community and continue to take a strong leadership role as it assumes presidency of the G7. The major democracies, including other G7 member states should cooperate to defend the liberal international order and strive to be at the center of that order into the future. To this end, the G7 member states should take the lead in rule making and in multilateral cooperation to maintain global stability and find solutions to global issues.

Second, with the further deepening of the U.S.-China strategic competition, depending on the developments of America's export control regulations based on the entity list and investment reviews, there is the strong likelihood of U.S. allies and other countries being forced to make difficult decisions on all policy issues with relation to security considerations. Nonetheless, the major democracies should maintain solidarity and strive to avert schism in the global economy. On the other hand, China should be prepared to accommodate the principle of reciprocity in economic and trade relations with the rest of the world, if it seeks equal access to the global market. We must adopt measures to ensure a level playing field in the global economy while pressuring China to carry out necessary reforms of its domestic economy. But our aim should not be the exclusion of China.

Third, rule-making efforts are not keeping pace with fast-paced technological developments, including the rapid progress of the data-driven economy and artificial intelligence (AI). That said, key actors have undertaken initiatives aimed at creating new rules, as evidenced by the U.S.-Japan Digital Trade Agreement reached last fall, and consultations between Japan and the European Union on similar matters are under way. The G7 should take the initiative in these kinds of efforts and promote their multilateralization within such institutional contexts as the World Trade Organization (WTO). Striving to protect the liberal international order means that we should take a proactive approach to formulate new rules which could support co-existence of countries under such an order. In this process we must jointly redefine the liberal order we should strive for. We should all make efforts to include China in the process. Addressing global problems such as climate change and achieving sustainable growth are also urgent issues.

Fourth, the G7 member states, which share the common values of individual freedom and democracy, should cooperate in efforts to boost the internal strength of each state, at a time when the world is entering a phase of strategic competition. In order for the democracies to defend the liberal international order, we must ensure that our people at home benefit from the fruits of globalization, and incentivize sustainable and inclusive growth, both globally and domestically. To this end, we must focus on domestic efforts to enhance our competitiveness which may include proactively promoting education, infrastructure investment and technological advancement.

Fifth, the G7 member states should strive to make their respective democratic systems more resilient. In order to contain the growing tendency toward authoritarianism and populism on display in many democracies, we must rebuild a problem-solving cycle of democratic institutions, and restore public trust in representative democracy. It is also necessary to reinforce the checks and balances systems as well as the rule of law and, more importantly, to defend the society where citizens have the right to self-determination. In accordance with this view, intellectuals, independent media organizations and think tanks must contribute to this effort. This historic challenge, upon which the fate of freedom and democracy hinges, can be won only by seeking broad public support from all over the world. 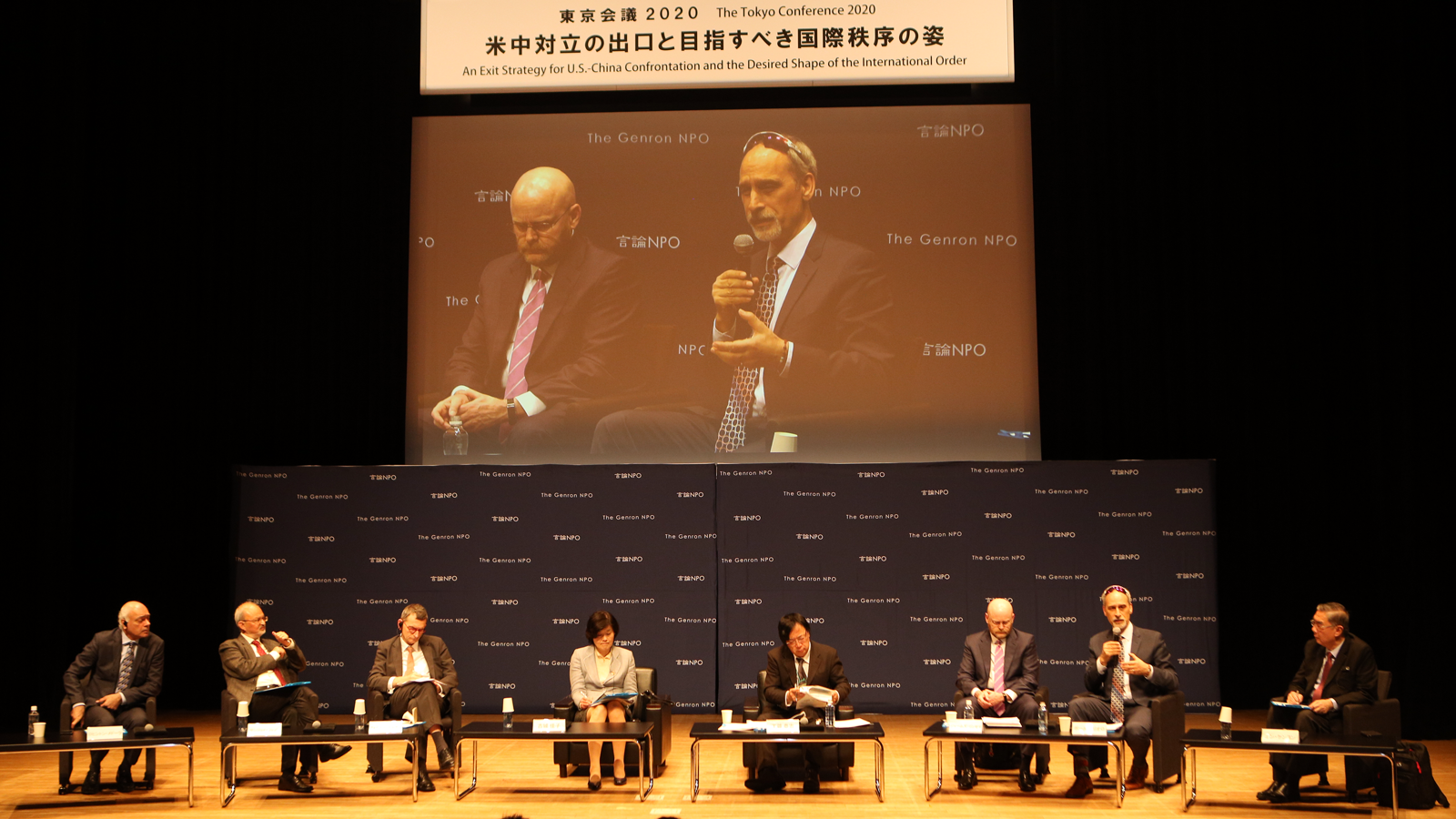 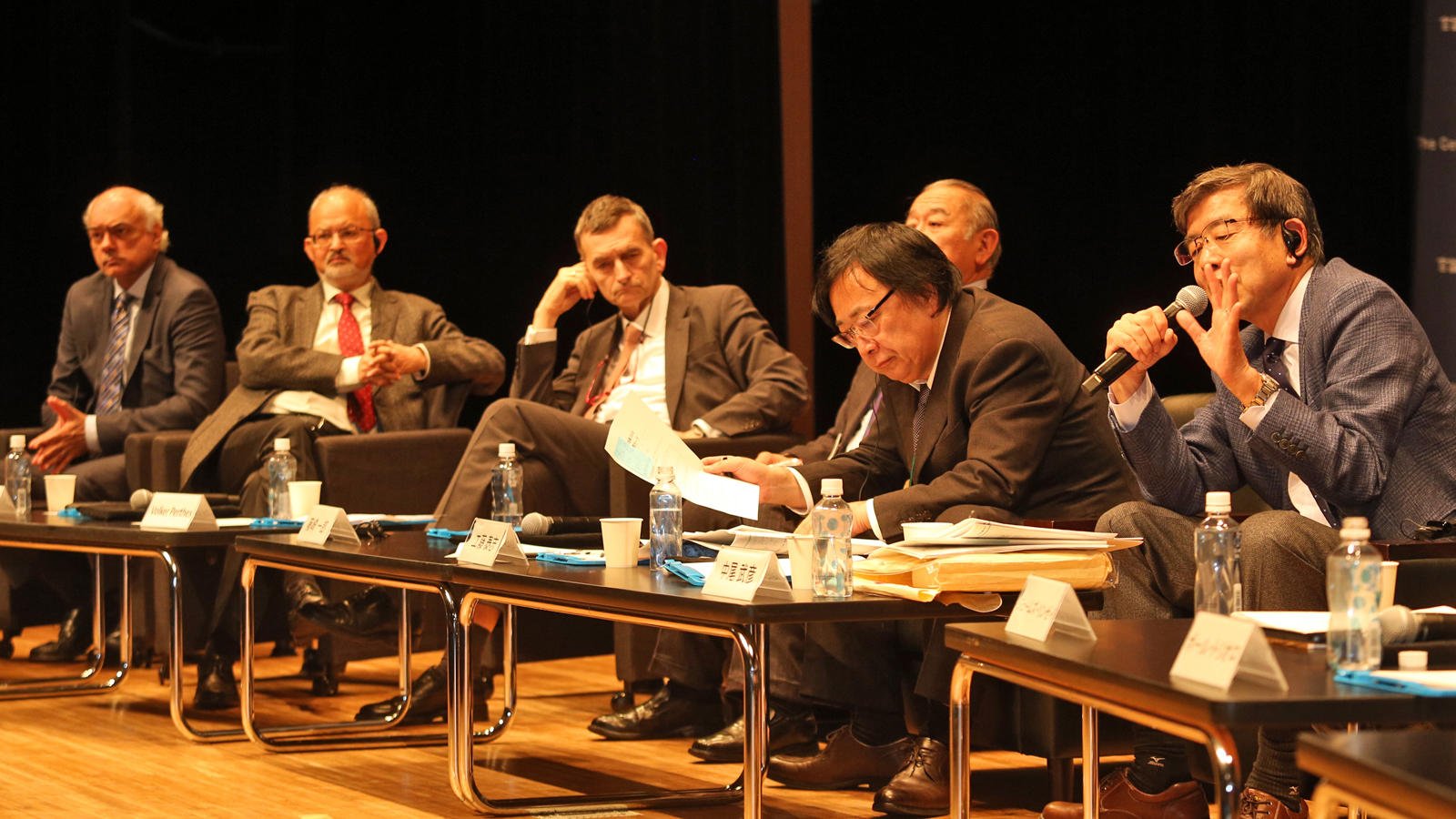 The significance of the U.S. presidential elections and determining the form of a new international order 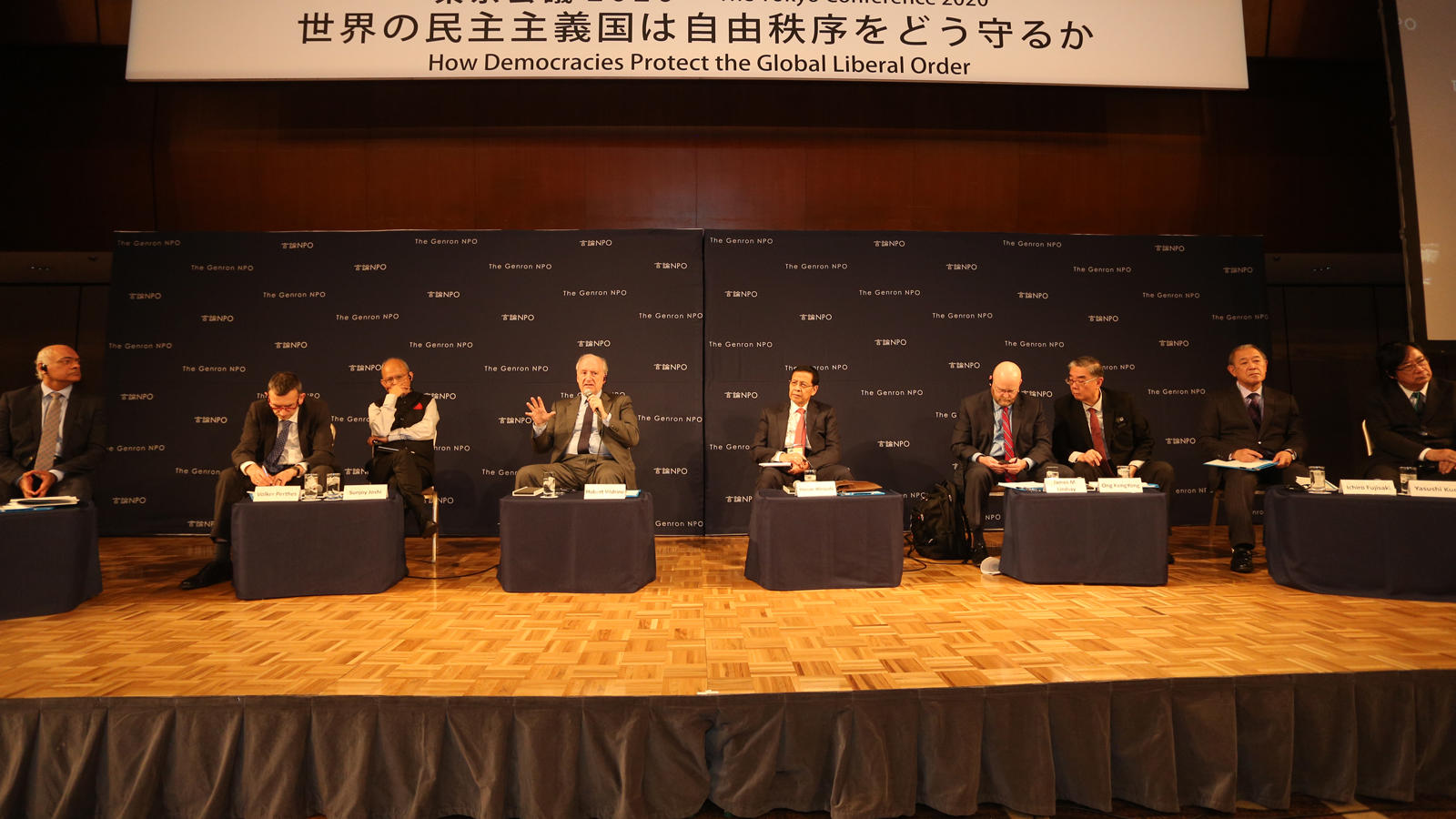