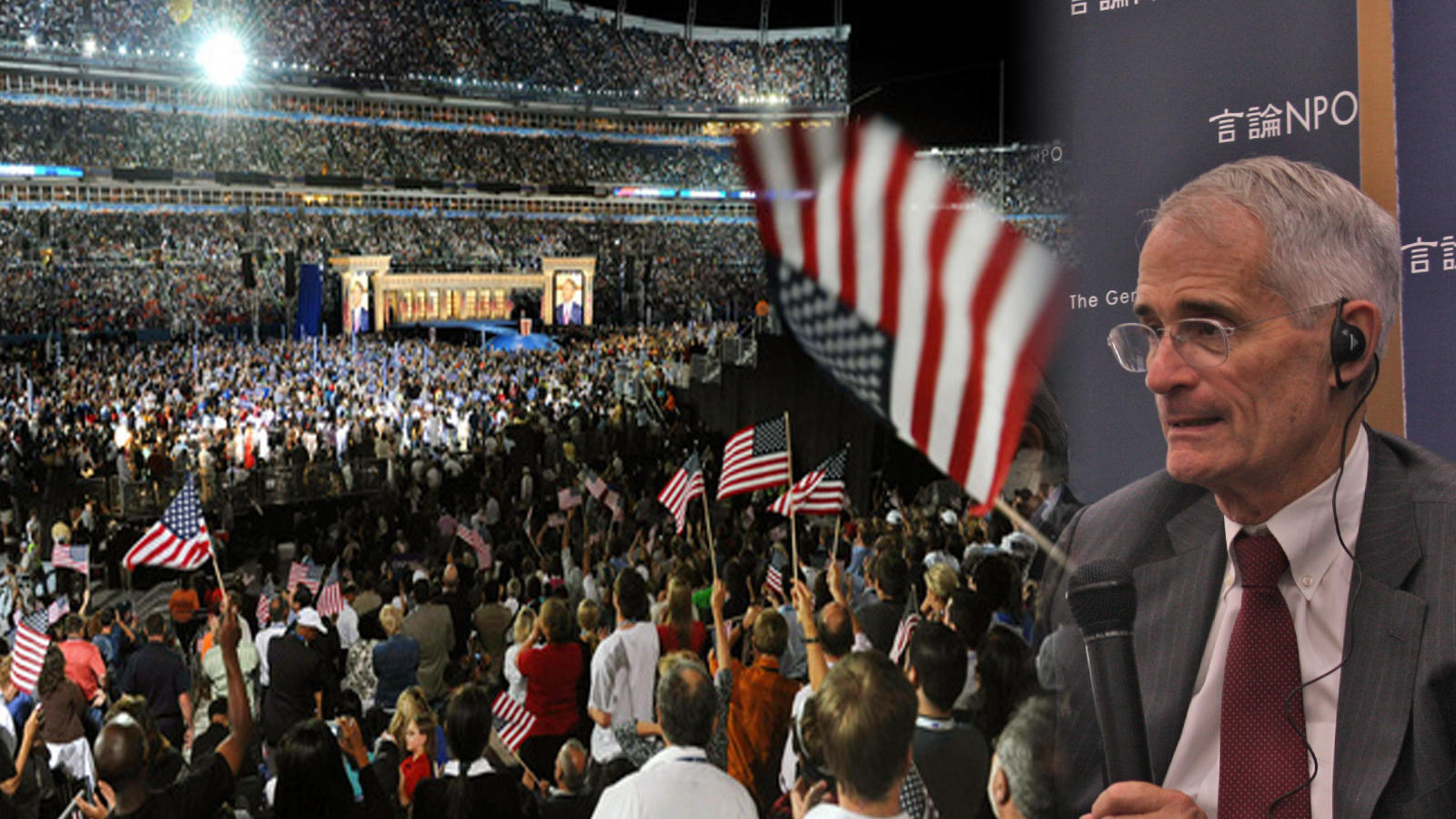 The 2020 U.S. presidential election
- What can we expect?

The Genron NPO recently held a public forum in Tokyo to discuss the upcoming U.S. presidential election and the state of democracy in the United States.

The Sept. 9 forum was attended by Bruce Stokes, a former director of the Pew Research Center, a U.S.-based organization that polls public opinion worldwide. Also taking the stage was Glen S. Fukushima, a senior fellow at the Center for American Progress, former deputy assistant U.S. trade representative for Japan and former president of the American Chamber of Commerce in Japan.

Joining these two were Yasushi Watanabe, a professor at Keio University specializing in U.S. society in his position as a cultural anthropologist and scholar of international politics, and Yasushi Kudo, president of The Genron NPO, who moderated the discussion.

Stokes began by providing an overview of the results of a survey conducted in the United States and an explanation of the societal structure of the country under the administration of President Donald Trump.

"This is a pattern in American history and we're living it again today," he said. He also explained his theory that "something besides the economy" is behind Trump's win in 2016 by pointing to polls taken in his hometown.
That survey showed that how people evaluate the state of the U.S. economy depends on their party affiliation, with a higher percentage of Republican supporters rating it positively and a lower percentage of Democrat supporters seeing it as doing well.

"Look at the partisan division," Stokes said. "It is 79 percent of Republicans but only 33 percent of Democrats. People look at the same economy, which is in fact very good, and see two different things. Is this about the economy? Or is it about, if I'm a Republican, everything is wonderful, and if I'm a Democrat, everything is horrible?"

Stokes pointed to other areas where supporters of the two parties differ.

"Republican Americans believe that the U.S. way of life needs to be protected from foreign influence; they believe that society has changed for the worse. This explains Trump's popularity. He is going to protect his base from the world."

After Stokes' presentation of the U.S. opinion polls, Kudo asked the panelists their opinions on whether this division in U.S. society will grow during the next presidential election.

Watanabe presented a somewhat pessimistic view, noting that "There is no historical example of recovery from such a great division anywhere in the world."

However, for Watanabe, the division is not a result of Trump's rise to power; he sees it rather as a symptom of a complex integration of economic inequality and demographic changes, and changes in the information environment. Watanabe noted that the appearance of a "strongman"-type leader is a common phenomenon in democracies in which public consensus has begun to lean toward increased isolationism, and subsequently, "my country first" thinking has begun to spread.

While Fukushima essentially agreed with this perspective, he believes that in the mid- to long term, there may be a directional shift. He touched upon the prediction thatwhite people will no longer be the majority in the United States by 2044, and that non-white and young voters tend to have a more positive view of free trade, immigration and measures to halt climate change. This suggests that policy trends may in fact change in future.. In fact, California is ahead of the rest of the country in terms of a demographic shift. Pointing to the example of California's governor, whose policies are completely opposite to those of Trump, he said, "In the medium to long term, this is the future of the United States."

Kudo next asked the speakers to consider the upcoming presidential election.
"Trump's behavior is causing friction in the global free market and in multilateralism itself," Kudo said. "Nevertheless, he seems to be using the same tactic of dividing the country by creating enemies in the form of the government, immigrants and others. Will this approach still work in the United States?"

Watanabe answered that what will decide the upcoming election is "whether either party can generate enough enthusiasm among supporters to bring them to the voting booths."

In past presidential elections, Watanabe stated that there has been a strong trend toward outsiders to contemporary politics. In this case, the Trump camp will be able to utilize that trend to mobilize support. He can point to former Vice President Joe Biden, who has 40 years of experience as a Washington insider, and say that "nothing changed during his time in office." He can also shift the blame for why his policies failed onto Biden's shoulders.

Watanabe believes that the Democrats must take a different path. They have to determine just how far the "we may as well keep Trump" opinion has transcended party lines.

Kudo asked the speakers what will happen to the current divisions in the global economy arising from the conflict between the United States and China if a Democrat wins the next election.

Regarding climate change, he foresees greater action being taken, but noted that people "get nervous" discussing climate change because measures often require some sort of sacrifice. Dealing with Iran, Stokes sees the Democrats wanting to rejoin the Iran nuclear agreement, but "the problem is the Iran agreement may be dead by then."

"I think the Democrats would certainly be tough on Russia, but within limits," Stokes continued. "But other than that, they would not be as friendly with Putin, it's not clear what they would actually do."

Finally, Stokes stated his belief that if a recession is to come, it will most likely come after the election in 2021.

"Which means the Democrats could inherit a declining economy and that could preoccupy them," he said. "They would get some of the blame, even if it wasn't their fault. Their role in the world may actually be less than anticipated because they would have to deal with this economy."

Later in the discussion, Stokes brought up another point regarding the U.S. role on the global stage.

Watanabe pointed out that among Democrats, there is little recognition of Trump's platform that the United States is being taken advantage of by the international framework and its allies, including Japan in the security sphere. However, he said that with the Democrats traditionally backing protectionist policies, that may come to the forefront in trade with China. He added that "People should also refrain from any overly optimistic expectations regarding U.S. trade with Japan."

Regarding the current election cycle, Watanabe referred to the polls suggesting that Biden is currently one of the front-runners in the race to be the Democratic candidate, but also pointed out the possibility that either Senator Bernie Sanders or Senator Elizabeth Warren, both of whom have similar positions, could eventually pass Biden in the polls. This leaves the answer of who will get the Democratic nomination still up in the air.

Fukushima referred back to the Genron experts survey that showed a majority of those polled predicting a victory for Trump in 2020 and explained that Japanese experts have a better chance of being exposed to favorable opinions of Trump's policies. Many people connected to the Republican party are part of the world of business, and when they come to Japan to explore business opportunities, they essentially provide PR for the Republican party when speaking with Japanese economists, politicians and bureaucrats. Fukushima also pointed out that many former Democratic presidents were unknowns even a year before the election, so "the people like Warren and Senator KamalaHarris, who are untarnished by the politics of Washington, may be promising. During the March primaries in California, a densely populated state, they may be able to drum up a lot of support."

Kudo ended the discussion by pointing out that from the perspective of protecting freedom, democracy and multilateralism, a close watch must be kept on future presidential election trends.