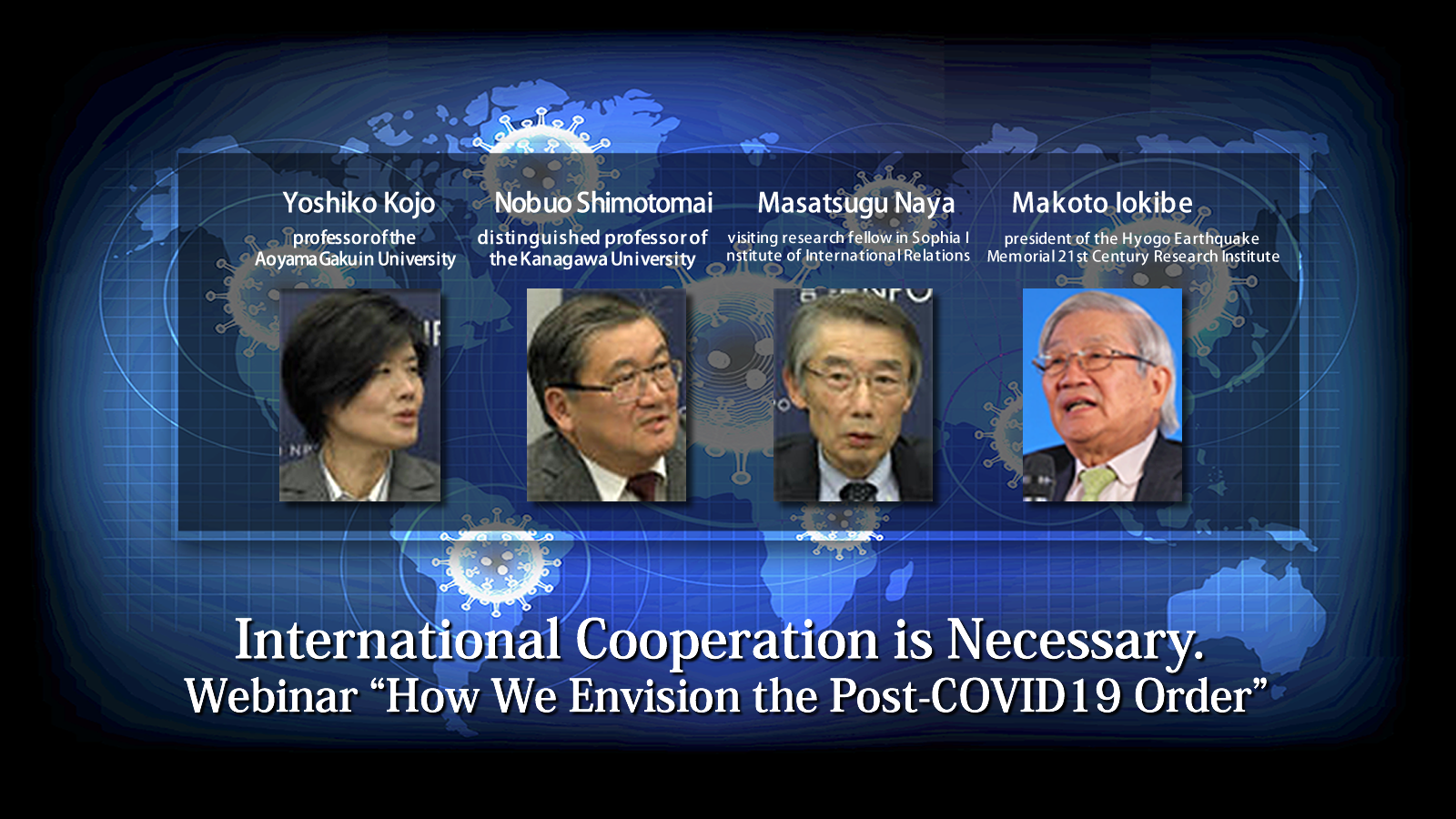 International Cooperation is Necessary. Webinar "How We Envision the Post-COVID19 Order"

Regarding the crisis management performance during the COVID-19 outbreak, there has been an argument that authoritarian regimes have more advantages than democracy during the crisis time. Four experts concurred that we need to reappraise democratic system given facts that some democratic countries has recovered public trust by interacting with their citizens and providing reliable information, and close collaborations between government and scientists, while authoritarian governments can take more forceful and quick measures in the crisis. Experts also added it is highly important to consider the roles of the governments, citizens and public sectors.

Mr. Yasushi Kudo, president of the Genron NPO, served as a moderator and asked Dr. Iokibe what meaning this crisis of COVID-19 has for global order.

The COVID-19 crisis and global order

"Losing lives of tens of millions due to the Spanish Flu a century ago in fact stopped the war in ceasefire in November, 1918 and led the world to peace and cooperation. However, this COVID-19 virus globally spread amid increasing populism and the U.S. - China tension," Dr. Iokibe pointed out. And he said it is necessary to make more efforts to reinvent global order and system and European countries and Japan should play the vital role in weakening American leadership.

Dr. Naya said, "global economy has already stalled before this COVID-19 crisis." He insisted that the world needs new principles and rules to reset global economy from the stand points of personal life, freedom and human rights rather than technological breakthrough. He also added that this COVID-19 crisis seems to be a great opportunity to question the mean of neo-liberalism and find a new philosophy.

Is global cooperation an illusion?

Next, Mr. Kudo pointed out that cross-national agendas such as infectious diseases and climate change needs more multilateral cooperation but there is less global leadership so far in the COVID-19 pandemic. He asked four experts if global cooperation is an illusion.

Dr. Kojo showed her view that if the concept of global cooperation is not enough, we need to deepen this idea. She added her concern that "division" in the society might have huge impacts on global cooperation which requires domestic support, bringing the example of the rise of nationalism supporters. She also added that it is difficult to recreate global cooperation regime that will be mutually beneficial especially addressing inequality issue.

Dr. Iokibe said the COVID-19 pandemic will not be controlled without a better global cooperation. However, the sad reality is exacerbating China and the U.S confrontation and narrowing views due to domestic fragmentation in Europe and South Korea. He insisted that this trend would undermine post-WWII order such the United Nations and free trade regime, and asserted "our biggest challenge id how to overcome the division at home and globally".

Authoritarian vs democracy in the pandemic

Next, Mr. Kudo introduced an example of authoritarian countries performance during the COVID-19 outbreak. Dr. Shimotomai said that there is an ongoing discussion of whether authoritarianism or democracy can deal with this crisis better.

He pointed out that there is a simplistic view that authoritarianism is dealing with the crisis better as the number of COVID-19 related deaths is higher in Europe than Asia. He also mentioned that it is necessary to look at each country's situation closely.

In this point, Dr. Naya said that authoritarianism seemed more efficient during lockdown. However, he explained, "it is democratic governments to tackle infectious diseases in flexible manner by providing reliable information and engaging in civil society".

Here, Dr. Iokibe pointed out that the power balance between China and the United States might lean towards Chinese side, especially in developing world and neighboring countries. China is now exaggerating its performance in stopping the outbreak with a forceful measure and restarting its economy while it was also hiding what was happening in Wuhan for the first two months. Meanwhile he also highlighted the Japan's role in order to encourage China to sincerely regret after its loss of trust from a larger perspective in global politics.

Lastly, Mr. Kudo stressed, we are in the important moment to discuss how democracy should be after the pandemic when we have seen many weaknesses of democratic systems, and asked experts' views. Dr. Iokibe said, "how much scientific knowledge the countries can integrate into political decisions is representing the level of democracy", mentioning the example of Germany.

"There is a greater expectation to the roles of the governments in the crisis while people admired a small government in the past", Dr. Kojo then added. She stated, however, that it is fiscally unrealistic, and now is the time to reconsider to how much degree we expand its side and role.

Finally, Dr. Iokibe wrapped up the discussion, "ideal democratic governments would gain public approval in the temporary use of forceful power in an emergency, financially compensate affected people and completely return to democracy as early as possible. This is a way of matured democracy", he said.