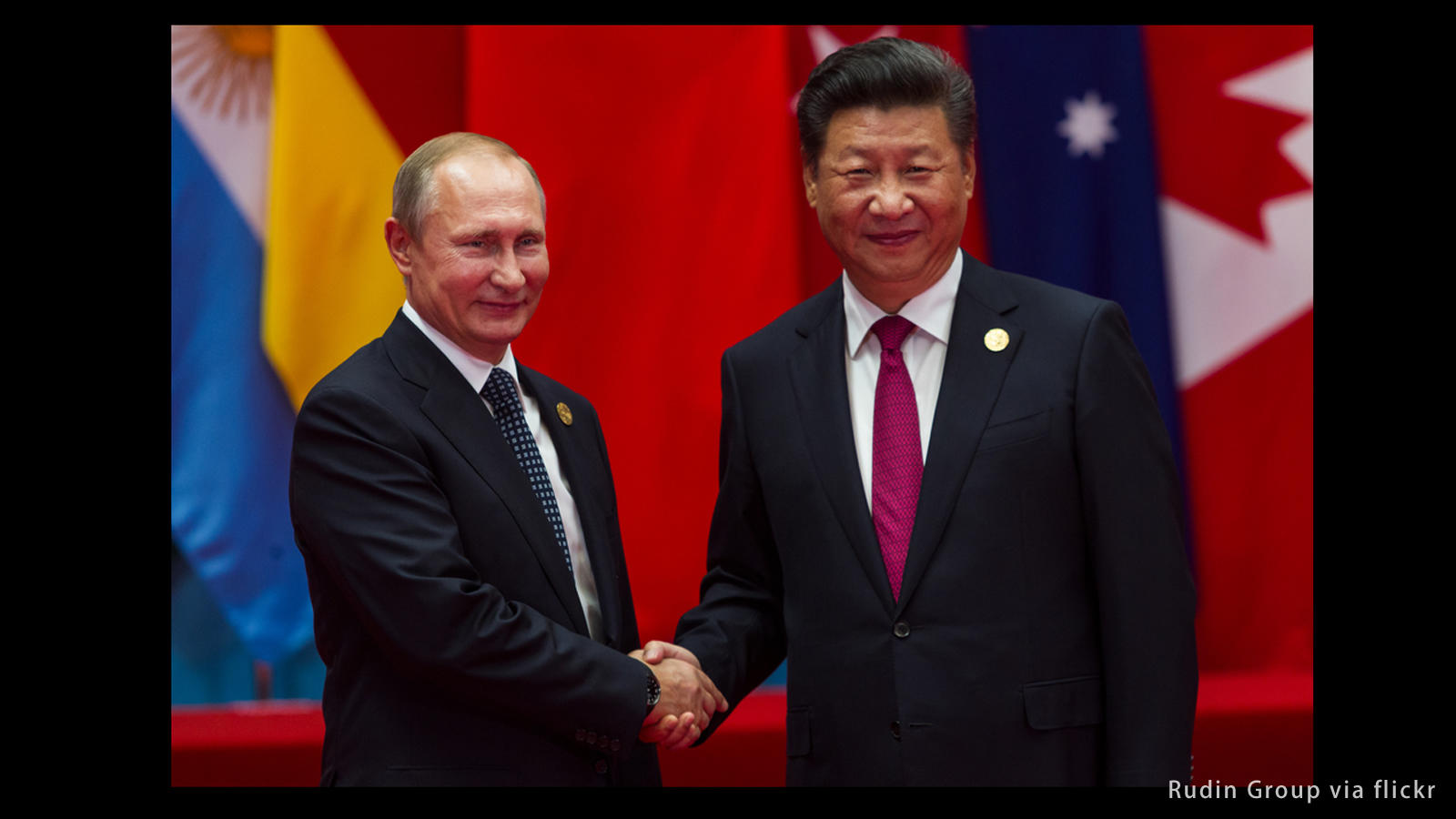 The Genron NPO and the Shanghai Institute for International Studies (SIIS) came together for a joint holding of the 4th Japan-China Security Dialogue on June 13, 2022. Participants from Tokyo and Shanghai met online for discussions about China's stance regarding the Russian invasion of Ukraine and about how China will move forward towards peaceful reunification with Taiwan.

Participants from China, while stressing that their opinions were their own, expressed their understanding that China opposes Russia's behavior. In addition, while China's response may seem unclear due to NATO's eastward expansion and the personal relationships shared by Chinese and Russian leaders, it was repeatedly noted that China does not wish to stand with Russia.

From the Japanese side, it was argued that China should act in accordance with the Charter of the United Nations and make its opposition clear as an advocate of the peaceful global order. Some Japanese participants also suggested that China may have developed a habit of viewing the world the lens of its strategic competition with the United States, which may be preventing it from clarifying its position.

The forum was attended by the following individuals.

Goal of the dialogue: To find concrete measures to achieve peace in Asia and not simply analyze the current situation

Opening remarks were given by representatives from the two sponsors of the forum.

SIIS President Chen Dongxiao pointed out the deteriorating state of the security environment worldwide before noting that a major issue for China and Japan will be how to control the security impasse the two countries find themselves in. Genron President Yasushi Kudo added his own voice to this by expressing his sincere hope that the participants would discuss concrete measures to restore order in the region and achieve true peace, rather than simply analyzing the situation as it currently stands.

The first keynote address was provided by Cheng Yonghua, former Chinese Ambassador to Japan. Cheng pointed out that although China and Japan had come to an agreement on building a constructive security relationship, movement towards achieving such a goal came to a halt during the administration of former Japanese Prime Minister Shinzo Abe. He recommended that both sides look to find avenues of cooperation, such as through military personnel exchanges, crisis management mechanisms and other measures aimed at resolving real issues, rather than get bogged down in ideological differences. He also offered a few words of caution for Japan, warning it not to swing too far towards the United States as that country shifts its focus to the Asia-Pacific.

Former Japanese ambassador to China Yuji Miyamoto followed up by stating that Russia's invasion of Ukraine has had a profound impact on the post-World War II international order, and has dramatically changed how Japanese society views the world. He also said that it seems to the West that Russia and China are becoming more united, and warned that a virtual Cold War structure has emerged that, if nothing is done, could transform from virtual into actual.

Miyamoto also said that the 50th anniversary of the normalization of diplomatic relations is an important juncture that can be used to reassess the relationship while remembering the warnings of their predecessors to avoid war, and he emphasized that both countries should be formulating a vision of what should be done.

"That is the responsibility of experts ? it is their duty to history," he said.

In the forum's first session, participants discussed Russia's invasion of Ukraine and the future of the peaceful global order. Professor Yu Tiejun of Peking University opened by explaining the Chinese government's position. He emphasized China's respect for Ukraine is based in the fundamental respect China has for the sovereignty and territoriality of all countries, however, he added that China also understands the Russian perspective due to the historical context between the two countries and issues of Russian national security. Yu said that this has put China in a difficult position because of its friendly relationship with Russia.

Other participants from China added to this. One noted the similarity of China's current stance to the ambiguous response it had (towards the US) during the wars in Iraq. Another commenter noted that China opposes the invasion, though its method of opposition is simply different to that of the countries of the West. Still another panelist noted that Japan's response to the 2014 annexation of Crimea seemed to be more in tune with Russia than the US, and that Japanese companies have still not withdrawn from the Sakhalin-II project.

The response from the Japanese side highlighted the significance of China not criticizing Russia even though it is in violation of the principles of the UN Charter (especially considering China's insistence on adhering to the Charter in various other areas.) Another participant pointed out that China's own goal of achieving a "community of common destiny for mankind" requires that countries must not violate the sovereignty or territoriality of other countries, and urged China to draw a clear line with respect to Russia.

There were more hopeful overtures as well. It was noted that China is being affected by the same energy and food supply issues as Japan, and both countries share the same awareness of the need to prevent war and promote post-war reconstruction. Through issues such as these, Japan and China can find many areas in which they can cooperate. To support this point, Kudo referred to the results of the opinion survey conducted in 55 democracies worldwide, which revealed that the people of Ukraine have extremely high hopes for their country's future relationship with China. Kudo stated his belief that China should take a stronger stance against Russia's aggressive behavior.

The next session dealt with how to manage contingencies and disputes over Taiwan.

Retired Major General Yao Yunzhu argued that the US is using the Taiwan issue as a weapon against China. She wondered why the US seems to be attempting to alter the One China principle, and why Japan seems to be following suit.

Zhang Tuosheng warned that if the US affirms the increasing movement towards independence on the part of Taiwanese President Tsai Ing-wen and her administration, it will bring about a full-scale crisis in the Taiwan Strait. In order to avoid such an event, he recommended that both the US and China should do their utmost to avoid crossing into the point of no return. Zhang pointed out the necessity of improving communications between political and military leaders, and appealed to Japan and the US to adhere to and support the One China principle. He offered some advice particular to Japan as well, suggesting that it avoid engaging in the same sort of discourse shown by former Prime Minister Shinzo Abe, who equated a contingency for Taiwan with a contingency for Japan and for the US-Japan alliance.

Zhang added that the Chinese government is unable to commit to not using force in response to any moves towards independence on the part of Taiwan.

Retired Japanese Maritime Self Defense Force Vice Admiral Yoji Koda took the podium to offer the Japanese perspective, and while he expressed his hopes for the continued free and democratic society established by the people of Taiwan, he doesn't believe that the country is currently aiming for independence. However, he also indicated that both Japan and the US are worried that China will ignore the current situation in Taiwan and react to any discovery of even the smallest of moves towards independence with a forced reunification using military force. He looks to China for more clarity regarding how it aims to achieve peaceful reunification.

Akio Takahara offered the opinion that China's perspective of the world is becoming more like that of Russia. With the current conflict between the US and China, he believes that China is looking at the world through a lens defined by its strategic competition with the US. He suggested that China's this bias is why it thinks that Japan is always in lockstep with the US.

Responding to the issues Takahara raised, one participant from China suggested that the immense pressure exerted by the United States makes it difficult to look at the world using anything but the US as the standard. However, it was also noted that China has benefited from the current world order, which sets it apart from Russia.

The Japanese side responded to the discussion of the One China principle by stating that the Japan-China joint statement asserts that Japan "understands and respects" the principle itself, but that it doesn't necessarily agree completely with the Chinese interpretation of it. The Chinese side replied with a request that Japan acknowledge the Chinese interpretation, in accordance with the Cairo Declaration requiring the return of Taiwan and with Article 8 of the Potsdam declaration, which required that the terms of the Cairo Declaration be fulfilled.

In the third and final session, it was suggested by the Chinese side that the current relationship between China and Japan is "on thin ice," though Japanese participants believed that the two countries stand at a turning point. With the two countries now approaching the 50th anniversary of the normalization of relations, discussions delved into past efforts to improve the bilateral relationship, and concrete efforts that could be undertaken to achieve that purpose.