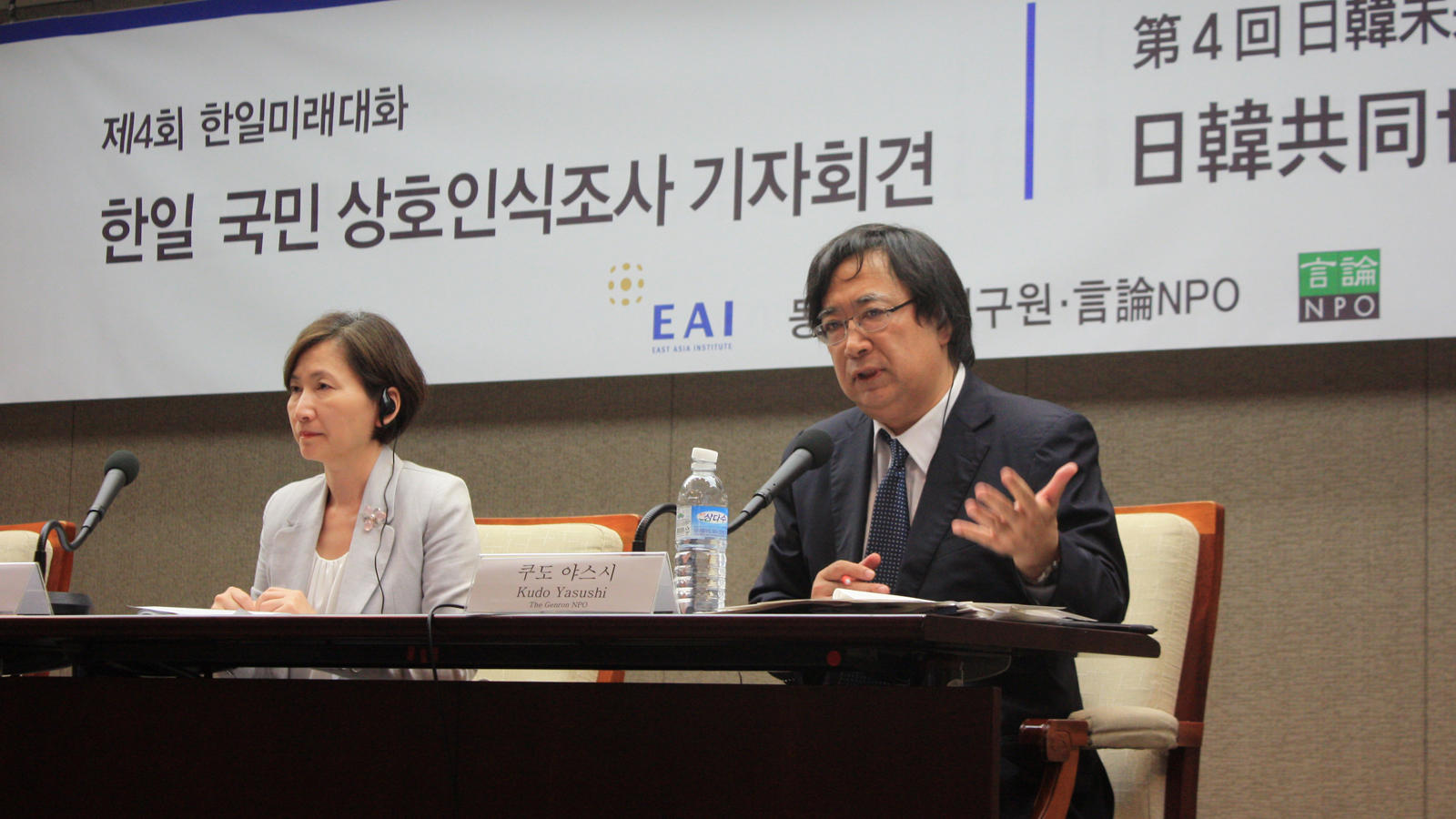 By Yasushi Kudo
President of The Genron NPO

Recent joint annual public opinion polls in Japan and South Korea show a halt to years of worsening feelings toward each other's country, but both countries' peoples are not totally confident that bilateral relations will continue to improve.

The public opinion surveys have been conducted by The Genron NPO, the not-for-profit, independent Japanese think tank, and its South Korean counterpart, the East Asia Institute (EAI), since 2013. The latest polls, the fourth, were carried out from the middle of June to early July.

The foremost finding in the latest surveys was that people's unfavorable feelings toward each other's country have begun to improve. The improvement was seen in almost all questions, but differences did exist in the views of Japanese and South Koreans about China's increasing international political clout and national security issues for both countries.

Their mixed views can be taken to indicate that many people in the two countries are uncertain about the direction of bilateral relations in the years ahead.

The survey in Japan covered 1,000 samples selected from among men and women aged 18 or older, while the survey in South Korea covered 1,010 samples, aged 19 or older. The findings will be reported at the fourth session of the Japan-South Korea Future Dialogue in Seoul on Sept. 2.

According to the latest findings, 44.6 percent of the Japanese polled replied that their impressions of South Korea are unfavorable or relatively unfavorable, but the figure improved from 52.4 percent for the previous year. A comparable figure for South Korean respondents was as high as 61.0 percent, but this represented a sizable improvement from 72.5 percent a year earlier.

【Figure 1 Impression of One Another's Countries】

Reflection of hopes for better ties

For a more precise understanding of the results, why the mutual feelings toward each other's country improved this time and whether the improvement is a "genuine one" must be analyzed. The generally unfavorable results in the previous surveys can be attributed to insufficient people-to-people exchanges between the two countries and a consequent dependence by ordinary people on indirect information obtained from media reports, particularly TV news, to form their views on each other's country. A similar pattern is seen in the opinion surveys carried out by The Genron NPO and its Chinese counterpart in the past 10 years.

Looking back at journalistically important incidents between the two countries last year, the foreign ministers of Japan and South Korea met six times in 2015 as the year saw the 50th anniversary of the normalization of their diplomatic relations. A bilateral leaders' meeting took place in November for the first time under Prime Minister Shinzo Abe's current administration, inaugurated in December 2012, on the sidelines of a tripartite summit of Japan, China and South Korea. But the developments came only after the opinion surveys by The Genron NPO and the EAI last year.

Toward the end of the year, the two countries' governments also reached a landmark agreement on the issue of Korean "comfort women," said to have been forced to provide sex to Japanese Imperial Army soldiers in the wartime years. Further, the two countries' leaders held telephone conferences three times from late 2015 to early this year.

The number of South Koreans who visited Japan in 2015 grew 1.25 million from the previous year. The number of Japanese visitors to South Korea continued to decline from 2012, but the overall moves in the exchange of visits between the two countries are believed to have contributed to the better results in the latest surveys. According to the poll in South Korea, 29.4 percent of the respondents had visited Japan, an increase from 26 percent for 2015.

The series of generally favorable findings in this year's surveys may be a reflection of hopes for better relations between the two countries, but the latest results should be taken as a correction of excessively bad feelings toward each other's country as indicated in the previous polls. The findings in most questions fell short of showing greatly improving mutual understanding and public views on each other's country.

Lack of confidence about future relations

The latest surveys revealed a lack of confidence about the future of relations between the two countries on both sides. The percentage of those who foresaw better relations in the years ahead was only about 20 percent among the respondents on both sides. "There will be no change" was the most frequently selected answer. Of the Japanese polled, 49 percent replied in this way, up from 41.4 percent a year before, while 52.1 percent of South Korean respondents foresaw no change, up from 45.9 percent for 2015.

When asked about views toward the United States, many people in Japan believe that Japan and the United States are allies, upholding freedom and democracy as common values. In the meantime, South Korean people still tend to give more importance to relations with China. Such a tendency was less visible than ever this time, though.

The percentage of those who see Japan-South Korea relations as important remained high on both sides. On the Japanese side, 62.7 percent of the polled replied that relations between the two countries are important or relatively important, compared to the year-before result of 65.3 percent. A comparable figure on the South Korean side was 86.9 percent as against 87.4 percent a year before.

To a different question about the importance of relations with China, 45.6 percent of the Japanese replied that relations with South Korea and those with China are equally important. A comparable figure on the South Korean side was 56.8 percent. This was the most frequently cited answer on both sides.

The South Korean government's decision to join the Chinese-initiated Asian Infrastructure Investment Bank, despite Washington's request for its non-participation, was supported by 64.8 percent of South Koreans polled.

【Figure 2 Affinity Toward One Another's Countries and Toward China】

Differences in views about security issues

The gaps in Japanese and South Korean people's views on China are behind differences in their views about national security issues. For instance, 51.9 percent of the Japanese polled saw the presence of U.S. military bases in Japan as contributing to Japan's defense, but 35.5 percent of them also linked the U.S. military presence to the maintenance of peace in East Asia as a whole and another 29.3 percent referred to the importance of containing China's attempts to increase its influence in the region.

Meanwhile, 50.8 percent of the South Koreans polled replied the presence of U.S. military bases in South Korea contributes to the country's defense, but only 16.9 percent of them linked the U.S. military presence to attempts to check China's influence. About 80 percent of the polled on both sides replied that they feel North Korea poses a military threat. Of the Japanese polled, 72.8 percent also saw China as a military threat, far surpassing the 64.3 percent for the previous year. The agreement struck by the Japanese and South Korean governments in December 2015 about the fate of Korean "comfort women" drew mixed views from South Korean respondents. Of the South Koreans polled, 37.6 percent were dissatisfied with the agreement, while 28.1 percent welcomed the decision.

Lack of confidence among the two countries' peoples about the future of relations between Japan and South Korea, as indicated in the latest surveys, can be attributed to such a long barren period in future-oriented discussions between the two countries. The situation has been complicated by China's increasing clout in the region. A future vision will not be drawn for Japan-South Korea relations and Northeast Asia without efforts to make up for the time lost. Leading private-sector figures, like us, have to strive to improve the situation by reactivating future-oriented dialogues between Japan and South Korea.