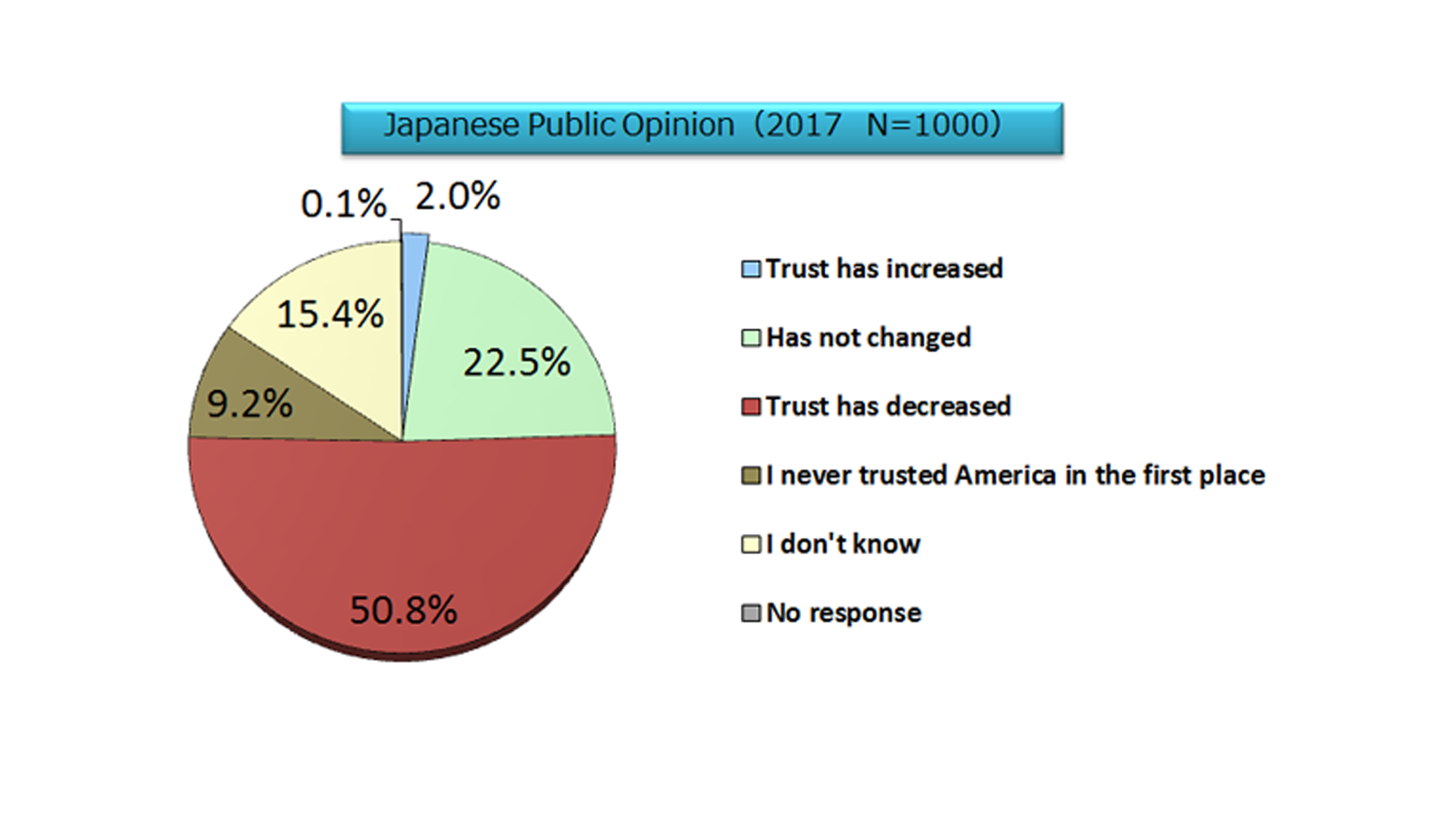 - How do Japanese people view the Trump administration's half year? Japanese Public Opinion on
US Leadership and the Role of Japan

Half of Japanese have declining trust in the United States

We looked at the words and actions of President Trump this past half year and asked if and how trust in the alliance with the United States had changed. The most frequent response by over half, at 50.8%, was that their "trust decreased". Only 22.5% responded that there has been "no change" in their trust of the United States. 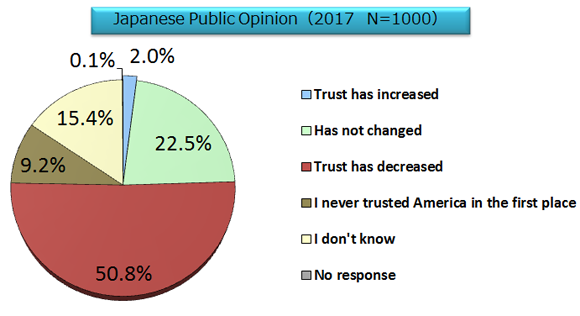 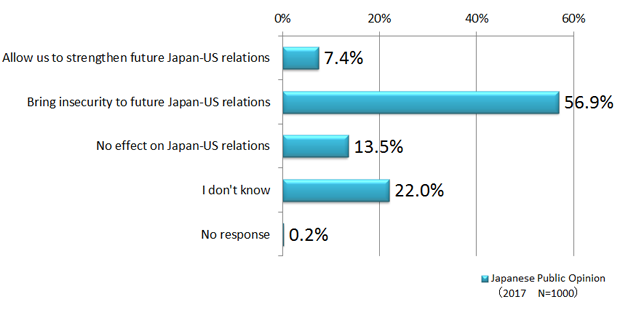 44.1% thought that the Trump administration could destroy the American-led international order. A smaller share of 14.4% thought that Trump would "weaken American influence", while nearly 60% worried about the United States' declining influence in the international community.

Meanwhile more than a fifth of respondents (24.3%) again said they "don't know" or have not yet decided how the Trump administration will change the influence of America on the world stage. As can be seen, many respondents were undecided. 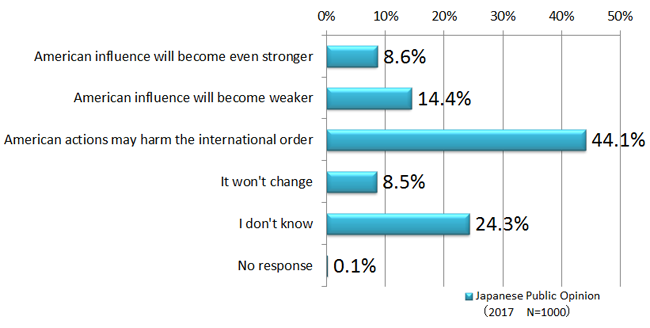 For the other 7 criteria, majority responded that they had few to no expectations for American leadership, especially on "correcting international inequality" (75.3%) and "combating global climate change" (73.5%). 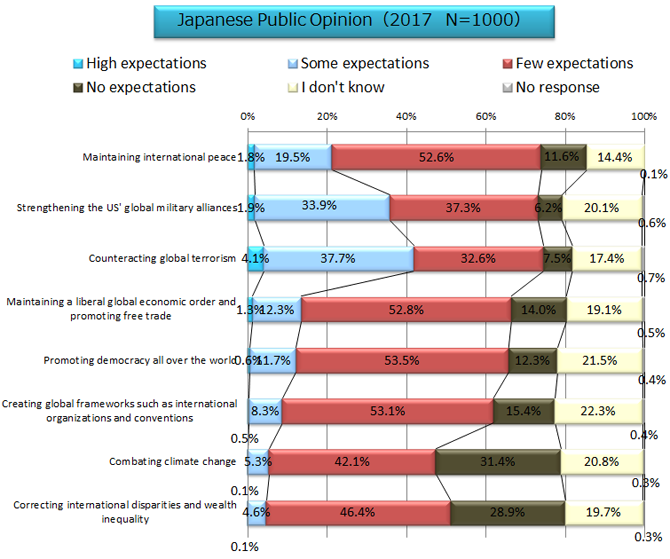 More than half doubt the future of Japan-US relations

Admittedly choosing from only four options, but 41.3% of respondents said that the Japan-US relationship is important, but it is dangerous to focus on only US relations.

In addition, 10.3% of respondents thought that "American behavior is problematic and I think we should proceed with caution". While over half the Japanese surveyed said attention should be paid to Japan-US relations, only 30% placed importance on the development of Japan-US relations in the future. 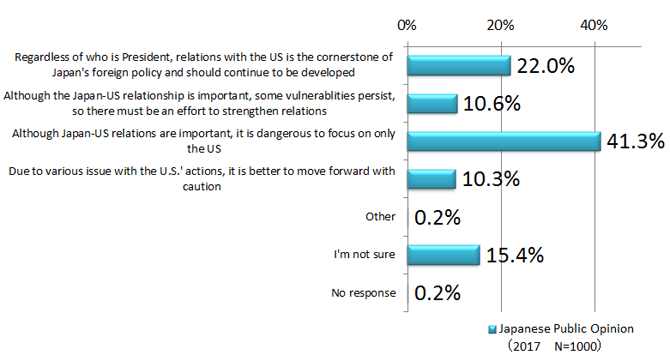 The Abe administration's foreign policy - over half respondents undecided

The Abe administration's diplomacy has emphasized the importance of the Japan-US relationship and actively responded to issues around the world. The response to this diplomacy was more positive than negative, with 25.4% saying they "approve" against 16.2% who "disapprove".

That being said, when considering the number of "neither approve nor disapprove" (39.7%) and "not sure" (18.5%) responses, well over half in fact refrained from making any judgement. 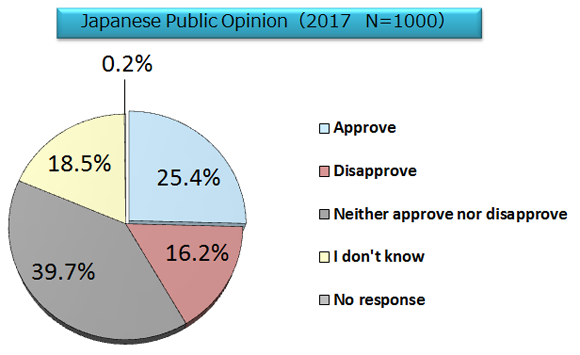 Rather than just depends on America, there is growing support for Japan taking on a more active role and leadership in the international community based on the principles of multilateralism and freedom.

The biggest response is a wake-up call to those pushing for Japan to follow America's leadership closely, as 38.1% said that "Japan should not stick to the US alliance, but rather consider normalization and cooperation with other major powers, including China".

Meanwhile 30% of respondents said that "amidst this situation of instability in the international order, Japan should take on a leadership role to develop the norms and mechanisms that have supported the post-WW2 world such as international cooperation based on freedom and multilateralism".

Developing that reply, 17% responded that "under this unstable international order, Japan should observe the norms that led the post-WW2 world, including international cooperation based on freedom, democracy, multilateralism, and demonstrate leadership among advanced democracies". In addition, 9.7% responded that "under this circumstance, Japan should strengthen their relations with developed democracies other than America and demonstrate joint leadership under a multilateral framework.

Meanwhile only 12.3% of respondents thought that Japan should "strengthen international cooperation with the United States, and develop international leadership between the two countries with America as the center". 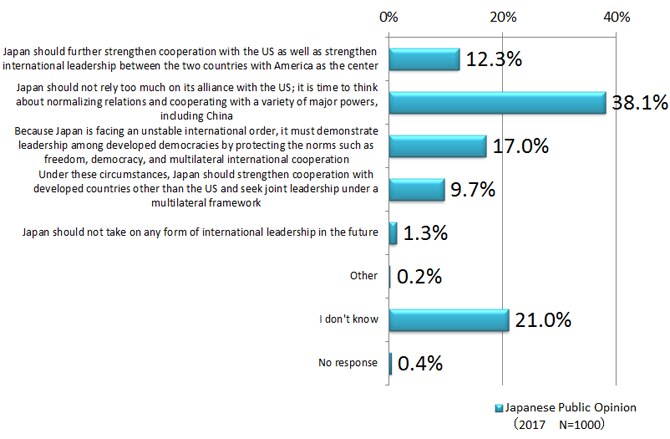