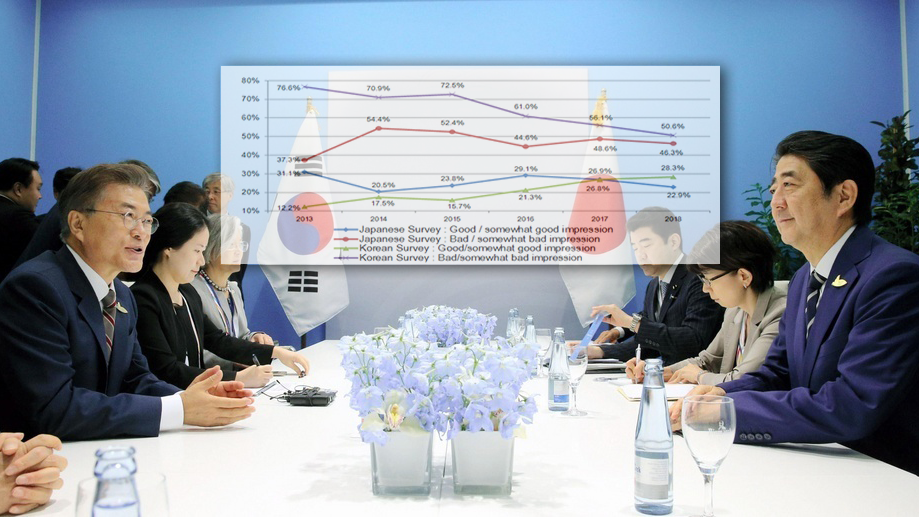 There is a large discrepancy of public opinion between Japan and South Korea concerning the resolution of the North Korean nuclear issue and the future of the Korean Peninsula.

The resolution of the North Korean nuclear issue

South Koreans are optimistic, in contrast with the Japanese who are cautious about the progress of denuclearization. 60% of South Koreans believe that the North Korean nuclear issue will be resolved within the next ten years, whereas over 60% of Japanese believe it is difficult to reach any solution.

The Korean peninsula in 10 years

70% of Japanese answered either "instability will remain the same" or "do not know", whereas 60% of Koreans answered "relations between North and South will improve". Still, Japanese and Koreans who believe the two Koreas will "move forward to reunification is only 10 percent.

Over 50% of South Koreans believe that there should be "complete unification as a single country", or "two separate states under a sovereign federal government". More than 20% wish for a "North-South union similar to the EU". On the other hand, "do not know" was the most common answer for the Japanese, more than 50% of Japanese do not imagine a large change
on the peninsula.

Half of Koreans and more than 40% of Japanese feel that it is necessary even after the peaceful reunification of the Korean peninsula, but in Korea, more then 40% also answered "unnecessary", indicating a division of opinion.

The impression of Japan among Koreans continues to improve, yet there is no significant improvement among the Japanese. AS for the bilateral relationship,the number of people who feel current Japan-South Korea relations are "bad" has decreased. However, this did not translate into improvements in the perception of relations as "good," as nationals of both countries who answered positively remain below 10%.

Resolution of the comfort women issue

While 30% of Japanese believe the issue should be solved by South Korea accepting the 2015 agreement as the final resolution, there is also a similar number that believe some kind of additional measure is necessary. In ROK, nearly half of the answers expressed that "more discussion" is needed, and 40% reply "acknowledged the existing agreement but implementing complementary measures. This indicates that 90% in total view a new measures is necessary.

The Genron NPO conducted the Japanese portion of the survey between May
and June 3 this year targeting men and women across the country over the age
of 18. Questionnaires were delivered to participants and self-administered,
resulting in a collection of 1,000 valid samples.

The opinion poll in South Korea was conducted by the East Asia Institute
between May 21st and 31st by face-to-face interview method, targeting men
and women aged 19 and over. The number of total valid responses was 1,014.

If there are any questions, please contact The Genron NPO Secretariat
at 03-6262-8772 / info@genron-npo.net