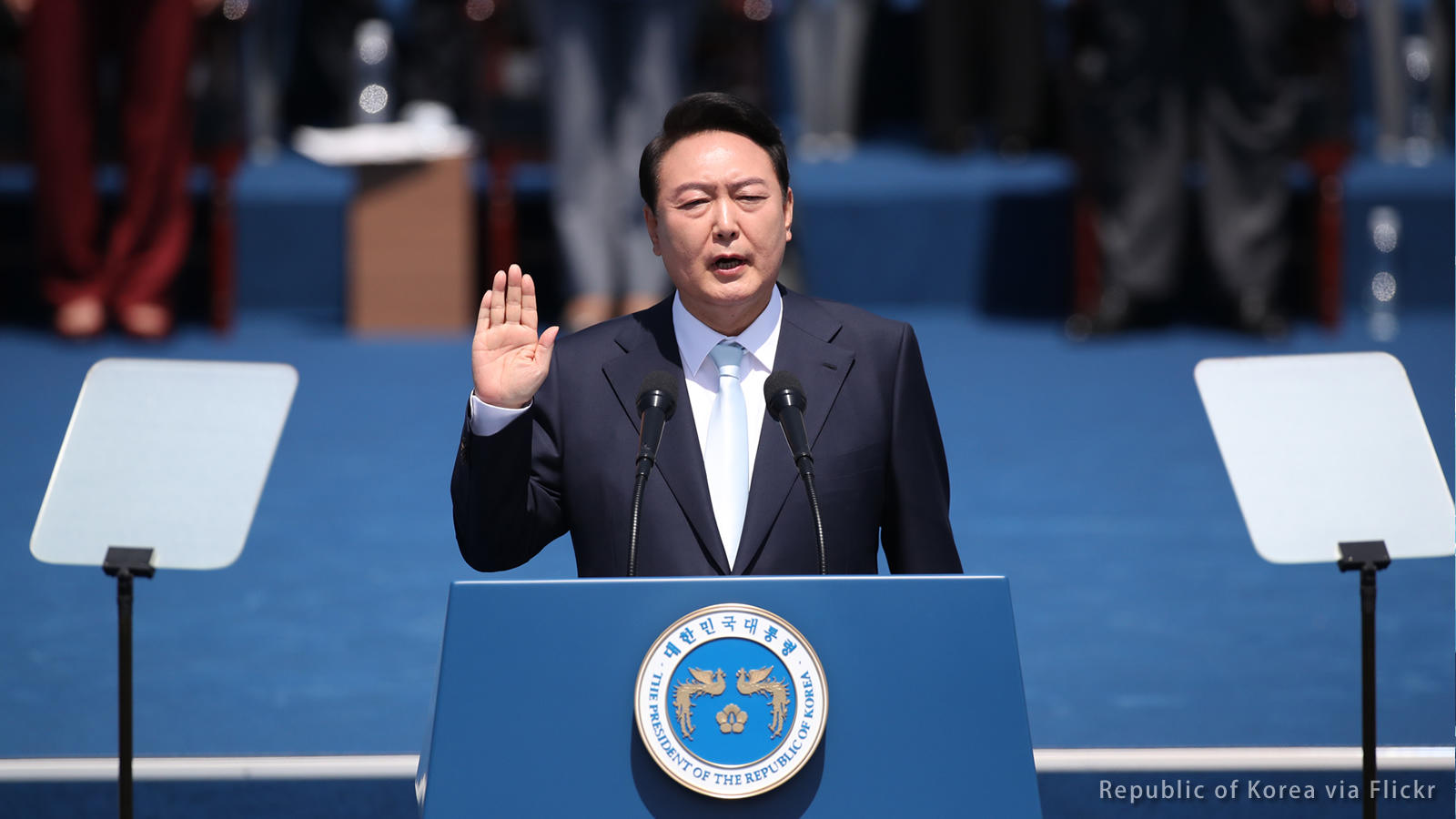 Will improved public sentiment in Japan and South Korea lead to better relations between the two countries?

This year's public opinion surveys showed that sentiment in Japan and South Korea regarding the other country has finally begun to improve after years of being in what has been called the worst state since the end of the Second World War.

The change was abrupt with the number of South Koreans describing their opinion of Japan as "bad impression" dropping by 10.4 points and the number of Japanese respondents describing their opinion of South Korea as "bad impression" dropping by 8.5 points.
This is the largest improvement in opinion seen in the survey in the ten years since it was launched in 2013.

This trend can also be seen in public opinion of the current relationship between the countries. Those calling the relationship poor dropped by 16.4 points in South Korea and 12.9 points in Japan.

The improvement seen in South Korea in this survey was particularly strong.

One reason for this is the increased wariness on the part of South Koreans towards China with the increased tensions between China and the US. With that development, South Koreans have begun to take a perspective that matches that of Japan, another US ally.

However, the governments of the two countries have not yet made any effort to improve the relationship. This can be seen not only in the low numbers of people in both countries calling the relationship "good," but also in their low expectations for the future relationship between the countries.

This year's survey was conducted as a new administration took the helm in South Korea - an administration that is showing a desire to improve relations with Japan - and as the Kishida administration looks for opportunities to improve the relationship as well. However, it is also clear that neither leader has yet to meet the expectations of their respective populace.

However, only 1% of people in each country were able to visit the other country due to COVID-19 concerns, meaning that interaction has essentially come to a halt, and this lack of interaction was reflected in the surveys.

The recent relationship between Japan and South Korea has been described to be at its lowest point since the end of the Second World War. This began with the South Korean decision ordering compensation for former forced laborers and the 2018 radar-locking of a Japanese aircraft by the South Korean navy, and progressed to the imposing of substantial export restrictions by Japan and the subsequent economic retaliation by South Korea. And yet, no intergovernmental efforts to improve the situation have begun in the last year. Discussions are at a standstill.

Nevertheless, there are strong hopes for a mutual improvement in public opinion among both Japanese and South Korean citizens. This cannot be explained solely by the inauguration of a new administration in South Korea which has shown desire for improved relations, nor by the new Japanese prime minister taking his post.

What may lie behind this is increased awareness of the potential threat of China's actions as the two countries strengthen ties with the US while it deals with its conflict with China. That seems to have triggered a change public opinion in both countries. The trend is particularly obvious in South Korea.

Amending the rapidly expanding "bad" impressions in both countries

First, let us look at the impressions each country has of the other, and at people's opinions about the bilateral relationship. The last ten years of surveys can clearly show us where trends are accelerating.

South Koreans holding a "bad" impression of Japan has improved by 10.4 points from the last year, dropping from 63.2% to 52.8%, and Japanese respondents showed a similar trend. This is the biggest improvement in the metric in either country since the survey began.

The percentage of Japanese people holding a good impression of South Korea rose 5 points to 30.4% since last year, and South Korean sentiment regarding Japan showed a marked improvement as well, rising 10.1% to 30.6% over the last year.

Impressions of other country (past ten years)

These trends are also reflected in people's opinions of the relationship between the countries.

The percentage of South Korean respondents describing the current relationship as "bad" dropped to 64.6% from 81% last year, a major decrease of 16.4 points, while the Japanese percentage with the same opinion reached 39.8%, a 12.9 point drop over last year's 52.7%.

However, this sentiment regarding the current relationship should be considered an evaluation of expected improvement as neither government has made any real move to do anything concrete.

That is reflected in other metrics. While the number of respondents called the relationship "bad" decreased, the number calling it "good" remained low at 13.7% in Japan and 4.9% in South Korea.

Citizens in both countries press their governments to improve relations

In this context, we asked respondents their impressions of the two new leaders and of the current state of efforts to improve the relationship between the two countries, but citizens in both countries were critical of their governments' responses.

In comparison, almost half of Japanese respondents at 49.8% answered "Don't know" or "Neither" (good nor bad) regarding President Yoon, who is calling for better Japan-Korea relations.

Therefore, this suggests that the public remains critical of the measures being taken by both the Japanese and South Korean governments.

Only 12.2% of Japanese people approve of the South Korean government's policies towards Japan, with more than half (51.9%) answering "Neither" (good nor bad) and "Don't know," and 35.6% expressing disapproval.

In South Korea, 43.2% of respondents disapprove of Japanese government policies towards South Korea, and added to the 42.8% who answered "Neither" (good nor bad" and "Don't know," we find that more than 80% of South Koreans express some level of disapproval of Japan's foreign policy toward South Korea. Only 14.1% of respondents had a positive impression.

We see that the public is pushing their governments for a response, with 53.4% of Japanese believing that the relationship should be improved, up from 46.7% last year, and 81.1% of South Koreans believing the same, up from 71.1% last year.

Let us now explore why public sentiment towards the other country is improving in both Japan and South Korea.

Fundamentally speaking, citizens in both countries have begun to realize over the last year just how important the other country is.

This is particularly true in South Korea, where there is a growing appreciation of the potential threat posed by China arising from its deepening conflict with the US, and from China's assertive actions in Asia.

The issues of "democracy" and "alliance with the US" have not appeared often in past nine-year survey, but these two issues are now rising as drivers of public sentiment in both countries.

The percentage of South Koreans who consider the Japan-Korea relationship important has risen from 79.1% last year to 82.6% this year. Japanese respondents with the same opinion are at only 56.5%, but this is a 9.9-point increase over last year's 46.6%.

Behind this improvement is increased consciousness of the fact that both Japan and South Korea are democracies, and both are allies of the US.

When asked why the Japan-Korea relationship is important, 19.6% of South Koreans cited "democracy and other common foundations" 4.6% more than last year, and 23.6% (a 6.1-point increase) cited "common security interests as US allies."

In Japan, nearly half (49.3%) of respondents chose one of these two items, with each increasing over last year's figures.

Public sentiment still colored by underlying conflict between the countries

In conclusion, while some improvements have been made, it should be noted that this year's survey shows that many of the underlying conflicts that have historically stood as obstacles to the Japan-Korea relationship have seen no improvement whatsoever, and they have strong hold on the public consciousness.

For example, we see an increase in demand for the South Korean Supreme Court decision on compensation to forced laborers to be executed as ruled. This issue had the highest number of respondents in South Korea at 36.5%, an increase from 32.6% last year. Japanese respondents were most likely to select this issue as well but with the opposite conclusion, with 30.6% believing that the Japanese government should not uphold the ruling.

In addition, regarding the mutual export restrictions in place since July 2019, 35.9% of Japanese responded the restrictions should be stopped either immediately or in stages, while a majority of South Koreans at 42.9% still support their government's actions in response to Japan.

One reason this confrontational structure exists in the public consciousness because neither government has addressed the conflict in any way, but another factor is that direct interaction between the people of these two countries, which also helps alleviate conflicts like this, came to a complete halt, partially due to the COVID-19 pandemic.

People in both countries have strong hopes for a better Japan-Korea relationship, but they have no ideas about how to alleviate the conflict or about what actions their new governments should take.

Underlying this transformation in public consciousness are the US-China conflict and the rising tensions surrounding the actions of China and North Korea, and these have only just begun to reduce the distance between the peoples of Japan and South Korea.

How to address forced labor issues

How will the governments of Japan and South Korea respond to the increased expectations of their peoples for better relations? What sort of mutual future will they aim for? Without a response to these questions, the Japan-Korea relationship will see no more real improvement.

Among South Korean respondents, 88.2% believe that Japan and South Korea already stand on equal terms or are moving in that direction, and 60% are optimistic about the future of South Korea.

However, fewer Japanese respondents believe the two countries are now on equal footing, and Japanese people are less confident about Japan's future. How will these two different countries come up with a vision for the future, and how will they build a more cooperation relationship in this region?

People in both countries await the answers to these questions.