Following the preparatory talks for the 10th Tokyo-Beijing Forum on June 8, the Japanese delegation headed by Yasushi Akashi, chairman of the Executive Committee of the Tokyo-Beijing Forum, paid a courtesy call on a number of Chinese leaders to seek their cooperation in working for the success of the Forum.

The 10th Tokyo-Beijing Forum is to be held in Tokyo in late September prior to the Asia-Pacific Economic Cooperation forum summit slated for November in Beijing.

The following day, the delegation visited Fu Ying, chairwoman of the Foreign Affairs Committee of the National People's Congress. Fu had served as a staff member of the United Nations Transitional Authority in Cambodia in 1992-1993. Genron NPO Advisory Board member Yasushi Akashi headed the U.N. mission. 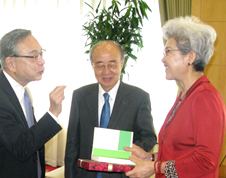 Akashi, former U.N. Undersecretary General, who is currently chairman of the International House of Japan, told Fu that the Tokyo-Beijing Forum is becoming an important venue for the improvement of Japan-China relations and sought her cooperation. The Genron NPO President Kudo handed Fu a copy of his newly published book titled "Genron Diplomacy." In his talks with Fu, Yasushi Kudo, president of The Genron NPO, emphasized the importance of creating coolheaded public opinion in Japan and China toward each other's country while explaining The Genron NPO's activities toward that end. Fu expressed her concerns about the worsening bilateral relations, and expressed her understanding of the Forum's significance and support for The Genron NPO's diplomatic initiatives.

Later in the day, the delegation paid a courtesy call on Vice Minister Chen Fengxiang of the International Department of the Communist Party of China's Central Committee. In their talks, Chen sought the Japanese visitors' opinions on his department's activities to promote exchanges between the political parties of the two countries. Kudo told Chen that the exchange programs should become the venue for serious dialogue for the solution of challenges facing the two countries, not just for the development of friendly relations. Chen basically agreed with Kudo's comments.

On June 10, the final day of its stay in Beijing, the delegation visited Chen Haosu, former chairman of the Chinese People's Association for Friendship with Foreign Countries, who was one of the founders of the Tokyo-Beijing Forum. Kudo told Chen that the 10th annual workshop, due to be held in Tokyo prior to the APEC summit slated for November in Beijing, is going to play an important role in improving the governmental relations between the two countries and in galvanizing the public opinion of both countries toward bilateral reconciliation. Chen voiced support for Kudo's opinion, saying that opinion leaders and intellectuals of both countries should continue to raise their voices in pursuit of the betterment of bilateral relations in a levelheaded manner.