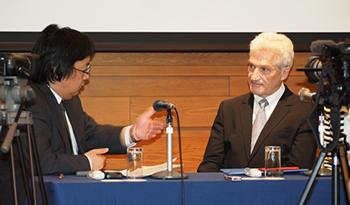 Japan's reconciliation efforts over its wartime acts in Asia should focus on increasing the trustworthiness of its words of apology to the affected countries, notably China and South Korea, according to a veteran German diplomat.

A reconciliation process must be started just after the cessation of hostilities and if it is done then, relations with affected people and countries can begin to improve immediately, said Volker Stanzel, former German ambassador to Japan.

Japan would have been on better terms with China and South Korea than it is now, if it had moved for reconciliation with these countries just after the war's end, as it did with the United States, but because a long period has lapsed, the relationship cannot be improved in such a manner, he said.

The situation has become more complex because efforts to overcome the wartime history and realize better relations with the affected countries are linked to new political issues, such as China's moves to be a major power, he said.

In a recent interview with Genron NPO President Yasushi Kudo, Stanzel recalled that Germany's reconciliation with Poland became possible by resolving political issues, particularly the confirmation of a border line between the two countries, on top of moral problems over wartime incidents.

As far as South Korea is concerned, Japan must grapple with such political issues as how to maintain cooperative relations with its geographically closest neighbor, said Stanzel, who served as ambassador to Japan from December 2009 to September 2013.

In Japan, many influential figures speak about its wartime history in terms that apparently cast doubt about its war responsibility, and these remarks become an obstacle to solving political issues with the countries concerned, he said.

Over the past decades, Japanese politicians, and even the Emperor as Japan's symbol, have expressed words of apology over Japan's wartime history many times, and there should be no need for stronger apologies from Japan, Stanzel said.

Japan should strive to make its apologies more trustworthy to the countries concerned, rather than simply repeating what it has said in the past, Stanzel said. Japan should try to persuade the neighboring countries concerned that the Japanese people as a whole are fully aware of Japan's war responsibility, he said.

Japan should be careful not to make people in the countries concerned think that it has not truly accepted its war responsibility, Stanzel said. "This is clearly a moral problem," he said.

Stanzel, who also served as ambassador to China, said Beijing hopes that Japan will be more open-minded toward its increasing presence on the international political scene. But he also admitted that how to deal with China's moves to be a central player in the world is a difficult political issue for Japan. Japan is expected to have far more difficulties in improving its relations with China, compared to relations with South Korea, he said.

Relations between Japan and South Korea have been rather shaky in recent years, but the two countries have interests that can be mutually shared, the ambassador said. If Japan and South Korea pursue their common interests in Asia and in the world, then it will be easy for the two countries to overcome political obstacles to better relations, Stanzel said.

Japan should make its words of apology even clearer to South Korea and at the same time, the two countries should pursue common objectives as international players living side by side, he said.

If private-sector organizations, such as The Genron NPO, are fully involved in efforts to remove obstacles to mending relations between Japan and South Korea, they will be able to play a very powerful role toward reconciliation, he said.

Because South Korea is a democracy with a strong civil society, there can be discussions between Japan and South Korea about war-related moral problems, and new political issues, Stanzel said. "But this may be difficult with regard to China" because the country tends to abuse the war-linked moral problems as a political tool, he said.

A civil society-based approach in China is far weaker than in South Korea, Stanzel said. Civil society-related factors should be strengthened with an eye to the future for China, too, he said. In that event, the war-related issues keeping Japan and China apart may also be resolved, he added.