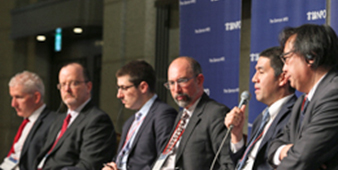 Leading journalists from the U.S., the U.K. and Canada joined Japanese researchers and experts in Tokyo on March 16 for an event hosted by The Genron NPO to discuss the implications of the ongoing U.S. presidential election and the security issue in Northeast Asia. It was the first in a series of "World Agenda" events that The Genron NPO plans to hold to discuss international issues.

The first session, titled "The U.S. Presidential Election and the Future of Asia" focused less on the election as a whole and more on the emergence of Donald Trump as a front-runner for the Republican Party nomination.

The panelists for the first session were: David Nakamura, a White House correspondent for The Washington Post; David Feith, an editorial page writer for The Wall Street Journal Asia; Oren Dorell, a foreign affairs and breaking news reporter for USA Today; Michael Den Tandt, a national columnist with Postmedia News; David Munk, an international news editor (Asia Pacific) of The Guardian; Glen S. Fukushima, a Senior Fellow at the Center for American Progress and former Deputy Assistant U.S. Trade Representative for Japan and China; Yasushi Watanabe, a professor at the Shonan Fujisawa Campus, Keio University, and Seiichi Kondo, president of the Kondo Research Institute of Cultural and Foreign Affairs and former Commissioner of the Agency for Cultural Affairs.

Hiroki Sugita, Managing Senior Writer for Kyodo News, moderated the first session, and kicked it off with question meant to clarify the situation in the current U.S. election: what is behind so-called "Trump Syndrome"?

David Nakamura responded first from his perspective as a White House correspondent, saying that one issue behind the growth in support for Donald Trump is that while President Barack Obama has noted that the economy is growing and unemployment is falling, "some Americans are feeling that recovery more acutely than others." He pointed out that the income gap is growing, and the middle class may be feeling more insecure about the U.S.' place in the world, both economically and politically.

Oren Dorell added that while the number of jobs is rising, so is the national debt. On top of that, the Republican leadership seems to be out of touch with portions of the electorate. While the GOP is traditionally more socially conservative, many voters now have less interest in hot topics like abortion and marriage equality, and have taken a more libertarian stance that is more interested in freedom and leaders who will "tell the truth." He pointed out that some Trump supporter know that he may be being untruthful about some issues, but while "they don't agree with what he says, at least they know where he stands." A similar phenomenon may be what is behind the popularity of Bernie Sanders as well - people are looking for authentic leaders.

David Feith looked at the election from a more Asia-focused standpoint and pointed out that Trump's focus on Japan seems to be less about actual policy and more a "quirk of Trump." The concerns he raises may be valid, Feith added, but if Trump hadn't put such a focus on it in debates, there may not have been as much discussion of the U.S.-Japan relationship as has been seen so far.

Sugita looked to the two other foreign journalists for a more international perspective on Trump, and Michael Den Tandt pointed out that the Trump phenomenon is one that is not limited to the U.S. and Canadian politics, although on the municipal level, saw a similar level of support for the anti-elitist trend with Toronto Mayor Rob Ford. Although he was notorious for xenophobic and vulgar commentary, "rather than being rejected, his supporters became more enthusiastic." He emphasized that Trump is tapping into that same font of support, and that he should not be underestimated.

David Munk expanded on that point with some comments about the rise of fringe parties in Europe, even in the U.K., where the Labour party has been taken over by a "confirmed socialist." The "traditional elites are being cast away," he said in explanation. "It's shocking to see how far we've come - we're seriously discussing that Trump could be president."

Sugita took that anti-internationalism theme and asked the panelists representing the Japanese point of view to comment.

Glen S. Fukushima mentioned that Trump claims that Japan steals jobs from the U.S., takes advantage of the U.S. based on unfair trade deals, manipulates its currency, and is a free rider on security. If Trump stays in the race after the party conventions in July, Japan will continue to be a subject of election debates. If he drops out, Japan is likely not to be a subject of debates except for perhaps on TPP. Interestingly, "for the first time in over 30 years, Japan's leaders may prefer a Democrat as president to ensure continuity, stability, and predictability."

Seiichi Kondo turned the discussion towards liberal democracy, stating his belief that it is facing threats around the world. The "American Dream" has been proved false, he said, and the people feel marginalized - the ultra-right and ultra-left fringe are rising in Europe. Kondo believes that liberal democracy requires discipline.

"Humans tend to be prejudiced, afraid of foreigners," he said. "When things go well, this is hidden, but when things aren't going well, this comes out. Trump has used this well."

Yasushi Watanabe reiterated that the middle class is shrinking in the developed countries, including the U.S. That "angry middle class" is becoming less generous - a prerequisite of liberal democracy ideals - and more introverted, more isolationist. They are pushing against the establishment, and whether or not Trump wins the upcoming election, a similar candidate may rise again in the future. Increased globalization and increasingly isolationist policies will make it more difficult for the U.S. to fulfill the role of world policeman, and although Japan used to simply sit on the sidelines and "let the US run the show," Watanabe believes that perspective must change.

The second session was moderated by Yasushi Kudo, president of The Genron NPO. The five journalists who participated in the first session were joined by Yuji Miyamoto, chairman of the Miyamoto Institute of Asian Research and former Japanese Ambassador to China, and Masahiro Kawai, a professor at the Graduate School of Public Policy of the University of Tokyo.

Titled, "Peaceful Development in Northeast Asia and the Role of Japan," Kudo directed the discussion toward China's emergence as a world power, asking what should be done if the U.S. stops playing a major role in the region.

Nakamura highlighted President Obama's outreaches to Chinese President Xi Jinping and how they illustrate how the U.S. focus has shifted from the Middle East and Europe towards Asia. However, he also noted that critics of the administration are claiming that Obama is not doing enough; that he "has to assure allies that he is there for them, working to build bridges among them."

Feith stated that the South China Sea question will hinge on new national partnerships. China, according to Feith, is "increasingly posing a challenge to the liberal democratic international order that has prevailed for 70 years." He believes that though the US has up until now assumed that China will one day became a stakeholder in that international order, that assumption is currently the subject of debate in Washington because, as one report put it, "China has shown that they are not interested in being a part of a US-led liberal international order."

Kudo mentioned a questionnaire distributed by The Genron NPO among foreign journalists. One question - "Do you think there will be conflict in Asia?" - saw 46.1 percent of the respondents answer in the affirmative.

When asked their opinions on that result, Den Tandt commented that Japan will need to look into raising defense spending in preparation for the possibility of the US pulling back from Asia, while Munk returned directly to the South China Sea issue, noting that there seemed to be no military reason for the installations being built. They are there "to send a message that China is stronger, but also as a release valve" for issues in domestic China, from the ongoing crackdown on corruption to arrests and human rights.

Kudo asked what sort of message the U.S. would be sending China if it became more introverted.

Yuji Miyamoto answered that he is worried that the current election may be signalling a move away from the clear principles and ideals upon which the international order is built. He asked, "If the US becomes introverted, forgetting those ideals or no longer committing themselves to them, what will happen to Northeast Asia?" He believes that, being the most powerful, China would take control, but added that they haven't set their mind to that task yet. The U.S., in his opinion, needs to reconsider their plans to prevent such an eventuality.

Masahiro Kawai provided the economic perspective, namely that what China is doing in the South China and East China Seas makes little sense. He believes a clear message should be sent to China, but successful resolution of the issues could be achieved through economic partnerships, trade, and welfare assistance - areas where both Japan and the U.S. are well-placed to assist China. Whereas there are few win-win solutions in politics, economics provides many win-win solutions, and also provides the opportunity to focus the discussion away from politics. He noted that, in addition to the Trans-Pacific Partnership (TPP), a trilateral Free Trade Agreement (FTA) between South Korea, China and Japan could help build a foundation for peace in the region.

One consensus reached during the question period was that the ideals of liberal democracy must be defended, and that Japan should play a greater role in the region to that end. At the same time, the journalists from the U.S. agreed that a Trump victory in the presidential election wouldn't be as dangerous as many worry.

Dorell mentioned that the U.S. has powerful institutions in place US "and their job is to protect the system from individuals and vice versa." To a comment from Kudo suggesting that perhaps the trend towards populism should be stopped, Dorell warned that journalists trying to shape the debate would only result in the media being dismissed as partisan and easy to ignore. One part of the ideals of liberal democracy, he said, is the idea of free speech, and the role of the journalist is to help voters make informed decisions.

Communication was a recurring theme throughout the discussions, and it perhaps was best summed up by Michael Den Tandt. He said that one possible solution to the dangers the international order currently faces would be, "for people all over the world who espouse these views to forge alliances...through organizations like The Genron NPO frankly...to create alliances that are cross-cultural and cross-national to defend pluralism, to defend liberal democracy, to defend free trade. Because these ideas have worked."