THE GENRON NPO QUADRUPLE DIALOGUEThe future of Northeast Asia and public opinion
in Japan, the U.S., China and South Korea

The Genron NPO brought together political experts and sursters at the International House of Japan in Tokyo on Nov. 2, 2016. The event featured dialogue and discussion on the future of Northeast Asia based upon data gathered in surveys conducted in four countries: Japan, the United States, China and South Korea.

Yoriko Kawaguchi, a former Japanese foreign minister and currently a professor at Meiji University, opened the event with a brief address that touched upon the goals of The Genron NPO. The Genron NPO aims to supply the general public with the information they need to make informed decisions, which leads to the spread and strengthening of democracy and liberal democratic principles. Kawaguchi noted that this is of particular importance in Asia, as it has the potential to become one of the most politically precarious regions in the world.

Yasushi Kudo, president of The Genron NPO, followed Kawaguchi's introduction with a detailed overview of the results of surveys conducted in China, South Korea and Japan this year. Kudo explained why such surveys are so important - namely, that for The Genron NPO to achieve its goals, "we need to know what the citizens of Northeast Asia know and think."

Kudo touched upon quite a few points, but one similarity he highlighted was the change in perception regarding Chinese influence in Asia. The numbers dropped in the data from all three countries, but there was a particularly drastic drop among Chinese citizens. These numbers came up again later on in the discussion.

Kudo also discussed what respondents are looking for most in terms of the political situation in the region, pointing out the largest response in all countries was "peace." However, while people may hope for peace, the data also suggests that not many people believe peace is possible, with only 14 percent of Japanese and 27.8 percent of Korean respondents believing in the potential for peace. In contrast, 48.7 percent of Chinese respondents believe peace is possible, and Kudo believes there may be some value in determining why that particular difference in opinion exists.

The good news, according to Kudo, is that while questions regarding specific countries showed that trust levels are still low, the data also showed that trust seems to be growing in all countries surveyed. After presenting this and other data, Kudo looked to two other panelists for their interpretation of the results in their own counties.

First to speak was Yul Sohn, dean at Yonsei Graduate School of International Studies and Chair of the Center for Japan Studies at the East Asia Institute in South Korea. He provided a South Korean perspective on the data.

Sohn noted that in almost all conflict-related questions, South Koreans showed more concern than both Japanese and Chinese respondents regarding the potential for conflict in the region. He suggested that perhaps this is because Korea is a smaller country and therefore feels more anxious, but one growing concern is the idea that security may not be guaranteed "under the current framework."

South Koreans are also deeply worried about "increasing inward-looking, protectionist trends" in other countries, Sohn said, as this could lead to economic competition, which many South Koreans are concerned could lead to conflict. This concern is aggravated by the fact that China is a particularly important economic partner to Korea, and with the Chinese economy in trouble and with increased corporate competition, some South Korean sectors (i.e. shipbuilding) are facing unclear futures.

On a more positive note, Yuan stated that while overall perception between the two countries may be perceived as negative, particularly when questioning political factors, young people in China have a good view of Japan and South Korea on a more social level, looking to their neighbors for trends in fashion and entertainment.

Bruce Stokes, director of Global Economic Attitudes at Pew Research Center in the United States, presented the results of a Pew survey conducted in the U.S., Japan, China and South Korea.

The Pew data showed that Japanese respondents maintain a positive opinion of the U.S., though the Japanese public sees the U.S. as playing a less important role than it did ten years ago. In fact, Japanese respondents were more likely than Chinese respondents to say that the U.S. role on world stage has declined. Of particular interest in the Pew data was the finding that while Japanese people still have a negative overall opinion on China, they are "split on embracing or confronting China ... being tough or having a strong economic relationship."

In the U.S., respondents feel that "European ties are more important than Asian ties", but here Stokes returned to Yuan's point about youth opinion, and noted that this result is dominated by the opinion of older generations. Young people actually think Asia is more important. In a similar vein, younger Chinese respondents had a more positive view of the U.S. than older respondents, with the same phenomenon being seen in the U.S. data. Young people seem more open to other countries than older people, though why this is true is unknown, so Stokes stressed that few conclusions can be made as yet.

Kudo looked to Shin Kawashima, a professor at the University of Tokyo's Graduate School of Arts and Sciences, to wrap up the discussion for Session 1. Kawashima mentioned data that showed that the Chinese public is starting to be more worried about domestic issues, and stated that in order to maintain peace in the region, three questions had to be answered: how do we handle short-term territorial issues; how do we build an interconnected region-level system; and how do we improve trust between the countries?

Kudo of The Genron NPO moderated the discussion and began by touching upon the upcoming U.S. election, and how the result could potentially affect peace and order in Asia. Kudo asked Yul Sohn what he sees in Korea's future, and how that will influence Asia as a whole.

Sohn noted that he is not "a Korean politics expert", but mentioned President Park Geun-hye's appointment of a new prime minister as an example of the many new developments arising. The opposition and other parties oppose Park's appointment, and Sohn thinks this is "the beginning of long political turmoil."

The South Korean government will have "a lot of big issues to deal with" before the next scheduled presidential election in December 2017, but Sohn is unsure of what will happen. Structural reform for economically-troubled business sectors is needed, and the South Korean economy is currently struggling. There are both internal and external factors that must be dealt with, and those issues in Korea will influence everything in Asia.

Kudo wondered how the changes in South Korea and the U.S. would affect development in Asia and the goals of Genron NPO, and asked Hitoshi Tanaka for his opinion.

Tanaka described how the framework of the world has "changed immensely since I used to work in foreign affairs, studying the global environment." In recent years, he said, the "major driver was globalization," but people one of the shadows cast by that increased globalization is the growing disparity between the haves and haven-nots. Globalization has helped India and China rise to their current positions on the world stage, and in doing so, has also "invited an anti-globalization movement."

Where international relations were once guided by bureaucrats, technocrats and other elites, Tanaka believes this is no longer true, and he pointed to the recent Brexit vote in the United Kingdom as an example of that change away from "rationality." "There's such a difference between Clinton and Trump," Tanaka continued. "It used to be the elites who drove the national interest, but now it's a populist who's driving it," he warned.
Kudo asked how we build peace in Northeast Asia, and the answer lies here. Things will not change if the people do not understand the issues, but they need enough information to form an opinion."

Kudo next asked Yue Yuan about the drastic drop in numbers among Chinese respondents regarding the expansion of Chinese influence, and Yuan noting that with increased freedom of speech people are more comfortable answering such questions truthfully. He said that in 1995, perhaps 97 percent of respondents would answer that they believe the country is "on the right track" whereas last year, the response was only 72 percent. This, according to Yuan, is a good thing.

Yuan hopes that this information, now freely available online, is leading to more "humble reflecting" among the Chinese public. With rising patriotism and nationalism, the decrease in numbers regarding Chinese influence in Asia could be a good sign, especially for the younger generation. "If the country really wants to play a better role globally," Yuan said, "maybe we shouldn't only do it in the Chinese way." 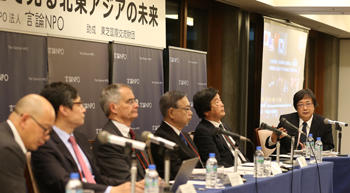 Kudo summarized by stating that the countries seem to want to work together, but they still do not trust each other. He asked, "Where and how should we start, and what should be our goal?"

To this, Tanaka replied that he thinks "governments play a large role in shaping public opinion". He asked why anti-Japanese sentiment in China and anti-Chinese sentiment in Japan are so high?

"If either government were serious about improving the relationship," he said, "they would act. Politicians have to develop a longer-term vision. People's emotions are being placed in front of everything, and I think the governments need to step in."

"We have to have a package approach," he continued. "Something comprehensive. In addition, we must improve the relationship between Japan and China, and to do so, we must build a consensus."

With time running out, Kudo looked to Yuji Miyamoto for some final comments.

"I want Chinese and Japanese people to come to grips with themselves," Miyamoto said. "I support The Genron NPO not because of its work in events such as the Tokyo-Beijing Forum, but because it acts as a pillar for Japanese democracy, reinforcing it. I want The Genron NPO to work harder to form policies."

Miyamoto believes in the necessity of having experts provide the basic ideas upon which policies are built, but stressed that those expert opinions aren't shared among the public.

"We are in the middle of a crisis," he said. "People should be sharing these ideas, and this applies to China as well. We must ask ourselves how we build order and peace in East Asia. We always talk about territorial disputes and historical interpretations, but there's no end to that. We should have a common goal that we explore together. We must ask ourselves the question, 'What kind of East Asia do we want to build?' That's where we should start."

"Peace will not arrive tomorrow," Miyamoto continued. "So we should work together, synchronizing our ideas in order to talk about the distant future."