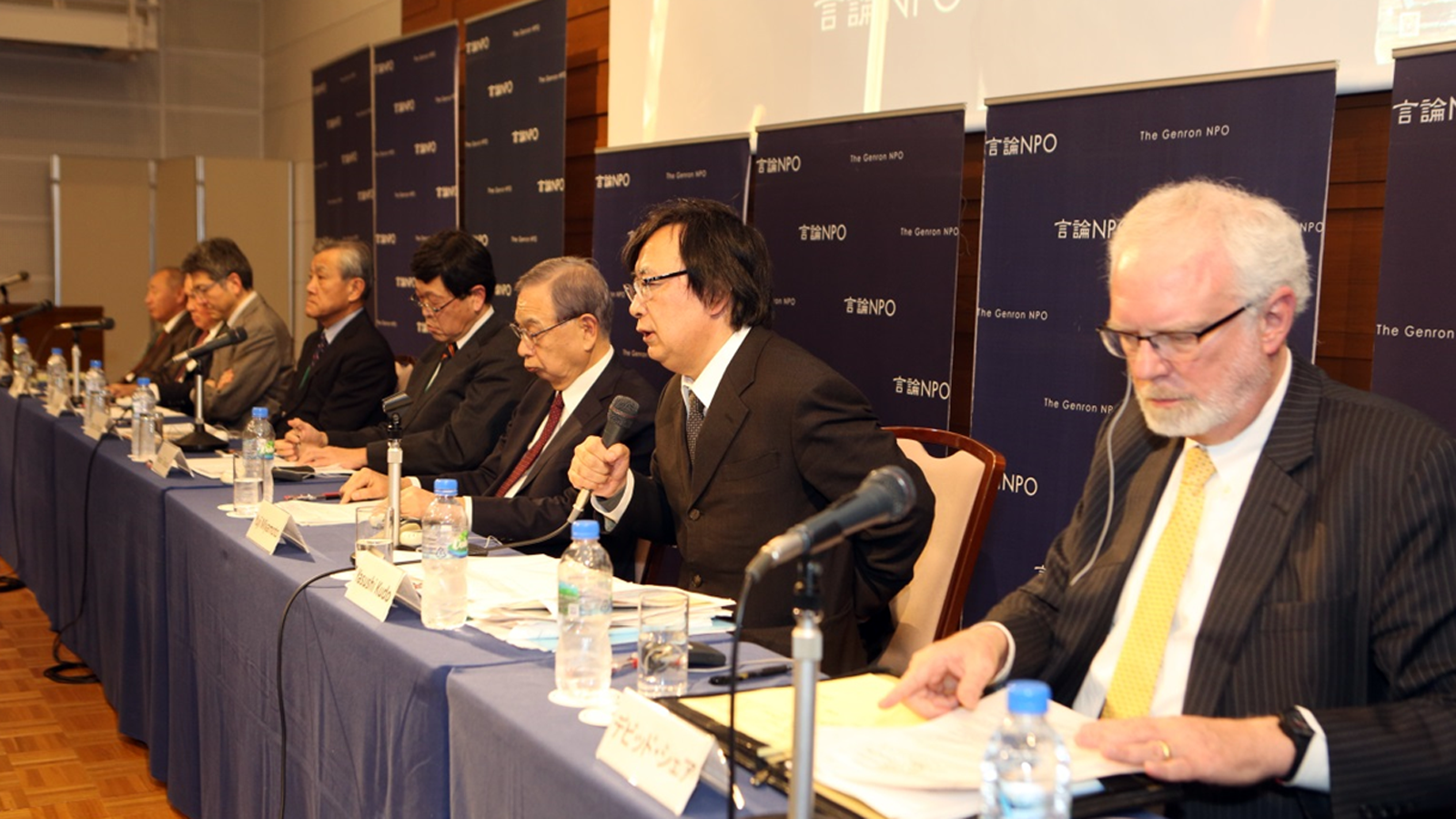 Japan-U.S. Dialogue: Session 2
How Japan and the U.S. can work to realize peace in Northeast Asia

(Article has been translated from Japanese, such that quotes from English speakers have been translated first into Japanese and then back into English. This may result in differences in nuance.)

For Session 2 of the Japan-U.S. Dialogue, panelists discussed how Japan and the U.S. can work together to bring about peace in Northeast Asia.

Yasushi Kudo, President of The Genron NPO, gave an opening statement that pointed out that while Northeast Asia currently seems to be in equilibrium, the region is home to hot spots such as North Korea and Taiwan, where there is the risk of accidental incidents. Kudo also pointed out the lack of an apparatus that allows for multilateral dialogue and trust-building in the region, and the existence of unstable bilateral relationships like that between Japan and South Korea. These reasons are why Kudo believes a platform for debate is needed, and to that end, Japan and the U.S. should serve as the core of such a platform and work together to think about the issues that threaten the region's peace.

Six recommendations for the current point of time 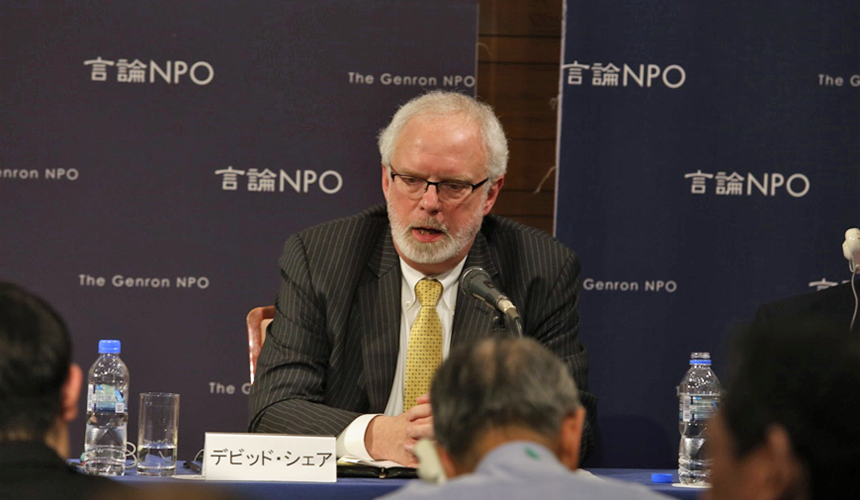 Security Affairs, who raised the issue from a broader Indo-Pacific perspective. Shear pointed to North Korea, Taiwan, and the South China Sea as examples of factors increasing regional instability, but he also pointed out that the U.S., which he said should be attempting to protect the original order, is also contributing to the increased instability. He said that close attention must be paid to trends that appear in the runup to the fall election.

Shear's experience as Assistant Secretary of Defense led him to make six recommendations on what is needed to both compete with China and simultaneously achieve stability.

First, an effort must be made to maintain the various principles of mutual respect of sovereignty and free trade that have supported the rule-based international liberal order. Second, deterrents should be made firmer through cooperation, and Shear emphasized the importance of deterrence as the bedrock of cooperation.

Third, regarding cooperative deterrence, Shear believes that the diplomatic and defense network must be rebuilt into something stronger. Not only is it important to strengthen the network to allow it to handle various types of discussion, including bilateral, trilateral, quadrilateral and other discussions, but that restructuring is particularly urgently needed for the shaky Japan-U.S.-Korea relationship.

Shear's fourth recommendation was to implement an effective means of handling the technology transfer issue in China, while his fifth recommendation was an addendum to the fourth: even while the competitive relationship heats up, people must not forget to cooperate with China when they should.

His sixth and final recommendation was aimed at Japan, and in it, he asked Japan to improve its defensive capabilities.

Shear also called for continued involvement in the South China Sea, through making stronger efforts to oppose the Belt and Road initiative, among other efforts, as Cambodia and other countries are currently unable to resist the economic temptation to join China. At the same time, Shear believes that President Trump should be making a greater effort to attend APEC and other regional summits in order to show the U.S. commitment both domestically and overseas. This sort of engagement is necessary to managing risk in the region's hot spots, and it is important to use the chances presented by international conferences to increase the opportunity for dialogue at various levels, from government ministers to military leaders. Shear believes that this will lead to a multi-faceted framework capable of managing the risk.

Japan-U.S. alliance will remain important until a peaceful order is realized 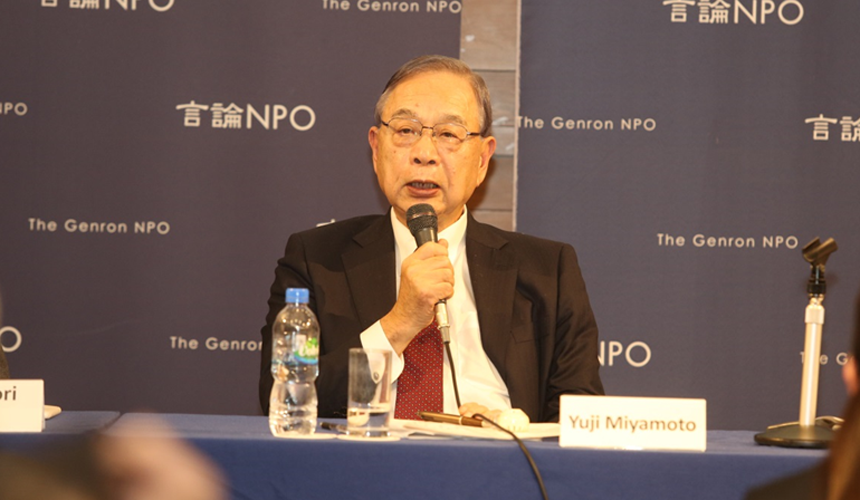 assertion that the U.S. is another factor contributing to regional uncertainty, and brought up that in these conditions, Japan-U.S. cooperation must be promoted, referring to the so-called "Far East" clause of the Japan-U.S. security treaty. Miyamoto also said that in the former Japan-U.S. security treaty, one issue was whether or not the Taiwan issue was included in the definition of "Far East." However, since the 2012 peak of Japan-China tensions regarding the Senkaku Islands issue, this has become an issue of Japan's own self-defense, and expressed it as a "pillar of security in the Japan-China relationship." He continued, saying that even disregarding China's increasing military strength, the overall murkiness surrounding the country continues to increase, and the Japan-U.S. alliance needs to increase its resilience in response. Miyamoto argued that this is absolutely essential for Asia as a whole.

Miyamoto also pointed to the problems associated with both the short-term and mid-term aspects of the current situation, beginning with Taiwan as an example of a short-term issue. Miyamoto is less concerned with President Tsai Ing-wen's increase in discussion regarding independence, and more concerned about President Trump making approaches to Taiwan that China cannot accept from a national security standpoint. If such a situation were to occur, Miyamoto finds it easy to imagine China taking the military option, and if that were to flare up, it would have a profound effect on Japan as well.

Next, Miyamoto stated that building a peaceful order in the region is a mid-term issue, and suggested that discussions with China should be held in order to work together to lay out the ultimate goals that need to be achieved in order to reach that goal. Miyamoto concluded by repeating his assertion that the Japan-U.S. alliance would be extremely important until such a peaceful order can be established.

With the presentation of the themes now complete, the discussion began with an analysis from the U.S. participants regarding risk.

A new approach is required for North Korea, but prudence is needed 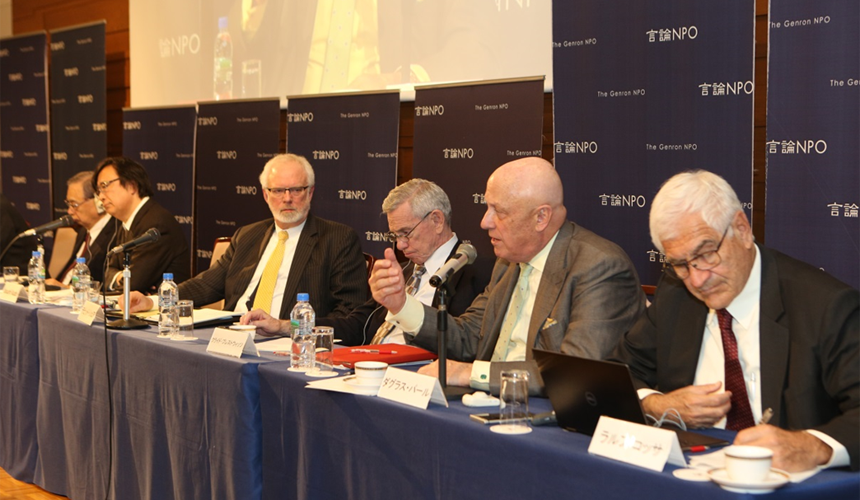 Douglas Paal is a Distinguished Fellow at the Carnegie Endowment for International Peace and he spoke of the situation regarding North Korea. Diplomacy has halted, Paal explained, though it was once thought to be succeeding, and he fears that North Korean Supreme Leader Kim Jong-Un's return to making threats is an attempt to take advantage of Trump having to deal with the upcoming election. Various options must be considered, including new military deployments, but Paal cautioned that the deployment of intermediate range missiles could provoke an over-excessive response from China, which is hyper-sensitive about the Taiwan issue.

"Trump style" is yet another risk

Ralph Cossa is President Emeritus and WSD-Handa Chair in Peace Studies at the Pacific Forum, and he had a more optimistic outlook regarding the situation. However, Cossa shared Paal's opinion regarding prudence in deploying intermediate-range missiles in the Far East, pointing to China' s strong opposition when the Terminal High Altitude Area Defense (THAAD) system, a ground-based anti-ballistic missile defense system, was deployed in South Korea.

Japan must strengthen its defensive capacity

Clyde V. Prestowitz, Jr., President of the Economic Strategy Institute and former counselor to the U.S. Secretary of Commerce, pointed out that cooperation between Japan, the U.S., and South Korea was essential considering the risk factor presented by North Korea, and expressed his concerns about the deepening rift between Japan and South Korea and the wavering U.S.-South Korea alliance.

Prestowitz also touched upon Taiwan, suggesting that Japan and the U.S. have an essential role to play as Taiwan cannot defend itself. However, while Prestowitz praised the Abe administration, with the burden on the U.S. increasing in the current climate, he also called on Japan to increase its defensive capabilities.

The Japanese panelists were next to speak.

The Japanese effort to cope with the ever-changing Japan-U.S. alliance 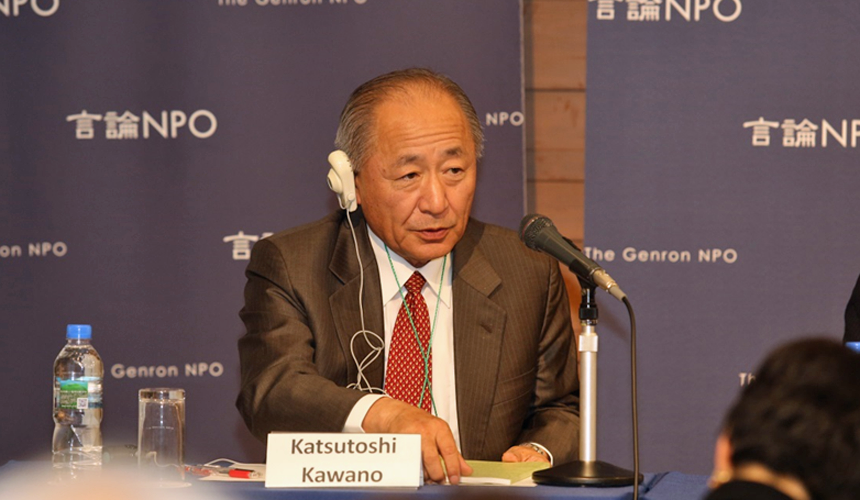 warning that the more the U.S. asks Japan to put in a greater effort, the more surrounding countries will think that the Japan-U.S. alliance is on shaky ground. He also pointed out that the change in the two countries' relative position over time has resulted in a constantly changing relationship, one that may now be slightly out of balance.

Overcoming challenges in both countries to protect the rule-based order

Hideshi Tokuchi added to Kawano's comment regarding the asymmetry of the Japan-U.S. alliance, noting that even if the alliance were theoretically balanced, it is possible that an emotional imbalance is felt on the U.S. side.

Osamu Onoda expressed his belief that China's behavior can be changed. He argued that the most important part of crisis management in the region is increased military transparency on the part of China, and believes that this can be achieved through Japan-U.S. cooperation.

After fielding questions from the audience at the venue, Kudo emphasized that the Japan-U.S. alliance is an indispensable element of a bright future for Asia, and stated his belief that the day's discussions had successfully re-affirmed the commitment to continued strengthening of the alliance. He closed Session 2 of the public forum of the Japan-U.S. Dialogue, expressing his intent to continue the discussions during the First Asia Peace Conference due to open on the following day. 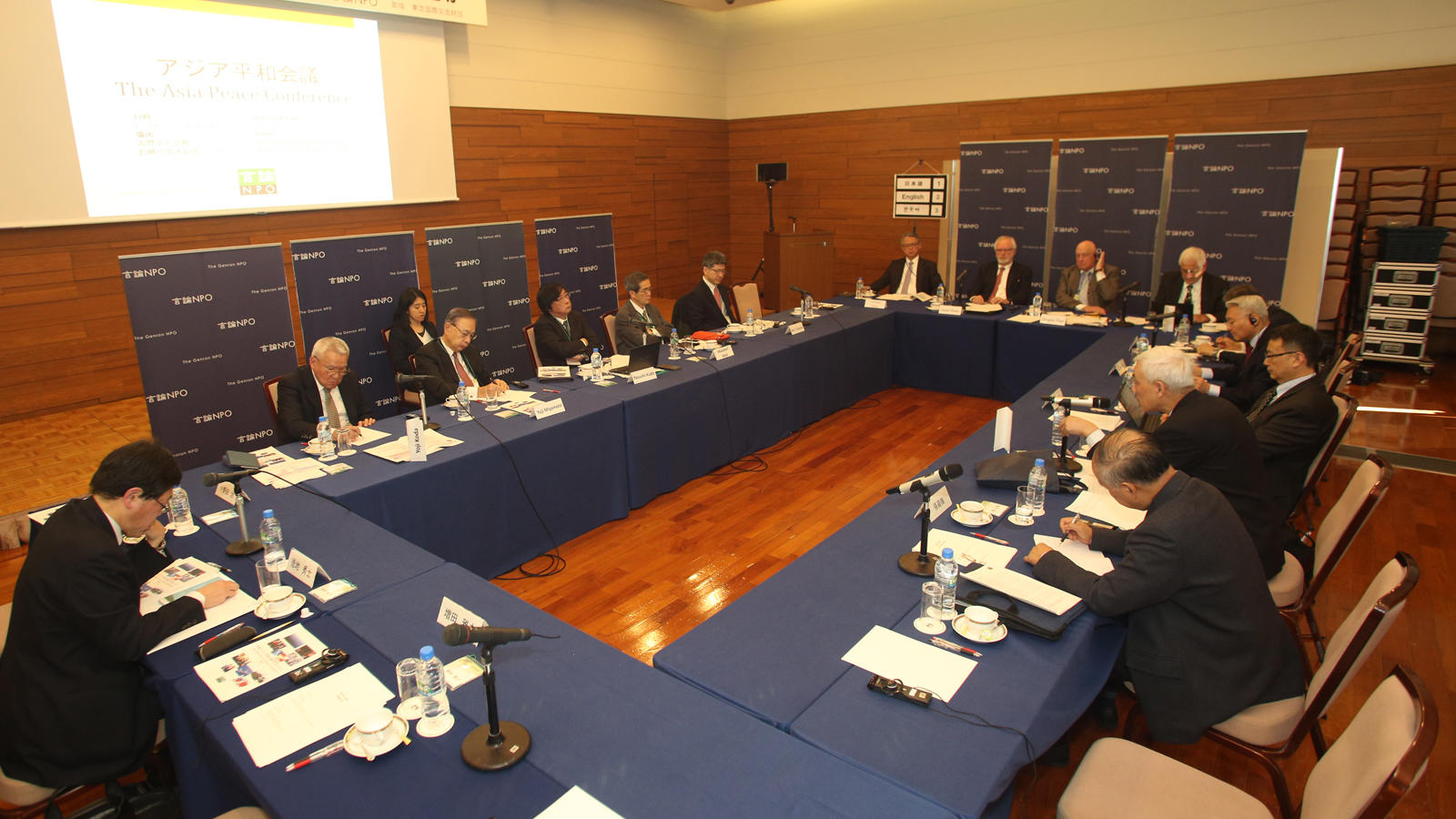 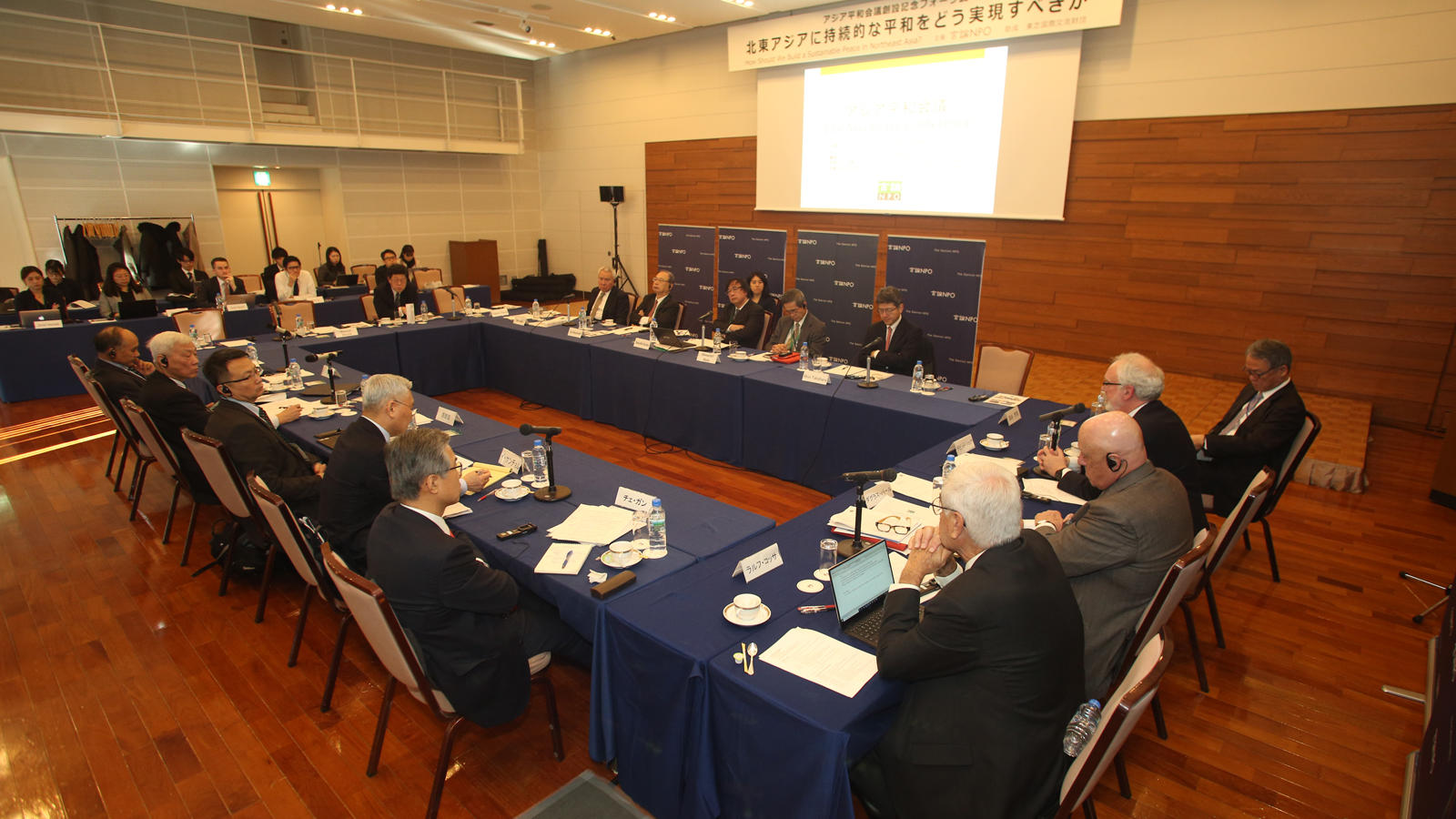 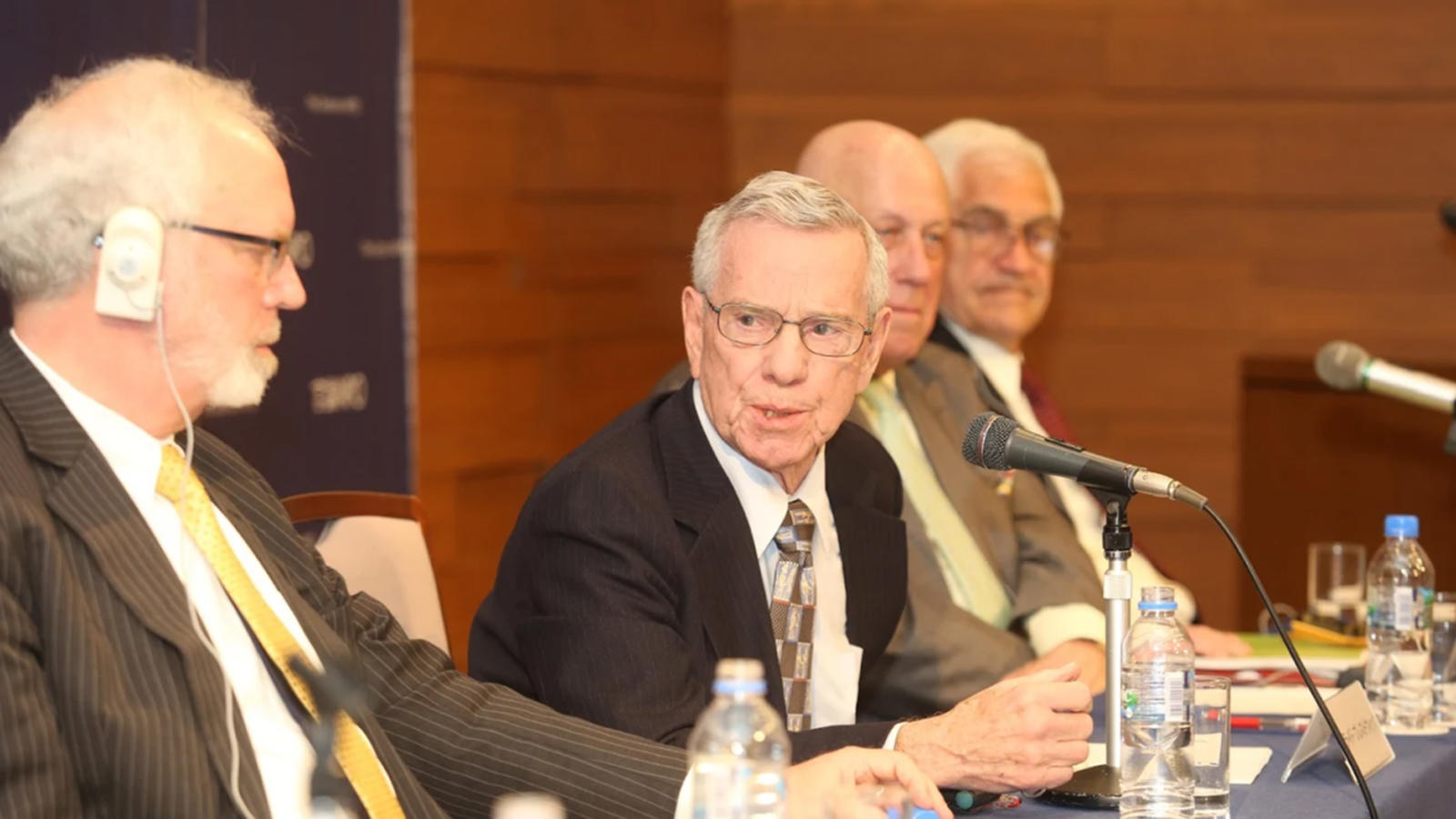