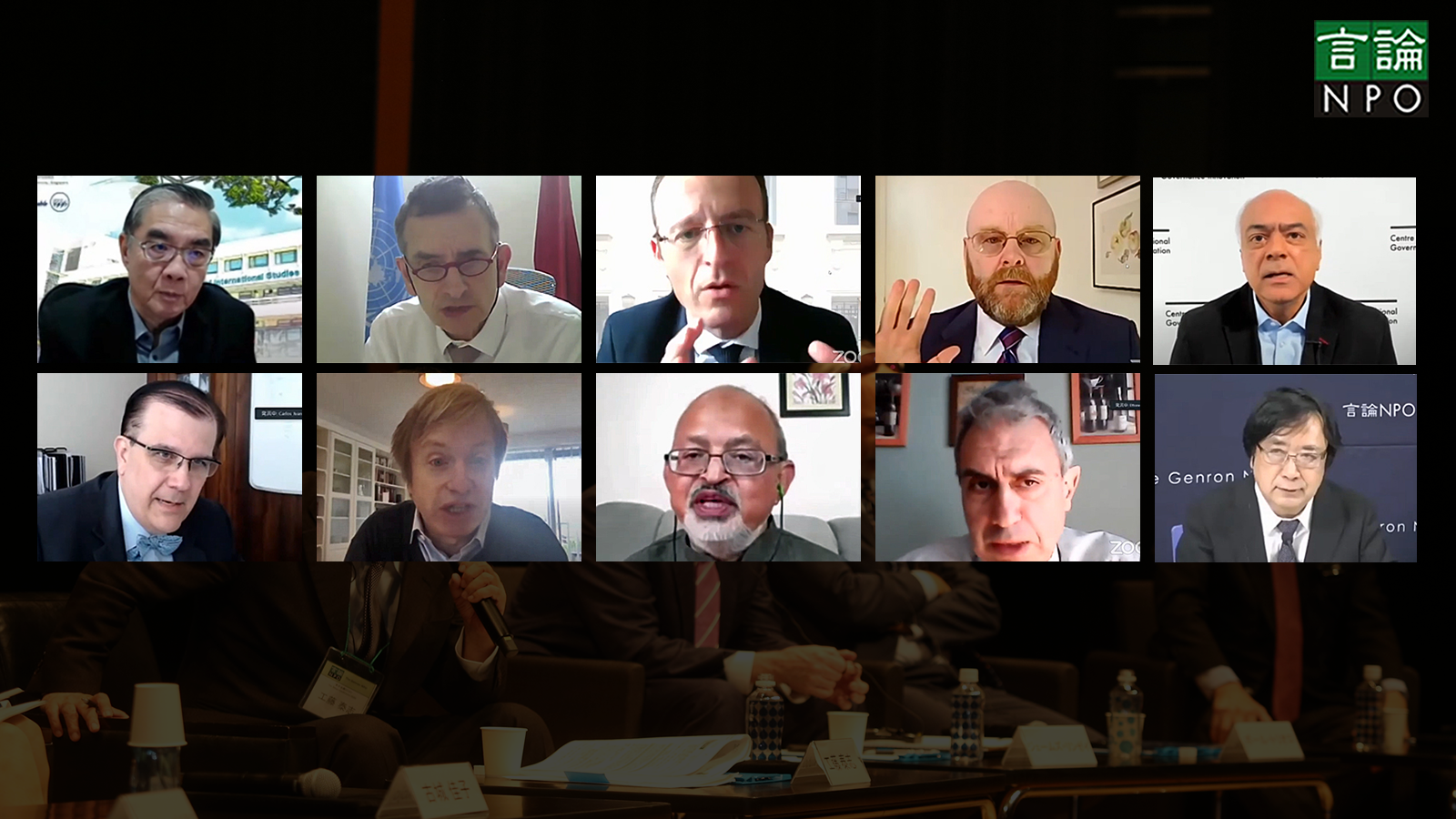 Keeping geopolitical conflict out of international cooperation, and not allowing the retreat of democracy to progress any further

As a part of Tokyo Conference 2021, representatives from think tanks from ten of the world's democracies gathered for an online discussion on how the democratic countries of the world should work together to restore international cooperation and the liberal order. The Biden administration in the US has announced that it aims to return to working with other countries and on restoring democracy. The participants in this session discussed whether such a restoration is currently possible, and if not, what sort of effort on the part of the world's democracies would be required to make it possible.

The spread of COVID-19 has been a significant test of the capability of countries to cooperate with other countries, and the results have been poor thus far. This has resulted in the continued decline of international cooperation, and while the world has some expectations that it will eventually be restored, the participants agreed that at the current point in time, it is difficult to determine whether or not it truly will be possible to repair the damage done.

Many of the participants suggested that the difficulty comes from specific issues, including the current friction between the US and China and the issues of cooperation between the US and Europe, and the fact that the fields in which countries can collaborate are limited because of conflicting interests. It was also noted that no country is yet willing to demonstrate any leadership in bringing about a resolution to these issues, and that the limitations inherent to the member state-centric United Nations system are becoming increasingly clear.

It was the shared belief of the participating think tanks that democracy is currently in retreat and the situation continues to worsen. It was suggested that in many democratic countries around the world, people are losing faith in the institutions and principles upon which their systems are built, and it was reported that attacks on those principles continue. While the appeal of democracy in advanced countries is being tarnished, developing countries are moving towards democracy, the protection of human rights, and the rule of law, and one opinion presented argued that it is the responsibility of democratic nations to ensure the benefits of democracy are more visible.

During the discussions, all ten think tanks agreed that democracy cannot be allowed to retreat any further. Each country needs to put in the effort to bolster democracy domestically, and to cooperate and respond to attacks on democratic values by considering such attacks to be attacks on the competitiveness of democratic countries.

The Genron NPO President Yasushi Kudo chaired the discussions, which began with him questioning what form international cooperation should take when combatting global issues. He pointed out that the COVID-19 crisis has highlighted the weaknesses of international cooperation under the auspices of the member state-centered United Nations system, and asked the participants whether a recovery is truly possible.

The US-China conflict and breakdown in international cooperation will continue

James M. Lindsay is Senior Vice President of the Council of Foreign Relations (CFR) in the US, and he stated that what has become clear in this past year is that international cooperation is decreasing worldwide, in spite of the fact that no one country is able to handle a threat as major as the spread of COVID-19 on its own. Part of the reason for this is that no country has stepped up to lead the effort, and although the Biden administration is attempting to take such a leadership position, it is as yet unknown as to whether it will be successful.

Moreover, he noted that future cooperation will only be possible in areas where Washington and Beijing can agree, predicting that in areas where their interests run opposite to each other, the conflict between them can only worsen. He pointed out that there are only a limited number of areas in which the two countries can find agreement.

According to the analysis of Thomas Gomart, Director of the French Institute of International Relations (IFRI), we are approaching the limits of how much we can depend on the system of international cooperation formed by the United Nations. Rather than reach out to international organizations in responding to this crisis, countries have reached out to corporations for aid in, among other things, the development of vaccines. Gomart said that countries are placing more value on relationships with companies capable of investing in fields that deal with current crises such as COVID-19, including infectious disease and climate change.

Volker Perthes of Germany is the UN Special Representative for Sudan and Head of the United Nations Integrated Transition Assistance Mission in Sudan (UNITAMS), and he believes that international cooperation is absolutely necessary. From that perspective, he sees an increased need for better leadership, but not only among states promoting future international cooperation. He also has high expectations for the contributions of individuals, corporations, regions, and other new actors in the future.

On the other hand, he pointed out that the UN is a symbol of international cooperation, and the role of states will remain important. Perthes believes that we need to think about how to manage friction between major powers and other geopolitical conflict to prevent it having an influence on international cooperative efforts.

Executive Deputy Chairman Ong Keng Yong of the S. Rajaratnam School of International Studies (RSIS) in Singapore agreed that while there are issues of governance in international organizations, international cooperation itself is necessary, and the rules-based order is important for administration of rules and international law, even if modifications are needed.

Sunjoy Joshi is Chairman of India's Observer Research Foundation (ORF), and he said that he has been most shocked that COVID-19 countermeasures have resulted in stronger controls within countries, and an inability to allow for a transnational global response. Joshi acknowledged that at the current point in time, it is difficult to determine how this issue can be overcome, and international cooperative efforts will continue to have major problems for the foreseeable future.

US-Europe relations are another risk factor in international cooperation

The discussion on international cooperation also touched upon the uncertainty regarding the actions of current US President Joe Biden and his administration. Ettore Greco, Executive Vice President of Italy's Institute of International Affairs, said that as uncertainty increases, it is necessary to create areas in which the US and Europe may be able to cooperate in the future. However, elements of concern include the deterioration of the US relationships with both Europe and China under the Trump administration, and the fact that we are as yet unable to predict whether or not US policy regarding these regions will change. On top of this, Europe wants to avoid building a confrontational framework between it and China, but with the competition for technological superiority heating up, Greco believes that the Europe and the US need to align with each other.

Gomart offered a response to this point, agreeing that the EU sees the Biden administration's confrontational stance towards China and Russia as going too far. He also characterized the French Navy's expansion into the Indo-Pacific region not as a move to contain China, but rather as an emphasis of the importance of the global maritime order, and opposed any attempt to bring geopolitical conflict into efforts at international cooperation.

State attempts to protect their citizens during the current COVID-19 crisis have shone a light on the fragility of democratic governance. The talks remained serious as participants discussed whether democracy itself could recover, and what would be needed to ensure that eventuality.

More discussion is needed on how to restore democracy, but it should not be framed as "democracy versus authoritarianism"

Opinion was divided as to whether the issue with democracy lies in reforms to democracy itself or in the competitiveness of the democratic system, but the think tanks share the belief that, in whichever aspect the issue lies, democracy is in crisis.

Greco said that we should not stand by as democracy retreats further, and warned that people have lost trust in the systems and institutions of democracy. Even in Europe, they are seeing a regression in the rule of law, a loss of checks and balances, and overuse of authority. Greco is concerned that COVID-19 will increase pressure on the system and lead to a further decrease in trust. Democracies are now competing with authoritarian regimes, and Greco argued that as democracies respond to attacks on the rule of law and other democratic principles, they must also openly discuss what their system lacks and come up with measures to address issues found.

However, he added that he was skeptical about any sort of great democratic alliance framework because it will be difficult to solve global issues while excluding systems such as that of China.

Lindsay posed his theory that the retreat of democracy is a problem of government policy and the Biden administration aims to make it so the government deals with major societal issues. However, success will be difficult, and the only way to prevent its retreat is to build a democracy that is strong and self-supporting. However, he suggested that it is inappropriate to get the impression that democracy has failed to respond to COVID-19. China successfully contained the virus, but it had a wealth of information since it was the source of the virus, and it was obvious that it would recover more quickly.

Lindsay is wary about framing the discussion in terms of "democracy" versus "authoritarianism" because that might only invite further breakdown of international cooperation.

The discussions this day also delved into a variety of analyses and opinions regarding the factors behind the weakening of democracy.

Rohinton P. Medhora, President of the Centre for International Governance Innovation (CIGI) in Canada, proposed that the dissatisfaction with democracy stems from those who have been left behind by globalization, and by the democracies who haven't prevented that. John Nilsson-Wright, Senior Research Fellow at Chatham House in the UK, presented a similar perspective, suggesting that inequality has led to people's antipathy towards democracy.

President Carlos Ivan Simonsen Leal of the Getulio Vergas Foundation (FGV) in Brazil expressed agreement at the idea that the flood of so-called fake news and other incorrect information is damaging democracy. While this needs to be corrected, he also pointed out that citizens must be educated in how to evaluate the authenticity of the information they receive. In addition, he pointed out another factor behind the democratic decline is that the middle class in the Western world have not been able to fully enjoy the rights they are entitled to for the last 25 years. Without the strong support of the middle class, he said, democracy will continue to weaken.

Finally, Gomart presented the argument that as democracy comes face-to-face with this diverse array of issues, a "transnational framework" will be necessary to continue the discussion on what needs to be done. He added that he looks forward to the further expansion of the Tokyo Conference, and Kudo expressed his hopes for more discussion on the matters at hand before bringing that session's round of heated discussion to a close.