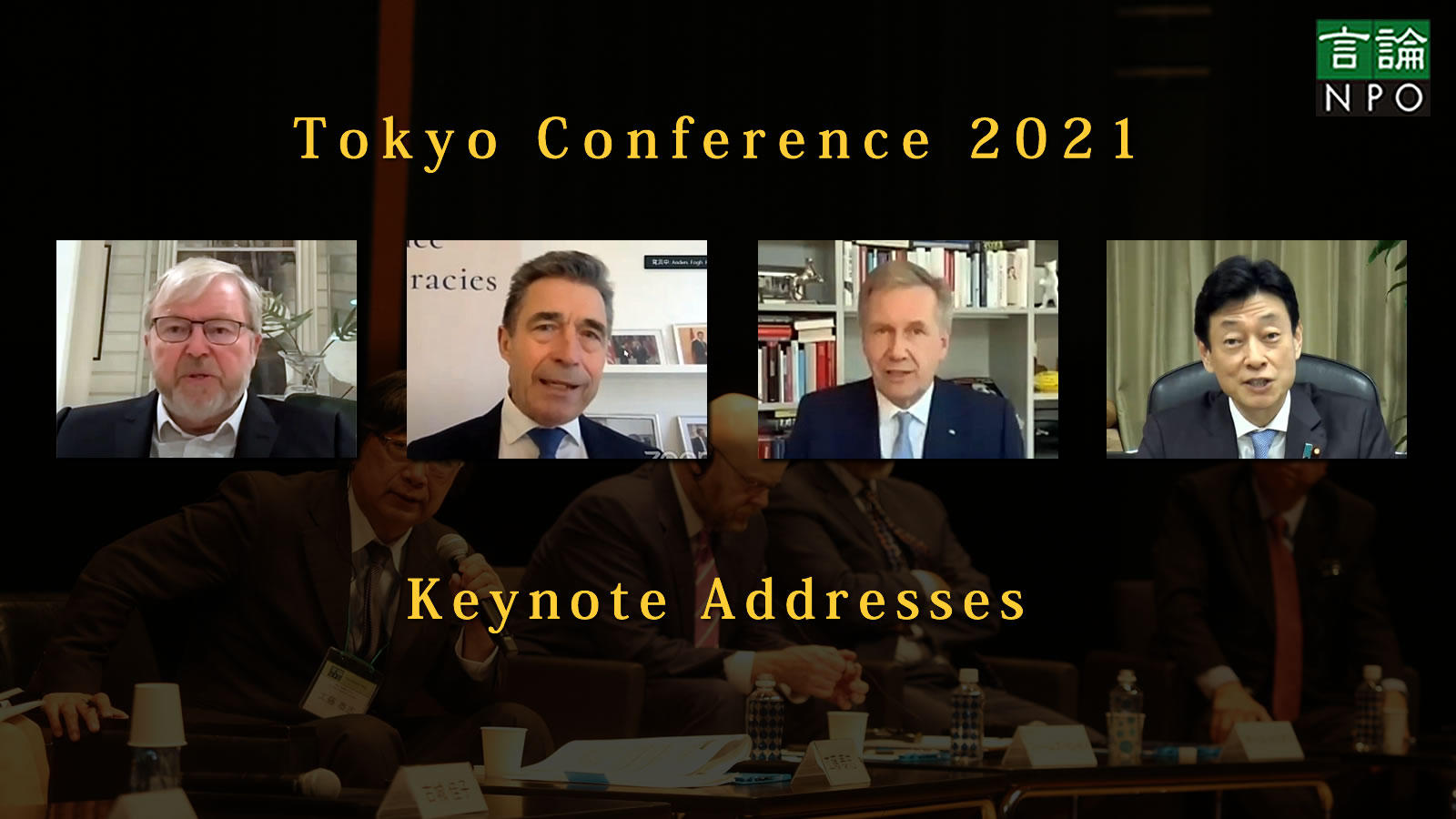 Keynote Addresses: How do we restore the liberal economic order, democracy, and international cooperation?

The liberal international order is anchored in US power, but the Democratic 10 should maintain and strengthen the order for the future 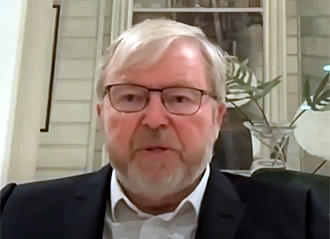 Kevin Rudd (former Prime Minister of Australia, President and CEO of the Asia Society) gave the first keynote address. Rudd offered a number of opinions on the conflict between the US and China, but began his address with a description of what the liberal international order is. He explained that the liberal order was anchored in "the reality of American geo-strategic and geo-economic power," and it was meant to include open economies, open societies, and a system in which state behavior was based in the principles of internationally agreed legal norms. The second pillar of the liberal order is the institutions that the Americans and other members of the order voluntarily built, e.g. the United Nations and in particular the United Nations Security Council, the International Monetary Fund (IMF), the World Trade Organization (WTO). He noted that the question that should be asked now is how robust these institutions are today.

Rudd described that the liberal order faces a few sets of intersecting problems in the current day. The first is that US global power and leadership has been "deeply affected by the experience of the Trump administration," partly because under Trump, the US attacked the credibility of the institutions of global governance and withdrew from numerous international bodies. The second issue is that China sought to occupy the vacuum left behind by the US withdrawal from the international stage to take a leadership role in each of the institutions the US was no longer active in, from the UN Human Rights Council to the WTO. Rudd stated that a third factor is also in play, with the relative geo-strategic and geo-economic power between the US and other states such as China having narrowed, such that the power balance in East Asia and the Western Pacific has shifted dramatically.

Rudd asked what democracies need to do to continue and strengthen the liberal international rules-based order. He believes that two things stand out as potential avenues of resolution.

That "forms the architecture" of the liberal order. However, the world should not rely on the US, which itself is markedly affected by its own domestic political processes and increased internal division.

Rudd argued a point he has recently been advocating for, namely that countries like Japan, the Republic of Korea, Australia, India, Indonesia, Canada, France, Germany, the UK, and political bodies like the EU and its other member states, need to form a core group that Rudd has called "the Democratic 10." Its only objective would be to "drive consensus around the funding and fulfillment of the mandate of these critical institutions of global governance."

He warned that without such an initiative, those institutions will tend to move in the "direction of inertia," i.e. away from the tenets of the liberal order, and in the absence of US leadership, that tendency will increase in strength.

"If America remains partners with us...the liberal international order has a strong future. But if America falters in the future, it will be left to...the Democratic 10, the middle powers across the world, to pool their resources, to underpin the future of international law, and the institutions and arrangements of open society, open economies, and ultimately, of open politics as well."

Democracies should unite to protect freedom and democratic values 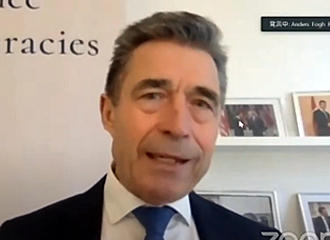 The second keynote address was given by Anders Fogh Rasmussen, former Prime Minister of Denmark and 12th Secretary General of NATO, and founder of the Copenhagen Democracy Summit. Rasmussen noted that in the 16months since he last visited Japan, the world has changed dramatically, and he called for the world to turn back the trends that have appeared during the pandemic by providing more freedom, fairness, and democracy for all people.

Rasmussen offered three suggestions on how to "fight back for freedom."

"First, we should cement a democratic alliance to retune multilateralism. Secondly, we need to make technology work for democracy. And thirdly, the free world needs a new a united and democratic approach to the Indo-Pacific," he said.

One means of achieving this could be "an economic Article 5 among democracies," a reference to NATO's Article 5, which codifies the principles for collective defense, i.e. that an attack on one ally is an attack on all allies. This could be used to counter non-military aggression by competitors, such as when authoritarian regimes use economic power to coerce other countries and achieve their political objectives, as recently seen with China bullying Australia by suspending imports of Australian wine and China's ban of the import of Taiwanese bananas.

Rasmussen continued by warning that technology can damage people's freedoms and that digital authoritarianism is "on the rise," emphasizing the importance of establishing new rules and norms for emerging technologies.

"These rules and norms will guide every aspect of our lives - economies and security - for generations. This is why we need to build a technological alliance of democracies," he said. He noted that US President Joe Biden has the "makings of a blueprint" on how to develop this with the recent report by the US National Security Commission on Artificial Intelligence, which lays out a plan for a coalition that will establish norms and values for the use of emerging technologies.

Finally, Rasmussen stated that the EU needs a "robust strategy for the Indo-Pacific" and that one thing is clear when it comes to that region.

"The front line between the free world and the autocratic world is being drawn in the Indo-Pacific, and Europe lacks a game plan," he said.

He continued by explaining his belief that Europe is torn between its commercial interests in the Indo-Pacific and its values, and said that it needs a strategy on how to integrate its economic and political interests with other democracies in the region. Rasmussen believes that the EU also needs a strong military component to show that it is willing to back up its statements on protecting "freedom of navigation and defense of democracy in the region."

Rasmussen concluded with a powerful statement about the potential for the future.

"As we build back from COVID, we have the opportunity for change. We can put democracy back in the ascendency around the world. It is a cause for which millions of freedom fighters have dedicated their lives, and for which many have paid the ultimate price. It is a cause worth fighting for because there is no greater force on this planet than the desire for human freedom. So, let's go to work in building an alliance of democracies that will deliver freedom, democracy, and peace for generations to come."

Times may be tough, but our democracies are holding strong
Important to remain tolerant and understand each other 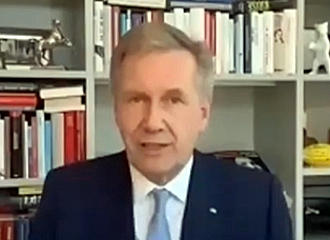 The next keynote address was given by former German President Christian Wulff. He began his address by observing that while democracy and liberal values are clearly under strong pressure from both within and without, they have yet to be beaten into submission.

"Times may be tough, but our democracies are holding strong," he said, offering the insurrectionist attack on the US Capitol on January 6 as an example. While security on the day was lacking, Wulff explained how the strength of democracy lies in its ability to defend against that sort of attack, and in its ability to process such incidents using legal and legislative means. He also mentioned the demonstrations currently taking place in Myanmar - evidence that the people of that nation desire democracy.

However, he also warned that the COVID-19 crisis has increased the gulf that lies between countries whose actions are based in international cooperation and countries seeing an increase in nationalism. This has led to increased multipolarity of the geopolitical framework, and has highlighted the weaknesses and limitations of multilateralism. In looking to address these issues, Wulff pointed out that the intrinsic nature of international cooperation lies in the fact that it is a quest for compromise and mutual understanding. Maintaining and fortifying that order is the concern of all nations, who stand to benefit from it in the same way as Germany and Japan have done since the end of the Second World War.

Finally, he pointed to developments over the previous year and a half that should engender hope for the future, including increased international cooperation in vaccine distribution due to the COVID-19 pandemic, scientists sharing expert knowledge without concern for national boundaries, and an increase in donations and other philanthropic activities in civil society.

"Our success and our resilience over the next few decades will depend on how advanced our technologies become, how capable our systems of governance are, and on how productively and effectively we use the resources we have," he said.

Wulff borrowed from the words of UN Secretary-General Antonio Guterres, when he concluded by explaining that in order to prepare for crises such as those posed by the spread of infectious diseases, "We need to build a global and inclusive multilateral network that connects not only states, but also corporations, cities, universities, non-profit organizations, and other such actors." 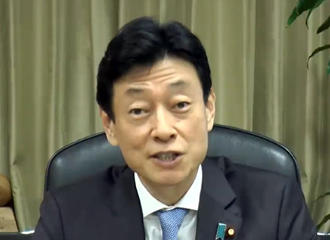 The final keynote address was given by Yasutoshi Nishimura, Economic Revitalization Minister of Japan. Nishimura stated that he believes the crisis sparked off by the spread of COVID-19 has highlighted the weaknesses in governments around the world. In Japan, he described that crisis handling has been aggravated by the nation's delayed digitalization, the increase in irregular employment, and the position of women and others in more vulnerable positions in Japanese society. Nishimura emphasized that the coronavirus crisis should be taken as an opportunity to immediately advance reforms that could solve the issues Japan faces.

In concrete terms, Nishimura expressed his desire to 1. implement digital governance and promote the "Digital New Deal", 2. to promote the "Green New Deal" aimed at achieving carbon neutrality by 2050, 3. to create a world-class research foundation through nurturing young researchers and encouraging collaboration between industry and academia, and 4. to invest in people and overcome the issues raised by Japan's declining birthrate and aging population by creating an environment in which women, the elderly, and other motivated individuals can become more active in society.

Finally, Nishimura noted that international cooperation is particularly important in times like these when countries tend to turn inwards. He concluded his address by stating that Japan should continue to drive free trade and investment, and demonstrate its leadership in all areas as it supports the growth of the global economy.