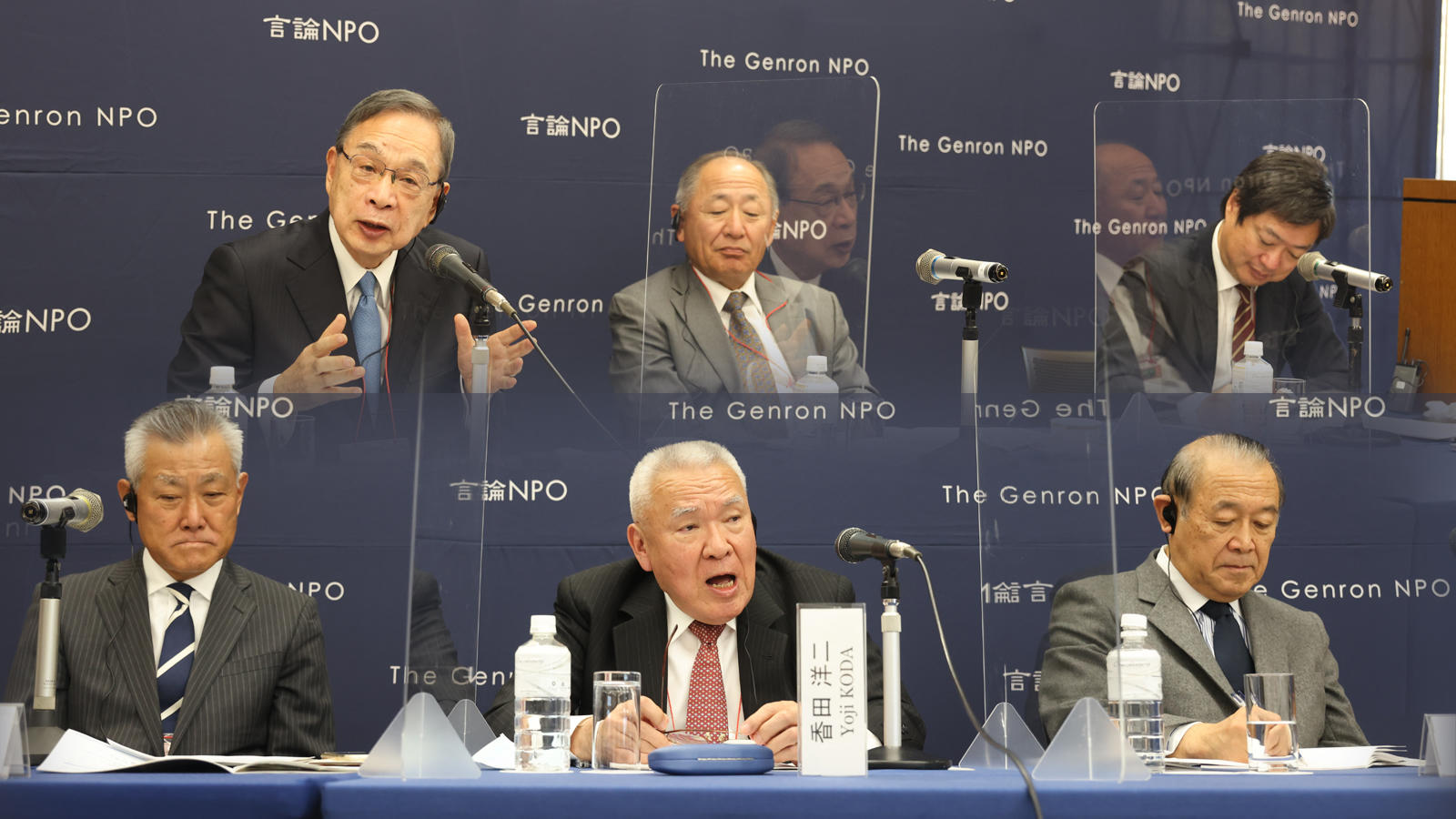 On the second day of the 17th Annual Tokyo-Beijing Forum in the afternoon of October 26, a security breakout session was held to discuss what sorts of cooperative initiatives Japan and China could launch to avoid conflict and bring about a peaceful order in Asia. The following twelve individuals from Japan and China took part, and they included former high-ranking military officers and ambassadors among their number.

Europe has joined Japan and the US in challenging China

The discussion was launched by Yoji Koda, a retired JMSDF Admiral and the former Commander in Chief of Japan's Self Defense Fleet. Koda began by noting that European countries have implemented a new security policy for Asia, exemplified by the UK's deployment of its state-of-the-art aircraft carrier, the Queen Elizabeth, to the South China Sea. To Koda, this is an indication that the nations of Europe have begun to join other countries in challenging those actions of China that violate international law. Moreover, Koda stated that "China should carefully explain (its intentions)."

Regarding the Taiwan issue, Zhang Tuosheng stated that while China is holding fast to its desire for peaceful unification, he wanted to drive home the point that Japan should give its firm support to the One China principle, which has been the status quo since the two countries normalized relations. 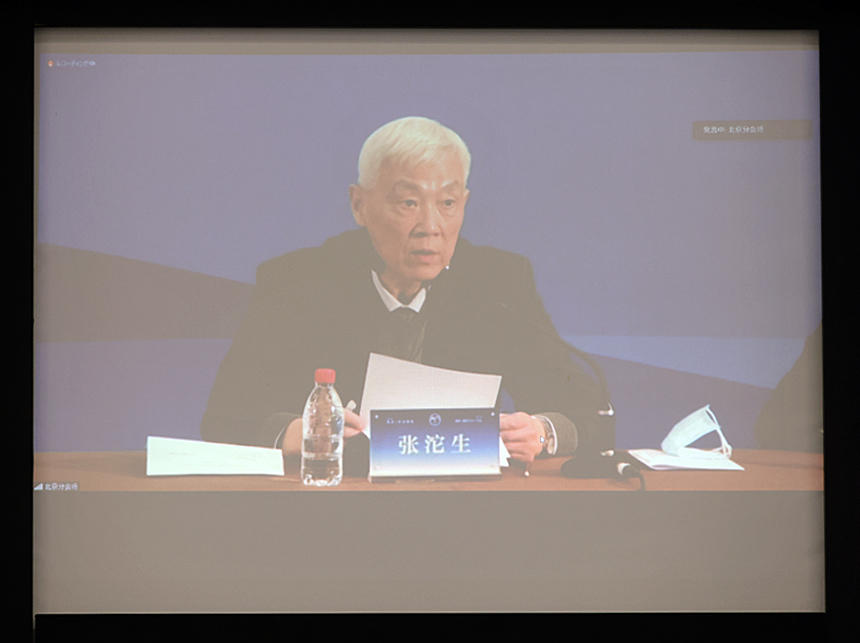 Military pressure on Taiwan would actually drive it further from unification

In response, retired JASDF Lieutenant General Osamu Onoda reminded the participants that advanced military aircraft from China have penetrated Taiwan's air defense identification zone many times since October. In addition, China's air force has improved its capabilities in a qualitative way, which has resulted in Japan and the US becoming strongly concerned about the situation. Onoda suggested that the use of military intimidation would only drive Taiwan closer to the US, and that what is needed is "cross-strait dialogue and exchange rather than coercion."

Yao Yunzhu is a Senior Advisor at the China Association of Military Sciences, Director Emeritus of the Center on China-American Defense Relations, and a retired major general of the PLA. She expressed the worry that the Japan-US alliance is growing closer, and simultaneously shifting its focus from North Korea to target China. Yao noted that proof for this could be seen in the joint statement released after the Japan-US Security Consultative Committee (Japan-U.S. "2+2") in March, which noted "serious concerns" in relation to China, and in the joint statement from Japanese Prime Minister Yoshihide Suga and US President Joe Biden in April that mentioned Taiwan. This is particularly evident when considering the Taiwan issue, regarding which Yao stated that these actions show that the US has gone from seeing Taiwan as a burden, to seeing it as an asset in its strategy for Asia. This US policy shift is directly linked to the shift seen in its ally, Japan, and Yao said that this has raised some serious concerns for China. In addition, she is pessimistic about dialogue with the administration of Taiwanese President Tsai Ing-wen because of its rejection of the One China policy, as any dialogue could be perceived as recognition of the idea of Taiwanese independence.

Katsutoshi Kawano, former Chief of Staff of the JSDF, noted that the biggest cause for the mutual concern and growing suspicion felt by Japan and China is the lack of dialogue and exchange between the two countries. He explained that the underlying cause for the interruption in dialogue was the Japanese government's nationalization of the Senkaku Islands in 2012, and reached out to China, saying, "It has been nine years. Perhaps it is time to look at the situation from a broader perspective and resume talks."

To that end, Kawano suggested that a path to security cooperation between Japan and China could be found in responding to North Korea's nuclear weapon and missile programs.

Wu Huaizhong, Deputy Director of the Institute of Japanese Studies at the Chinese Academy of Social Sciences (CASS), pointed out that Japan's attitude towards the Taiwan issue under the Suga government is clearly different from that of previous administrations. Wu stated that strategic dialogue is now necessary due to the growing dissension between Japan and China. At the very minimum, he said, the two countries can find agreement in the fact that neither wants military conflict in the Taiwan Strait, and that point of consensus is enough to serve as a foundation for dialogue.

Dialogue needed to prevent miscalculations due to new technologies

Ken Jimbo, Assistant Professor in the Faculty of Policy Management at Keio University, presented two issues for discussion. First, he noted new technologies are being developed in each country without any understanding of the potential dangers of using those technologies, pointing to drones, directed energy weapons, AI weapons, satellite-based weapons, hypersonic weapons, and other tools of war as typical examples. Jimbo noted that uncrewed aerial vehicles are more capable of attacking crewed vehicles and taking other high-risk actions, therefore conflicts are more likely to escalate. He emphasized the need for dialogue in order to reduce that risk.

Jimbo also pointed to the issue of cyberattacks and their potential for causing real damage to important infrastructure, explaining that "the era is coming where cyberattacks could kill people." That is why it is important to also consider how to manage cyberspace. 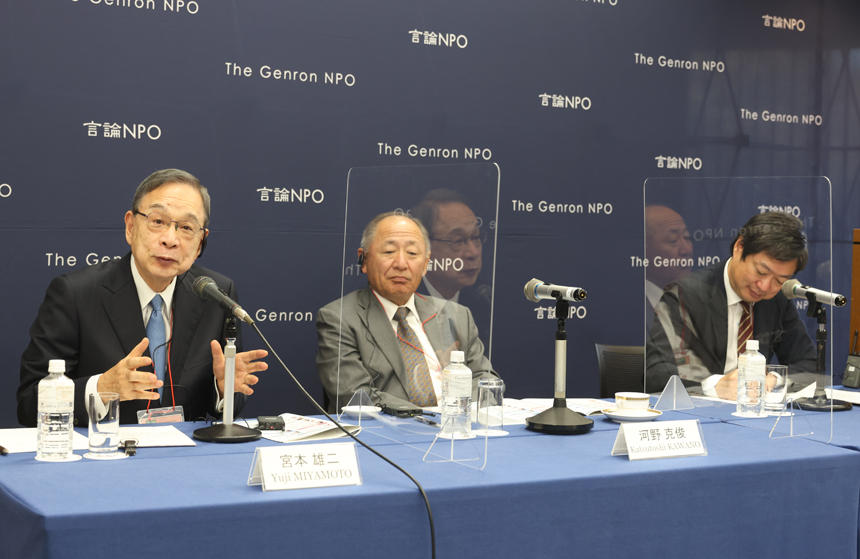 Yuji Miyamoto is Chairman of the Miyamoto Institute of Asian Research and former Japanese Ambassador to the People's Republic of China, and he indicated that it is easy for distrust of each other in the security area to devolve into an arms race. He pointed to the once fierce arms race between the US and the Soviet Union for a possible answer to this. Through negotiations regarding armaments control, the two governments were finally able to gain a deeper, mutual understanding of each other's intentions and abilities, and that led to strategic stability. Miyamoto stated that it is necessary for Japan and China to engage in a similar effort to achieve a deeper mutual understanding through dialogue.

Miyamoto mentioned that attempts on the part of both the US and China are engaged in conspicuous actions aimed at determining where each country has drawn their "line in the sand" when it comes to the Taiwan issue. Zhang Tuosheng emphasized that the US is engaged in much more obvious provocations that already cross that line through the landing of military aircraft in Taiwan and other actions. Yao Yunzhu agreed, laying the responsibility for the current situation at the feet of the US, and describing China' s actions as merely defensive in nature.

Regarding new technologies, and hypersonic weapons in particular, China is conducting launch experiments with hypersonic weapons capable of carrying nuclear warheads. Koda noted that this will "change the balance of strategic nuclear power," and suggested that China should join the nuclear disarmament talks and armament control negotiations between the US and Russia. In response, Liu Hua dismissed the idea, describing the New Strategic Arms Reduction Treaty (START) as solely between the US and Russia, but Wu Huaizhong noted that talks are needed since other countries, such as North Korea, are also developing hypersonic weapons. 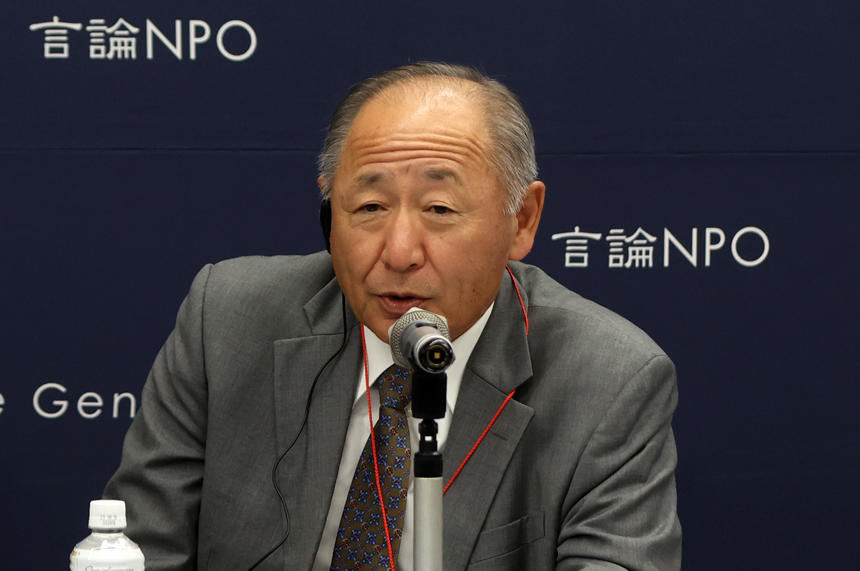 On the issue of Japan-China dialogue, Kawano asked, "Is China open to dialogue between Chiefs of Staff and mutual ship visits?" Miyamoto added his support to that by describing how the unease felt by people in both countries is caused by the lack of high-level discussion, saying "The people will feel more at ease if their leaders could meet with each other."

Moderator Chen Xiaogong brought the discussions to a close, noting that the session was fruitful in reaching a consensus on the need to resume dialogue between the two countries and to discuss new technologies.

Chen Xiaogong, retired lieutenant general of the People's Liberation Army Air Force of China
Yao Yunzhu, retired Major General of the Chinese People's Liberation Army, senior Advisor to the China Association of Military Science
Zhang Tuosheng, senior Fellow, Chairman of the Academic Committee, Director of the Center for Foreign Policy Studies at China Foundation for International and Strategic Studies.
Wu Huaizhong, director for political studies at the Institute of Japanese Studies of the Chinese Academy of Social Sciences
Gui Yongtao, vice President of the Institute of International and Strategic Studies, Associate Dean and Associate Professor at the School of International Studies(SIS) in Peking University(PKU).
Liu Hua, chief of a think tank of Reference News