The results of the The 9th Japan-China Joint Popular Opinion Survey were released the other day. This is a joint survey that has been conducted by The Genron NPO and the Chinese newspaper publisher, China Daily, since 2005. The results of the 9th survey were publicized widely by both the Japanese and Chinese media.

With 90.1% of the Japanese holding negative impressions of the Chinese and 92.8% of the Chinese holding negative opinions of the Japanese, these results were the worst of the past 9 surveys. However, the rapid aggravation of impressions of one another's countries and of perceptions on current Japan-China relations are not the only shocking results. Results also showed a crucial change in public opinions that cannot be ignored when considering Japan-China relations today.

Japan-China relations are currently in a perilous state. Here I would like to explain why I have come to this conclusion.

Before I begin, I would like to first share a basic perspective in considering trends in public opinion in both Japan and China. First of all, awareness of one another's counties depends largely on domestic media. Many people in both countries have very scarce channels or experiences from which to build up direct knowledge of the other country, and must rely on indirect knowledge from domestic media coverage for their information. This tendency was especially significant among the Chinese. The opinion poll showed that (of the Chinese) only 2.7% have had experience going abroad to Japan (this number was 14.7% for the Japanese) and a mere 1.3% have close Japanese friends or some conversation with Japanese people (this number was 20.3% for the Japanese). Additionally, 80.3% of the Chinese say their knowledge on Japan is "mainly gained from domestic (Chinese) media."

The second characteristic is that, while many Japanese form their understanding of China through a view of China as it is today, there is a strong tendency for the Chinese to see today's Japan through a historical awareness centered on the war.

For instance, when asked, "What do you think of when you hear Japan?" 50.3% say "the Nanking Massacre." In a question asking "the reason for aggravated impressions (of the other country)," the most common response for the Chinese was "opposition regarding the Senkaku/Diaoyu Islands" (at 77.6%), while the second most common response was because the Japanese "do not feel remorse over their history of invading China" (at 63.8%). These tendencies are not limited to this year's survey and have been observed in the past 9 polls. This time, however, the dispute over the Senkaku/Daiyou Islands was tied to the issue of historical awareness, causing a full-scale aggravation of sentiments. Ill feelings towards Japan were ever more strengthened because many of the Japanese further responded to the anti-Japanese emotions and actions of the Chinese.

The results that seem especially telling of Japan-China relations' perils are the following two results obtained from the Chinese respondents. The first is the result of 48.9% of the Chinese respondents viewing present-day Japan as "Expansionist" representing the dominant awareness towards Japan. Furthermore, this view has largely increased since last year's 35.1%. (See Chart 1) 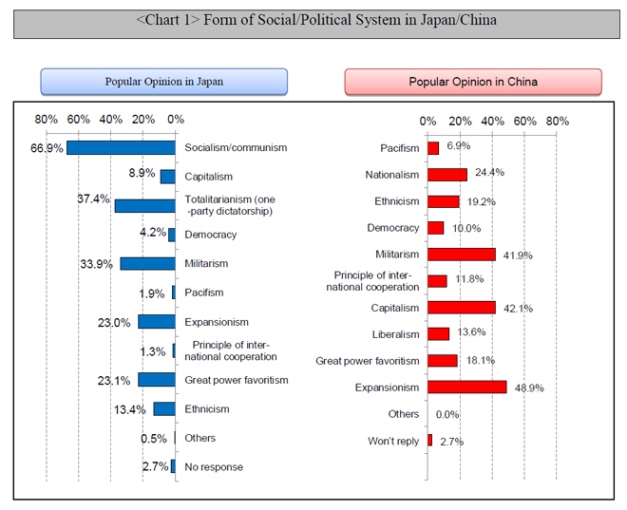 For us, "Expansionism" is defined as a powerful country pressing its claims on another country through the use of force. While it is unbelievable to the Japanese that Japan could be viewed as "Expansionist," surprisingly, half of the Chinese state this opinion. What I am further surprised by is how the Chinese evaluate their domestic media. The percentage of Chinese who consider Chinese media coverage (which has been said to have heated up after the conflict over the Senkaku/Daiyou Islands last fall) as "objective and fair" was 84.5%, up 20 points from last year's 64.4%.

In a round-table talk hosted by Genron NPO, a scholar mentioned that "When you go to China and turn on the TV, you'll find a female newscaster in military uniform presenting the news program with a row of military experts, extensively promoting how Japan will expand its military preparations and attack China." Until last year, the percentage of Chinese who responded that their country's media coverage was "objective and fair" remained around 60%. This year, this number has increase to 90% - why has there been such a decrease in objective Chinese perspectives on the heated media coverage and actions?

Objective Perspectives are Lessening on the Chinese Side

The reason I focus on the perceptions on "Expansionism" and "media coverage" found in Chinese popular opinion is because I feel these two responses brilliantly explain the changes that have occurred within the Chinese people.

It can only be imagined that the unreasonable logic of viewing present-day Japan as "expansionist," must come from the persistent propaganda of the government and heated media that promotes it.  A friend of mine who is involved in diplomatic relations explains the background behind the perceptions on Japan's "Expansionism" in the following way:

As a result, Chinese popular opinion has not only aggravated, but also has gone as far as spinning out of control. I feel that perhaps this situation was beyond what the Chinese government had anticipated. The biggest concern with such aggravating public opinion is that negative emotions towards one another's countries may make restoring the state of affairs extremely difficult.

The reason why the current state is so complex and serious is because both Japan and China had created obscure and indefinite narratives on the islands as a solution for territorial issues. Since diplomatic normalization, both the Japanese and Chinese government set aside the issue of the Senkaku/Daiyou Islands and had not recognized the issue domestically. In my opinion, the reason why the political leaders of both countries have refrained from engaging with the territorial issue is because they wanted to avoid provoking popular revolt. Thus, political leaders handled the issue by construing separate opinions geared towards public opinion in their own countries. And, as a result, effective control of the Senkaku/Daiyou Islands by Japan had never been widely known by the Chinese public. These delicate narratives around the islands were, in a way, the wisdom of our forebearers who wanted to avoid needless conflict.

It was Japan who broke the status quo. Those in political power in Japan at the time may argue that, if they had not nationalized the Senkaku/Daiyou islands, they would not have been able to stop the former governor of Tokyo from purchasing the territory. However, this logic failed to gain understanding from the Chinese, and now it is impossible to recreate the tacit agreements on setting aside the territorial issues between the two countries. From the Chinese perspective, the sudden nationalization of the territory, , must have been perceived as a forceful act of changing current conditions. I believe this is a large reason why half the Chinese view Japan as "Expansionism."

After nationalization, government talks between the two countries stopped. Japanese politicians then roused Chinese public opinion with their comments and visits to the Yasukuni shrine; as a result, negative feelings towards Japan by Chinese people was channeled through anti-china media coverage. Ultimately, this reflected back on Japanese public opinion as heighten anti-China sentiment. I feel that it was in this political mood, preoccupied by the need to handle the situation, that China introduced the concept of "Expansionist" Japan into the public opinion in their country, thereby generating public opinions that are incomprehensible from the Japanese perspective.

The Starting Point is to Acknowledge the Existence of Territorial Dispute

I consider the Senkaku/Daiyou Islands to be, both historically and legally, a part of Japanese territory. However, now that we have opened Pandora's Box, it is extremely difficult to trace back our "forebearers' wisdom" and shelving the dispute as we had in the past. Solutions to issues dealing with territory involve the nations' sovereignty and are extremely difficult. Therefore, we are in a situation that requires new wisdom for "controlling" the issue so that the dispute does not develop into military conflict.

The lack of hotlines between law-enforcement boats on the East China Sea heightens the already existing tensions between the two countries. An accidental happening may lead to an irreparable situation in these circumstances. The definitive lack of dialogue between the governments is responsible for such conditions.

I have had a number of talks in Washington D.C. with government officials in the U.S. and the world seems to be focused on is avoiding conflict on the East China Sea. If conflict ensues in Eastern Asia, it will bring damage upon the economies of Asia as well as the world, and a constructive future for Asia will no longer be possible.

August 12 was the 35th anniversary of the signing ceremony for the Japan-China Peace and Friendship Treaty. Its first article called for the use of "peaceful means to settle all disputes."

Now is the time to return to this starting point; it is a historic time in which not only the government but we, the people must, embark upon dialogue as stakeholders that share this common issue in Eastern Asia.