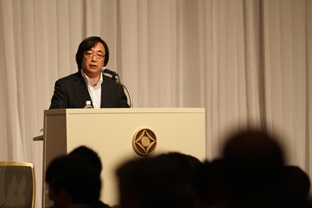 Yasushi Kudo, Representative of The Genron NPO, criticized on Oct. 20 the administration of the Democratic Party of Japan for failing to meet the Japanese people's expectations for a big change in politics.

Kudo made the remarks during a weekly radio program, titled "ON THE WAY Journal", which was aired on Oct. 20 and 27 via more than 30 regional FM radio stations all over the country. He regularly appears on the program to comment on various issues.

The excerpts of Kudo's remarks are as follows:

Former Prime Minister Yukio Hatoyama's administration collapsed, and Hatoyama was compelled to step down. This was because he had failed to realize almost all the promises he had made to the nation in the general election. Thereafter, Naoto Kan succeeded him and described his administration as 'the Cabinet that was true to its words'. However, I don't sense that the Kan Cabinet is succeeding in narrowing the wide gap between politics and the people. The birth of the Kan Cabinet is not the choice of the people in that his administration has not yet been made subject to the public mandate, or the general election. It is true that Kan and all the members of the Lower House were elected or re-elected in last year's general election. However, Hatoyama resigned without materializing his election promises, only to be replaced by a new prime minister who has begun to deliver different messages to the public. Under such circumstances, many people apparently feel that they are kept out of the loop.

The bottom line is that the Japanese people are beginning to sense vaguely that their expectations for Japan's big change (as a result of the change in government) are being betrayed and that the distance between the people and politics remain poles apart.

At that time, many people, including myself, still placed high hopes on politics, or political parties and politicians, to bring about a big change in this country. But now, we have learned that such expectations have been betrayed and that we, citizens, must act and speak out, as the parties concerned, to squarely address Japan's social problems. I am convinced that without our proactive action, this country can never be changed.

The Hatoyama Cabinet was rather irresponsible. Hatoyama often went back on what he had promised in public. He has been touted in the political cycles as an "alien," and now I agree. So far, Kan does not appear to be like an alien. Originally, he was an activist of civic movements, as the secretary-general of the civic organization in support of Fusae Ichikawa, Japan's legendary female activist of suffragette movements and former member of the Upper House. Therefore, Kan was expected by many to act like a civil-rights campaigner and to speak directly and candidly to citizens. Again, such expectations seem to have been betrayed.

In his policy speech before the National Diet in October, Kan referred to "achieving economic growth, putting public finances on a sound footing, and reforming social security" as his Cabinet's three important policy agenda that require solutions. He is right in pointing to these three important areas as his agenda for the future of this country. In actual fact, these sentiments were also shared by Takeo Fukuda and Taro Aso, two former prime ministers in the closing days of the LDP politics. In other words, any government, LDP or DPJ, must address the same agenda, which includes reforms to the social security system, the aging population and the resulting decline in population, reconstruction of national finances that are on the verge of bankruptcy, and reinvigoration of the national economy. 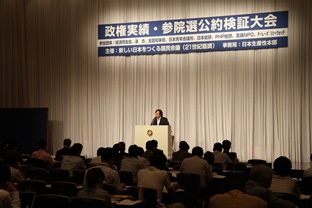 In that case, what matters most is the planning ability or the capability of finding solutions to these national tasks. The problem is that in the midst of Japan's political climate today, competition among political forces on this matter is lacking.

Once, we were tempted to believe in the effectiveness of a two-party system (like Britain's) as a cure-for-all. This is no longer the case. Even in Britain, the two-party system does not work well today, paving the way for the formation of a coalition government involving the leading Conservative Party and the third-largest Liberal Democrats. The fundamental premise for the two-party system to function effectively in Japan is if each major party is well equipped with planning skills.

If Kan is serious about tackling the issue, he is obliged to explain his Cabinet's analysis of the situation and their proposed strategies. The impending crises in front of us are financial collapse, economic stagnation and unemployment, aside from the prevailing anxiety regarding the future of social security, pension systems and medical care. At the core of the issue is the ability of political parties to solve these future tasks and that they should be pitted against each other in the contest of such capabilities, at least in theory.

In reality, Japan's politics is, I believe, still on its way to a big change, as it cannot yet depart from old-style politics. A dramatic event could probably be in the making. As stated earlier, it is up to us, the people, to find the exit out of the long tunnel of Japan's political stalemate and change the course of Japan's politics.

- All excerpts of comments are translations from Japanese to English