Two senior Genron NPO advisers have expressed their growing concern over the course of the ruling Democratic Party of Japan following the launch of the much publicized Cabinet of new Prime Minister Yoshihiko Noda. Hiroya Masuda and Yoshihiko Miyauchi, members of Genron NPO's Advisory Board, stressed the need for the new prime minister to seriously address the policy fiasco amid the lack of governance that has characterized the DPJ administration since September 2009. 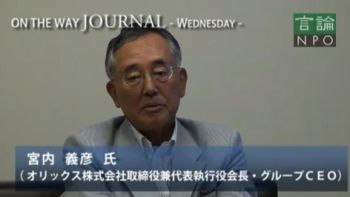 Noda, 54, who came to office Sept. 2, is the third DPJ prime minister in the past two years as the two preceding DPJ Cabinets of Yukio Hatoyama and Naoto Kan were short-lived. "Should Noda's Cabinet fail, I think the DPJ itself will vanish," Masuda said in an interview with Genron NPO Representative Yasushi Kudo.

The DPJ must scrutinize the causes of its failures under the past two Cabinets so that it may stay in power in the years to come, said Masuda, a former governor of Iwate Prefecture, and former minister of internal affairs and communications. Miyauchi, chairman and chief executive officer of ORIX Corp., said in a separate interview that Noda should strive to overcome the "adverse legacies" of his two predecessors at a time when Japan's politics is heading for sweeping changes. Part of their remarks was aired recently on Kudo's weekly commentary radio program, "ON THE WAY Journal."

The DPJ lacks the formalities and rules for managing itself as a governing party, according to Masuda. "The DPJ functioned very well as an opposition party, but its systems were far from satisfactory when it came to power," he said.

The DPJ has delayed important policy decisions in its day-to-day business as a ruling party, and even after a decision was made, some party members continued to comment like critics, Masuda said. The party has no framework for carrying out politics in a responsible manner once a decision is made.

The Cabinet must act as one, but Cabinet members sometimes speak inconsistently, Masuda said. The DPJ should establish basic rules for policymaking and only then should it improve its "manifesto" policy platform while showing how to finance the policies it pledged voters to implement, he said. 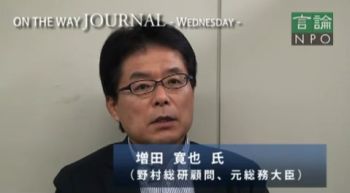 Masuda, who currently serves as an adviser to Nomura Research Institute Ltd., also said that the DPJ should call a national election as soon as possible to seek the people's verdict on its administration. The DPJ must do this, he said, because without listening to people's opinions, it became the most vocal critic of the head of government -- its party leader.

Each political party should refine its policy platform so that an election may be held at an appropriate time next year, he said. If this can be done, Japan is expected to restore a political cycle with which a change of power can be made involving ordinary people, Masuda said.

"Voters were simply optimistic two years ago that Japan would be better off only if the Liberal Democratic Party-led administration was ousted, but they are disappointed about the current situation after a lapse of two years," Miyauchi said. The DPJ administration has deviated far from the people's expectations, he said.

Japan's relations with the United States as its most important diplomatic policy area soured under the Hatoyama Cabinet while Kan as his successor clarified a lot of ambitious reform-minded policies, but many were fruitless suggestions, Miyauchi noted. Noda will have to recover these minus points from the past two years and then get the party back to even, but this will be very tough, he said.

"Voters may be satisfied with the DPJ if the new prime minister can score any good points without adding to the past negative points, but I feel this will be difficult," Miyauchi said.

Japan is in the process of moving toward a mature political system in which a change of power in the true sense of the term will be possible, Miyauchi said. "Prime Minister Noda must be fully aware of the reasons for the DPJ's failures in the past two years. So, I'm pinning my hopes on this point," he said.