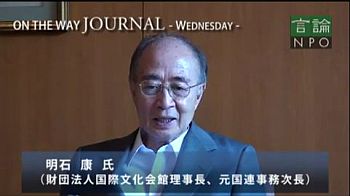 Akashi made these remarks during a recent interview by Genron NPO Representative Yasushi Kudo in summing up the outcomes of the 7th Beijing-Tokyo Forum, an annual meeting, which was held Aug. 21 and 22 in Beijing under the joint sponsorship of Genron NPO and China's state-run English-language daily newspaper, the China Daily. Akashi, a member of Genron NPO's Advisory Board, served as chief of the organizing committee for the 7th Beijing-Tokyo Forum.

The annual workshop has been held jointly by the two organizations every year since 2005, when Japan-China relations were at a critically low ebb. At this year's forum, about 100 high-caliber opinion leaders -- politicians, government officials, business executives, academicians and journalists -- from both countries attended. The two-day workshop drew an audience of about 1,000 people.

Akashi recalled that the Japan-China territorial row resurfaced over the arrest of a Chinese fishing boat captain after a Sept. 7, 2010, collision between his trawler and pursuing Japan Coast Guard patrol boats in Japanese territorial waters near the Japan-administered Senkaku Islands in the East China Sea, which China claims and calls the Diaoyu Islands. The latest row developed immediately after the 6th Tokyo-Beijing Forum, held in Tokyo.

According to Akashi's observations, the worsening Japan-China relations showed signs of improvement in the wake of the March 11 Great East Japan Earthquake. "Chinese public sentiment turned increasingly sympathetic toward Japan over the massive loss of life and damage caused by the megaquake and tsunami," Akashi said, adding that the Chinese people were also impressed by the Japanese people's presence of mind and resilience at the time of the national emergency.

"As the two geopolitical and neighboring powers in East Asia, relations between Japan and China are destined to embrace delicate and difficult elements. At the same time, the two countries are aware of their destiny to act in concert as members of the Asian community," Akashi observed.

"Our challenge is how to expand the positive side of our relations from realistic perspectives," he added. It is not easy for Japan, and probably for many other countries, to deal with China, which is emerging as a political, economic and military superpower in this part of the world, according to Akashi, but it is foolish and futile for both countries to brandish the sword of nationalism.

"I know it is not an easy task for Japan and China to deal with each other in a reasonable, non-emotional and objective manner. But we must do this so as never to repeat the past folly of walking the path to war," he stressed.

In this context, the Tokyo-Beijing Forum is unique in that Genron NPO, a non-profit organization, has been promoting dialogue with China, and politicians of ruling and opposition camps are participating in their private capacities, Akashi said.

"Private diplomacy is not new in the West and it is finally occurring in Asia. We should pursue private diplomacy between Japan and China, and among Japan, China and South Korea, or sometimes involve India and Southeast Asian nations as well," Akashi said.