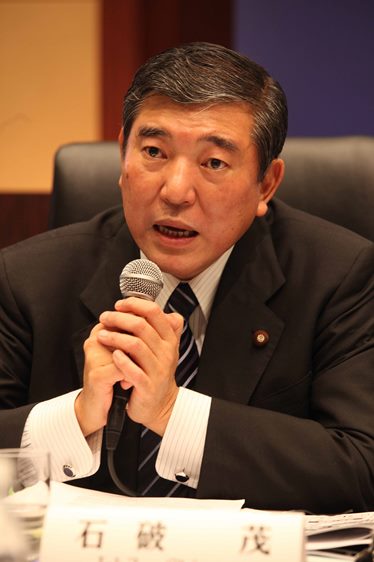 Shigeru Ishiba, chairman of the Policy Research Council of the main opposition Liberal Democratic Party (LDP), proposed that a sweeping realignment of political parties be the sole means to restore governance to Japanese politics.

In the event of the general election, those who can win a seat should create a new political party with those who share the same opinion on the issues of great significance to the country, according to Ishiba. "This is my ideal about political realignment that should be achieved through the hands of the people, although I know I am dreaming," he smiled.

Ishiba, formerly a minister of defense and a minister of agriculture, forestry and fisheries, made these remarks during an interview by Yasushi Kudo, Representative of The Genron NPO. The interview was aired on Dec. 1 during a weekly FM radio program, titled 'ON THE WAY Journal.' Kudo regularly appears on the program to comment on various issues.

Ishiba has this to say about why the Japanese people voted for the main opposition Democratic Party of Japan (DPJ) in last year's general election, putting an end to many decades of LDP's reign and bringing about a change of government: "Regrettably, they chose the DPJ as the substitute to the LDP, which they thought was failing their expectations, and not because they thought the DPJ was good."

"Now, the people are beginning to think that they have made a wrong choice and that the DPJ is much worse than the LDP, tempting them to return power to the LDP," he said. He thus described the current state of Japanese politics as being a 'negative selection' or 'negative competition."

If this is the case, is there no hope for changes in Japanese politics?

Ishiba is not completely pessimistic.

"The bottom line is whether we, politicians, have courage to speak the truth in public, at the risk of losing a Diet seat. Our ultimate goal is to change Japan, and we shouldn't care about losing a seat," he said.

Asked how many LDP Diet members are in the ranks of those who have the courage to do so, Ishiba's answer was "about 30 percent." He added that the same percentage would apply to their rival DPJ.

Now that Japan is in a national crisis in terms of foreign relations, national security and public finance, the National Diet members who share the same vision should come together, irrespective of party affiliation, and address the nation. We have no time to wait for a change of government, according to Ishiba.

Terming the latest change of government that gave birth to the DPJ government as "a great experiment that failed," Ishiba said the Japanese people now think it wrong to place "a man who has no thoughts about the country's diplomatic and national security policies" in the post of Japan's chief administrator, or prime minister.

Ishiba said it is not yet too late. "Japan's government bond prices are not yet plummeting, because people can still see a small ray of light (in the Japanese economy). The Japan-U.S. security treaty remains intact, as the United States still regards Japan as a useful partner. It is not yet too late for us to fix things."

- All excerpts of comments are translations from Japanese to English