My Trip to AmericaExperiencing the Power of Democracy 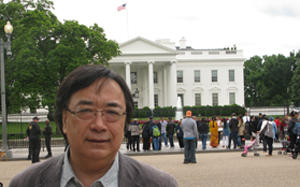 am now at the Dulles International Airport in Washington, waiting for my flight back to Japan after a month of meetings and discussions. We entered the United States on the 7th of May, headed towards New York on the 10th, and returned to Washington on the 14th. In the four days leading up to today, the 18th, we have met and spoken with around 50 individuals, including representatives from think tanks, foundations, members of Congress, scholars, and journalists.

During this trip, my initial desire was to explore issues concerning North Korea and peace in Northeast Asia - and I did. However, I also experienced tremendous changes and developments in the political scene during my time in America: James Comey's dismissal from his position as director of the FBI, suspicions that President Trump had revealed confidential information to Russian officials, and his attempts at shutting down all investigations pertaining to Russian interference... Just yesterday, a special counsel was named to investigate alleged ties between Russia and Trump's 2016 campaign election, which has been continuously reported as breaking news in various media. When I was dining at the hotel restaurant this morning, I could not help but notice other patrons, and even the employees, were poring over newspapers and actively discussing current events. All eyes are on the Trump administration, and I feel that Washington is going through a period of tremendous instability.

I have posed this question to many individuals: "Will the Trump administration manage to live out its first 4-year term?" Out of all the people I have asked, only one person answered in the affirmative. Even then, this individual's answer was not made without a hint of irony. Many believe that impeachment will occur before the administration hits the 4 year mark.

There was also the opinion that within the ranks of the GOP, many are starting to believe that Trump's vice president, Pence, is more capable of being a rational leader, and thus more suited to the presidency.

These answers were more than I'd anticipated for.

I visited the offices of the Wall Street Journal (the stock market plunged on this day) to exchange opinions with the leaders of the editorial department and TV commentators, where the possibilities of impeachment were brought up yet again. Some believed that impeachment was only a matter of time, but some insisted that things would become more difficult in that event.

On the other hand, individuals in charge of polling from the public opinion polling company Pew Research Center and Washington Post, as well as experts from the University of Maryland gave us details on the analysis of public opinions. They pointed out that while Trump certainly has his issues, the 40% who voted for him during the elections have not wavered in their support. This trend was also reflected in recent polls, which we discussed thoroughly. But the possibility of change is inherent in these numbers, as it remains to be seen what candidates will make of the current situation in the midterm elections next year.

During this meeting, I also expressed my concern on Trump's provocative stance towards North Korea, and the subsequent actions he might take. Many had no definite answer, saying that there is nothing to do but to consider the issue and take appropriate action.

The Strength of Democracy: Keeping the President in Check

I cannot say exactly what the future holds for us all, or how recent events will continue to unfold, but I feel that in the United States, opposition to the president and his inappropriate actions on the basis of democracy is starting to gain traction.

While engaging in discourse on such issues with American experts every day, I've had much to think about.

For instance, democracy is an institution that protects individual liberties. Even so, we, as citizens, may sometimes make the wrong choice. How do we keep the mistakes we have made in check? How do we conduct damage control? What mechanisms do we need, and how can we use democracy to help us?

In the United States, the judiciary, Congress, journalists, and even public opinion polls are beginning to serve as modes of opposition. But what about Japan? Can the rule of law and the structure of democracy be used as expressions of resistance? Do Japanese journalists and Japanese people have this power? And right now, when the very integrity of democracy is being questioned - is this perhaps a form of opposition? I believe that we have to encourage the mobilization of citizens, and utilize the many forms of democracy to create a better Japan.

An awareness of the transformation of democracy in the United States

We've had the opportunity to conduct numerous dialogues with individuals who work towards the promotion of democracy. Through these talks, I witnessed the beginnings of a movement, a movement of Americans who are starting to think about democracy seriously. There are people who believe that the United States has always been the driving force behind democratization, the center of the diffusion of democracy. I have always had a little bit of an issue with this condescending sort of worldview. Even so, while this point of view certainly still remains, I find that there are also people who are willing to think about the democratic problems facing many developed countries, including their own. These people have high expectations for cooperative opportunities with The Genron NPO. The Genron NPO was originally founded 15 years ago to strengthen Japanese democracy and realize the importance of debate. Even so, the idea of working cooperatively to create a space where we can tackle challenges to democracy head on has brought us to many places.

I'd visited Washington earlier this January when the Trump administration was still in its infancy. At that time, there was no such awareness amongst American think tanks and universities. But now, in the midst of this political instability, there have been calls for movements to restore democracy. Here, I believe that while questioning the integrity of democratic institutions in Japan, we should work cooperatively to protect democracy with the United States, as well as the rest of the world.

We had the opportunity to discuss the North Korean threat during our visit, and I've had a lot to think on the matter. I've thought hard about the possible ways in which this issue will continue to develop, and here I would like to introduce a few answers that were presented to me. First, the option of strengthening sanctions and strategically utilizing diplomatic approaches to force cooperation. Second, the mobilization of military operations. Third, simply doing nothing. And lastly, recognizing North Korea as a nuclear state. This last option may seem surprising, but it was acknowledged that all of these four options are not completely impossible.

At this point, the North Korean threat is still a problem that is far from the minds of the American public, a problem that is happening in the far-off continent of Asia, happening to people they know nothing about. Even so, America is beginning to realize that if the Trump administration lives through its four-year term, there will be a time when a momentous decision regarding North Korea has to be made.

However, more than the possibility of this future threat, the democratic issues rooted in the Trump administration surely weighs much more heavily on their minds. As such, I strongly believe that we have to come to grips with the troubles facing democracy and peace through the strength of debate.

From all the individuals I've had the chance to speak to in the United States, I've come to understand that they have high expectations for the future of Japan-U.S. relations, and that they are interested in the annual Japan-U.S. Dialogue that The Genron NPO will soon be working on. At this point, we are also looking into possible collaborative opportunities with a number of different organizations.

The conclusion of my time abroad in 4 different countries, and a renewal of determination.

This time around, I got to attend a gala party organized by an American organization for the very first time. I was moved when I heard politicians speak in ways that reflected their accountability to their constituents, and also when I realized that there are politicians who feel responsible for the Asia Pacific. I had the chance to exchange words with these individuals, and relayed to them the role that The Genron NPO hopes to play in the future.

From these experiences, I have come to understand that the key to problem-solving is an adequate amount of tension and cooperation between the government and the people it governs. My resolve to foster such productive relationships in Japan has been renewed.

From Beijing to Berlin to Jakarta, and then making rounds between Washington and New York, I have had the opportunity to engage in many discussions. I feel that this journey has been meaningful, a journey that has given us lots of strength, and options for future endeavours. I will hold this experience close to me as I return to Japan. Moving forward, I will carefully consider how to apply the lessons I've learned on my trip abroad, and put them to practical use.

When I get back to Tokyo, I wish to continue my inquiries and come up with new proposals for our shared future. This has been Kudo, reporting from the Dulles International Airport.