Kudo's Blog;Thoughts from Germany: Japan and Germany, which have cultivated democracy after losing the Second World War, and their roles in a destabilizing world 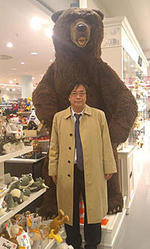 This is Kudo from the Genron NPO, writing from Berlin. For the past two days, I've been busy discussing with officials from top German think tanks, economists, and politicians, especially those specializing in foreign policy.

One of the reasons I'm here in Germany now is to take part in a dialogue between the Junior Chamber International-Japan (JCI) and JCI-Germany as a panelist. JCI has changed the name of their international department to civil diplomacy after The Genron NPO's program, and has spoken of their desire to engage in global issues on the public level. As this is also the Genron NPO's mission, I have come to give my full support.

Discussing the essence of democracy

Democracy was brought up as a central issue during the dialogue. We exchanged opinions about the forms of democracy. For instance, the system that uses national elections as a base that reflects the opinions of civilians directly, or one that uses elections to elect representatives. On top of that, we discussed the ways we should think about the speed of decision-making in democracy. During this debate, I expressed that this speed should be thought of separately from the problem of democracy, and should be considered an issue of governance. In order for the democratic political system to serve as an effective form of governance, and to hasten the speed of decision-making, we must empower the core components of democracy, such as party politics and citizens. The flaws of democracy have resulted in a growing distrust in the system. This should be addressed by strengthening democratic institutions, not by giving up on the democratic decision-making process.

Additionally, I mentioned that democracy should not become a "tyranny of the majority," where a victor is elected by amassing large numbers of supporters. Representative democracy is developed to reflect opinions of the minority, as well as that of the majority in the deliberative process. I also brought up the three branches of government as a basis for the structure of checks and balances. I posed these topics as a question, and among the young German business officials present, there was much mutual agreement. This was a highly interesting and meaningful experience for me.

Japan and Germany, both nations with beginnings in defeat at the end of the Second World War, are not only currently in similar situations, but also have shared interests in the problems facing the norms of liberty and democracy. Once again, I have realized that it is now time for us to join hands and work together.

Germany's grand coalition as an anomaly

When I was discussing with representatives from think tanks, the issue of democracy repeatedly came up as their central concern. I learned that many intellectuals in Germany are nervous about the French presidential election coming up ahead. There were people who were worried that two of the anti-EU extremist candidates (Le Pen on the far right, and Mélenchon on the far left) would manage to make it to the run-off, but this did not happen. Even so, France, which can even be thought of as the birthplace of modern democracy, is experiencing a weakening of its democratic institutions, and party politics itself is beginning to lose the public's trust. Now, we are in the midst of a situation where the emergence of the populist movement cannot be ignored. Even in Germany, where the political process is relatively stable with strong democratic foundations, the intellectual class has felt its impact, and is actively coming up with ways to deal with the problem. Essentially, many people in German believe that the fragility of democracy is a critical issue that must be addressed immediately.

In the years after 2015, when the refugee problem became much more severe in Germany, the Alternative for Germany (AfD) rapidly gained support. The rise of this right-wing populist party was a major concern for many in Germany. Even so, once the refugee policy was put in place, and the panic that arose with the massive influx of a million refugees had quietened, support for the AfD began to decrease.

However, I've heard something rather interesting. Currently, the Christian Democratic Union (CDU), the Christian Social Union in Bavaria (CSU), and the center-left Social Democratic Party of Germany make up a grand coalition in Germany. Even if you look at the approval ratings, as long as this coalition keeps thriving, politics will continue to stabilize - or so it seems from the outside looking in. Won't the results of the elections this September be stable? This was my question. To my surprise, many German politicians had wildly differing opinions. I learned that essentially, a grand coalition government itself is an abnormal state of affairs. Originally, democracy would involve a ruling party and an opposition with just the right amount of tension. In the midst of that, parties that actually share the same policies and missions may form a coalition - this is the way it should be. This is what I've heard from the individuals who will continue to shape German politics.

I believe this way of thinking also has large implications for Japan. Instead of utilizing coalitions as a means to broaden one's power base, using it to work on policy prescriptions and problem-solving based on respective ideologies and solutions that follow from such beliefs, and gaining public support... at least this sort of thinking has not been distorted in Germany. This is why the grand coalition in Germany appears inappropriate. The results of the September elections may once again end with two political parties forming a grand coalition, but after hearing that there are currently many movements turning away from the grand coalition and exploring possibilities for smaller coalitions in party politics, I was a little relieved.

The fragility of democracy in Europe is a top concern in Germany. Officials from German think tanks were particularly worried about democracy in France. In French politics, the foundational principle and very definition of the twin pairs of liberalism and conservatism have been coming into question. Essentially, it has become difficult to understand what kinds of beliefs a political party was founded on, and what kinds of policies they will then enact. In the midst of this fundamental confusion, there has been a movement of political support shifting from established political parties to individuals who seek to challenge the status quo. Germany has yet to experience this situation, but from all of the people I spoke to, not a single one had full confidence that it will absolutely not occur in the near future.

At this point, there has not been any charismatic populist emerging onto the German political scene, upheaving political order and rapidly gaining support. Even so, supporters of the Social Democratic Party of Germany, the Christian Democratic Union, and the Christian Social Union in Bavaria are on a steady decline. I was told that many factors are causing shifts in political allegiances and popular support for all political parties.

At this point, we began a very in-depth conversation on the issue of populism. There are politicians who pander to societal unrest. Although there are many ways to address the issues causing this sense of uneasiness, this phenomenon that appeals to and incites people's emotions does exist to pursue a certain political agenda. The individuals I spoke to are concerned with this movement, which has been spreading all over Europe. Many people are doubtful that parliamentary systems and journalists have the capability to suppress this wave of populism. When asked if parliamentary institutions and the role of journalism will have persuasive power over public opinion shaped by heightened emotions, there was barely anyone who could confidently answer in the affirmative. In many forms of media, including SNS, fake news has been spreading like wildfire. Because false information have been picked up by existing mainstream media, it has become difficult to tell if the truth is being reported. Populism is rooted in this chain of events.

For two days, from day till night, I have been involved in discussions with individuals including German politicians and representatives from German think tanks. From these discussions, I came to realize that problems facing democracy in Germany are being taken seriously. These individuals all have the same things to say about the Genron NPO, and that is that we have a certain appeal that is not found in Germany.

In response, I asked them what that appeal was, for their words were not simply made out of courtesy, but one that came up in the middle of a rather robust discussion. It turns out that they were drawn by the fact that the Genron NPO was founded on the basis of strengthening democracy in Japan. In other words, to evaluate the results and effects of policies enacted by the current administration, and conduct assessments of party platforms. According to these individuals, in Germany, there is no think tank that does the type of work that we engage in, i.e. re-thinking democracy, and coming to grips with issues concerning foreign diplomacy, national security, and the world order. In fact, officials from two think tanks jokingly suggested that the Genron NPO should evaluate Chancellor Merkel, while they assess the Abe administration's performance. I immediately declined. This is because at Genron NPO, we strongly believe that we should be responsible for democracy in our own nation. To carry out this responsibility, we attempt to empower our citizens, and work towards resolving problems in our society. And now, the endeavors of Genron NPO have transcended national borders, looking towards Asia and the rest of the world.

When such movements are born all over the world, and when our fellow think tanks combine forces, I truly believe that we can work towards bettering a hyper-globalized word, and building a new world order with liberty and democracy at its roots.

Many organizations have expressed their interest in cooperating with the Genron NPO. At the same time, I have come to the realization that Japan and Germany are facing the same issues. Stuck in a destabilizing international order, knowing we cannot just rely on the United States, this uneasiness is only going to continue festering. In the middle of all this, I am once again reminded that Japan and Germany both have very important roles to play.

I'm grateful for the opportunity to speak with so many individuals here in Germany. Berlin is a beautiful city with lush greenery, and the weather reminds me of Japan in early summer. When I heard that Berlin is known as the city of bears (my favorite animal), I frantically rushed into a department store and ended up purchasing five stuffed bear toys. This is a photo from that episode. I must return to Japan now, but I hope to have more opportunities to build cooperative relationships in various shapes and forms.

I've managed to compile this report in one sitting. Now I will be heading towards the airport, and back to Japan. After that, I will leave immediately for Indonesia, where there will be a conference between officials from Indonesia, Malaysia, Singapore, the Philippines, and Japan, where the state of democracy in Southeast Asia will be discussed. Once that is over, I am scheduled to leave for Washington.

The international world order, democracy, peace in Northeast Asia, and rising tensions over North Korea... In the midst of all of this, what can the Genron NPO do? In what ways should we join forces with people over the world, and how should we tackle these problems facing Asia and the rest of the world? I will continue my search for these answers, and continue reporting my findings to everyone.

This has been Kudo, reporting from Berlin.