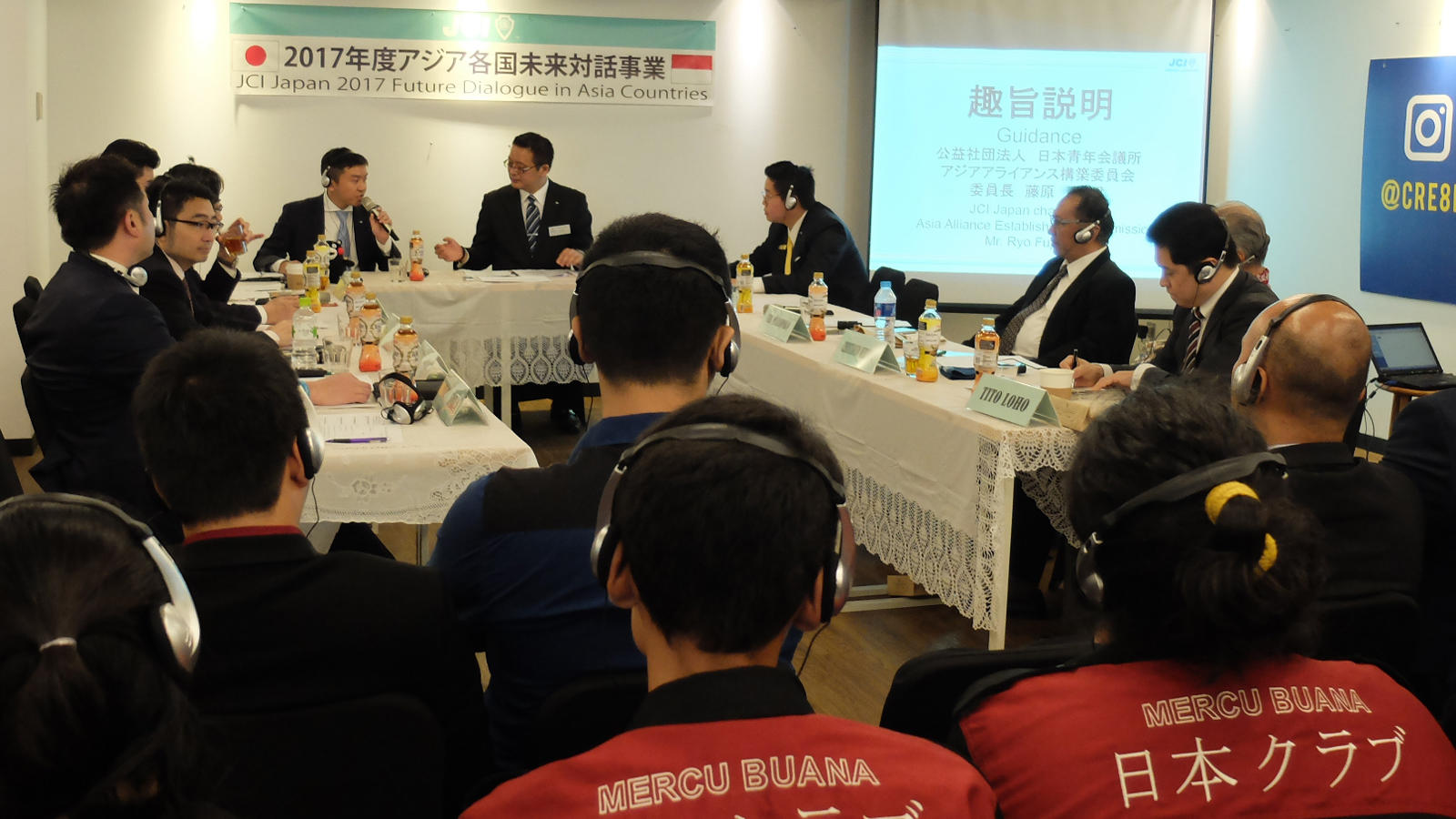 Reflecting on my visit to Indonesia;Towards Solving the Problems of Democracy in Asia

This is Kudo from the Genron NPO. I've just completed my schedule in Indonesia, and will be heading to Washington next. The dialogue on democracy in Indonesia has been an incredible learning experience for me.

The Future Dialogue and its Large Potential

First, let me talk about the Future Dialogue, a series of open public-level dialogues organized by the Junior Chamber International (JCI). I feel that this event has enormous potential. Many of the individuals present thought seriously about the problems of democracy and globalization (including the positions Japan and Indonesia have on this phenomenon.) The people of Jakarta had high expectations for the development of democracy after their elections. When they were rethinking their political situation in the context of developments happening in the world today, I could see that they were putting a lot of hard work into spreading the practice of Indonesian democracy.

I came to join the debate between young business leaders as a referee, and I learned that there may be a possibility for young Japanese and Indonesian leaders to join the discussion for the future of democracy. Even if our countries are on different stages of development, we have the same respect for democracy and liberty, as well as a strong will to change our countries for the better. I think it would be meaningful for Japan and Indonesia to join hands, not just for the present and future of Asia, but also for the establishment of peace.

In the midst of all of the discourse at the event, there was much sentiment in favour of increasing Japan-Indonesia exchanges, and collaborating to address issues. I was very surprised by this. Many people, not just experts, have perceived a change in our times and the future of democracy, and there was much approval on the idea of establishing a new Asia and closer bilateral ties. I wish to offer my full support for the mobilization of these movements.

Democracy in Asia at the Crossroads

The next day, as part of a project by The Genron NPO, I took part in an 8 hour discussion on democracy, which involved representatives from 5 countries: Malaysia, Singapore, the Philippines, Indonesia, and Japan. We had a meaningful debate on defining democracy, the future of democracy in Asia, as well as matters concerning increasing the speed of decision-making in the midst of globalization.

I took part in this discussion as a moderator, and felt that democracy in Asia is coming to a crossroads. This is because while many countries in Asia, like Japan and Indonesia, have the desire to further develop democracy, there is still a strong need to recognize citizens as the bearers of democracy. There is also a lack of political will to promote democratization as it entails the destruction of entrenched interests in the social system.

For instance, in regards to Singapore, I'd bluntly brought up a rather unkind question: is it not contradictory for Singapore, which is making profit in a globalizing world through free trade, to have its politics governed by an authoritarian system, instead of one shaped by liberalism and democracy? Isn't Trump becoming the president of the United States an ideal turn of events for Singapore? In response, the people in attendance gave rather hesitant answers, calling it a delicate matter while citing ethnic tensions surrounding the region.

The Rise of Extreme Islamic beliefs

I also debated with the Indonesian representatives. Indonesia has a stronger fixation on problems concerning democracy - more so than Japan - and there were high expectations for the development of democracy by the next generation. However, it has come to my knowledge that they are facing a rather severe problem. In the gubernatorial election of Jakarta, the former governor had 75% of the residents' support. However, in the face of his blasphemous remarks towards Islam, he lost the election. In the first place, he is a Christian of Chinese ethnicity, a testament to the diversity of the nation, and was very much expected to be the next leader of Indonesia, the successor to President Joko.

It is said that this candidate incited the rage of Muslims with his statements during the campaign, but a little research brings more information to light. Apparently, it was the work of Muslim extremists who are convinced that a return to fundamentalism is necessary in the face of diversification brought by globalization. In an attempt to pursue the interests of a particular transnational Islamic group in Southeast Asia, these individuals have cherry-picked parts of the candidate's statement, and turned it into a heated point of debate.

Indonesia is striving to be a democratic nation that recognizes diversity in the midst of globalization. However, according to the Indonesian intellectuals, terrorists and extreme Islamists have become one of the factors holding them back from further progress.

Born from the anxiety and anger of the people - President Duterte

President Duterte has the enthusiastic support of many Filipinos. When we were discussing issues concerning the killing of suspects through illegal means, and the infringement of citizens' rights, many of the participants from the Philippines shared their sentiments on the topic. They expressed their desire to change the situation, and said that it is unforgivable. Even so, with the emergence of multinational corporations onto the market (which are connected to powerful, influential individuals), the wealth disparity is widening, and democratic problem-solving has become difficult. The Filipino participants acknowledged that the resulting anxiety and anger of the people precipitated an undemocratic, extreme leader.

If you think about it, Thailand is in the same situation. While it is a country where democratization has taken root, people soundly reject regime changes when it concerns their personal interests. The movements of democratization will promote political participation from various demographics, but when governing functions are unable to unify, people will come to rely on the military. This really is an example where democracy was unable to be capitalized to its fullest.

At this conference, it became clear that many countries in Asia are having trouble utilizing democracy to its fullest.

Even so, I have felt a certain kind of reaction while discussing with the individuals at this meeting. That is because I have managed to share this one point with representatives from all 5 countries: if the public is not empowered, democracy remains frail, and at times may completely crumble. I was told that the problem of democracy that many Asian countries are facing, as mentioned earlier, is that the growth of democracy depends on how much its citizens understand and actively work for it. If the development of democracy does not grow in the direction of a stable civil society involved in problem-solving, that nation will move backwards. Democracy is weak, and to strengthen it, we have to take matters of problem-solving into our own hands. To able to reaffirm this sentiment once more with the other participants was a great achievement.

The Guarantee of Personal Liberties is the Aim of Democracy

On the other hand, there is a problem in Asia where democracy is withering away in the name of economic development and governance. Of course, it is true that while a society has not matured, a sovereign nation cannot move towards solving issues without a solid and stable system of governance. Because of that, the idea that various forms of governance and political systems may be needed must be recognized. However, I pressed on with my questions. The goal of democracy is to guarantee personal liberties, and this is one of the treasures of the human race - should we not think of this personal freedom as a milestone in the progress of humanity? At this point, many participants remained silent. Even so, this really is a matter of democracy being questioned, a major point in the long history of the human race. Asia has yet to reach the halfway mark of this milestone, and I think it is time for us to seriously consider how to make the best use of democracy within Asia.

Towards the Asia Opinion Leaders' Dialogue in Tokyo

The Asia Opinion Leaders' Dialogue began with the aim to discuss issues that fall under the umbrella of democracy with representatives from countries all over Asia. The second conference was just held here in Jakarta, and it has been decided that the next one will be held in Tokyo either this August or September. Once again, I have come to the keen realization that we are all in a situation where we cannot turn a blind eye to the problems concerning the progress of globalization, the development of democracy, and religion. I may be repeating myself at this point, but I will now head to Washington, carrying these feelings close to me. I will be back with another report, so please kindly look forward to it.