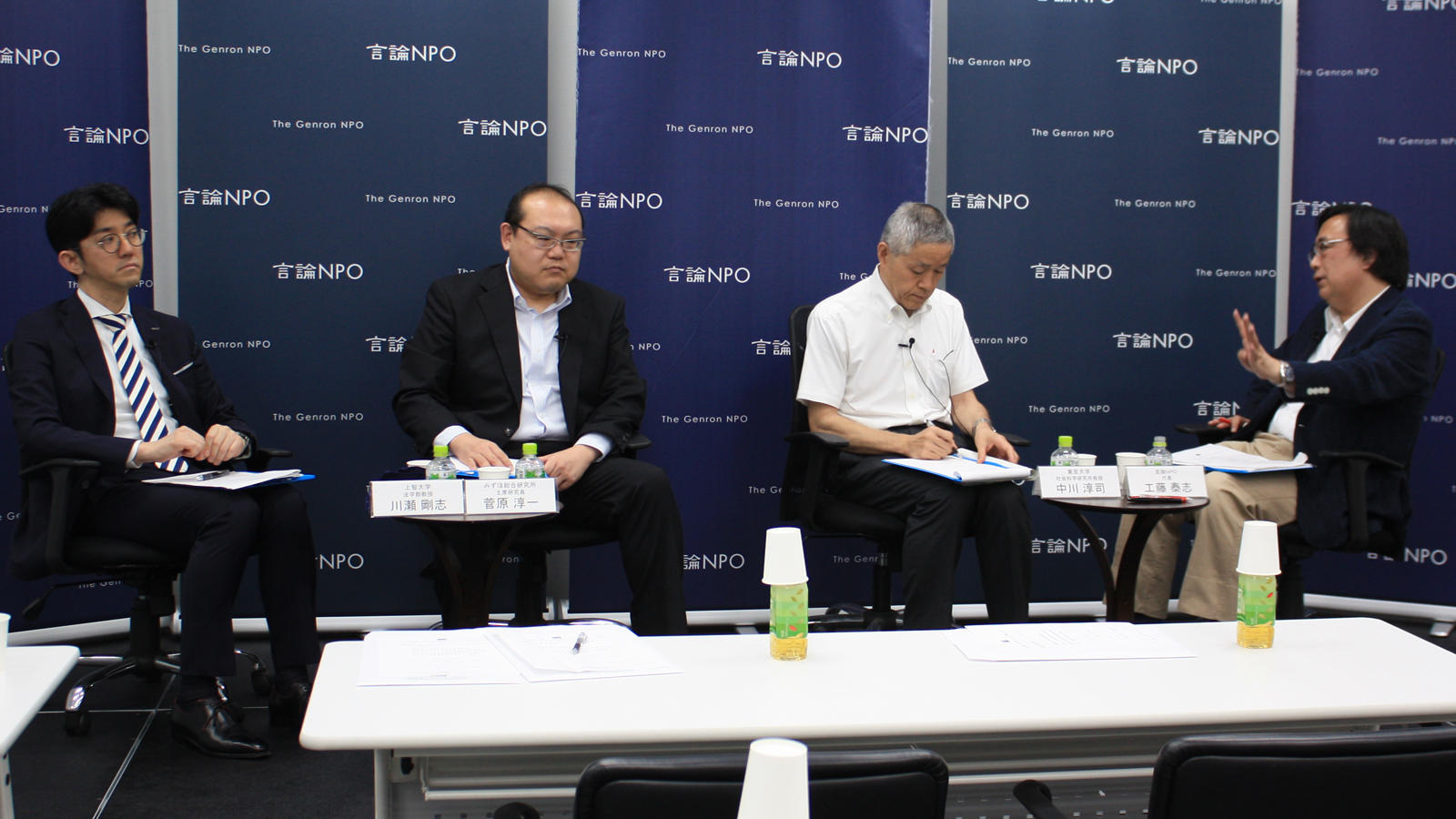 Promoting global trade is one of the important agendas at the G20 summit convening July 7-8 in Hamburg, Germany. Global efforts to establish free trade are at a crossroads, with U.S. President Donald Trump pulling out of the Trans-Pacific Partnership (TPP) and trying to renegotiate the North American Free Trade Agreement (NAFTA). During this year's annual Group of Seven meeting, Trump expressed his reluctance to world leaders - although he eventually backed down - to have the G-7's final communique include a pledge to fight protectionism. During an open discussion organized in June by The Genron NPO, experts on trade exchanged views on the impact of Trump's protectionist policies on the future of global free trade.

In his overview of global trade, Junji Nakagawa, a professor at the University of Tokyo's Institute of Social Science, said that the world is facing a period of grave uncertainty as Trump turns his back on decades of efforts to achieve global free trade since the Bretton Woods system was put in place in the mid-20th century. "The United States had sought to work around the WTO (World Trade Organization) framework, and had been taking a restrained stance on using sanctions as a weapon in trade disputes. But now such restraint may disappear and the United States may start to impose one-sided trade pressure like the times before the WTO," Nakagawa said.

Tsuyoshi Kawase, a professor at Sophia University's Faculty of Law, added that even during the Obama administration the United States had been disappointed with the way the WTO settled disputes, and a Trump administration decision to completely ignore WTO decisions would be a serious threat to free trade.

Course of global free trade to be decided in months

Junichi Sugawara, a senior research officer at Mizuho Research Institute, said while the Trump administration hasn't unveiled any very concrete protectionist policies other than withdrawing from the TPP, there are several key events we need to watch to determine how far the new administration will threaten free trade. In March, Trump signed an executive order to conduct a comprehensive review of U.S. trade deficits by the end of June. And instead of appealing to the WTO, Trump ordered a trade probe against China and other exporters of cheap steel into the U.S. market under Section 232 of the Trade Expansion Act of 1962, which allows the president to impose restrictions on imports for reasons of national security. Furthermore, the NAFTA renegotiations will start this summer. "The next few weeks will be critical as to whether President Trump will truly launch protectionist policies," Sugawara said.

"Having passed its first 100 days, the Trump administration needs to start showing results, and it will likely focus on trade where it is easy to pressure other countries and seek immediate results," Sugawara added. "If that turns out to be the case, the United States may start making very strong demands for market access and moves against what the U.S. feels are unfair trade practices." He said Trump believes the United States is the world's largest consumer and importer, and any country that retaliates will merely hurt itself and not the United States.

Addressing the negative impacts of globalization

The discussion moved on to how to address the problems caused by globalization such as job losses. Nakagawa said that free trade is about increasing the size of the "economic pie" and how that pie is distributed within a nation is a matter of domestic policy, including how to care for those who are unable to reap the rewards of free trade. The Trade Adjustment Assistance (TAA) program, which provides a path for employment growth and opportunities through aid to U.S. workers who have lost their jobs as a result of foreign trade, has been in place for about 50 years, but is apparently not good enough, he said. It is the responsibility of the governments of each nation to increase support and provide a safety net in their respective countries. "But Trump is blaming the 'other country' for matters that lie within the responsibility of the respective governments and is, in essence, trying to move away completely from free trade," Nakagawa said.

Meanwhile, Sugawara noted that international organizations and gatherings such as the G-7, G-20, the Organization for Economic Cooperation and Development and the International Monetary Fund, as well as the WTO, are making sure to include "inclusive growth" as one of their key terms in their discussions, indicating that increasing measures to address the "people who have been left behind" as a result of the growing economic pie is becoming a global trend.

Sugawara introduced the recent debate in international circles over whether Trump winning the White House is in fact the cause or the result of this confusion. If Trump was the cause of the protectionist moves, then the matter will be solved when a different president is elected. But many people see Trump as a result of the different problems that have emerged not only in the United States but in global society. "The international organizations that have supported the Bretton Woods system in particular are very concerned about how trust of globalization and free trade is waning," he said.

Asked about Japan, Kawase said the situation in Japan is not as bad because it has social welfare, unemployment insurance and a well-developed social security system, compared to the United States where the level of social welfare provisions is the lowest among advanced nations.

What kind of trade strategy is right for Japan?

In the final session, the experts discussed the kind of trade strategy that Japan needs. Nakagawa said Japan is involved in various free-trade negotiations such as the TPP and the Regional Comprehensive Economic Partnership (RCEP), and it is time to take the initiative in building a global free-trade order. Sugawara agreed with Nakagawa, noting that with the establishment of the TPP and RCEP, export companies from the United States, which does not belong to these agreements, will be at a disadvantage when trying to enter the Japanese and other Asian markets. That may eventually give rise to voices within the United States to pressure Washington to return to the TPP, he said.

Sugawara further warned that if Japan agrees to a better bilateral deal with the United States than within the TPP framework, it may encourage the United States to take similar bilateral approaches with Vietnam and Malaysia, and further make it turn its back on international schemes. Washington may take a tough stance toward Tokyo over trade in the coming months, but now is the time for Japan to stand firm and fight for global free trade, the experts said.

"Ultimately, the only thing that Japan can do is to simply continue with the negotiations," Kawase said. He saw reasons for optimism, such as in the moves of Vietnam, which was initially reluctant to see a TPP without the United States, being convinced by Japan to become more positive toward the regional trade order. Japan also fought back during RCEP talks against some countries who tried to seek an easy deal, arguing for a more comprehensive agreement on a higher level. "The rules of the 20th-century-ish WTO are gradually becoming outdated, as seen in how it is unable to keep up with the current state of multinational manufacturing. What brings the schemes up to date is the TPP," Kawase said.

Asked about the future of the free-trade system, Nakagawa described a worst-case scenario where protectionism spreads globally like a disease if Trump continues with his protectionist trade policies. The world may repeat history, where shrinking global trade in the 1930s became an indirect cause of World War II. In order to prevent such a scenario, Sugawara stressed the importance of "inclusive growth" where free trade continues to increase the size of the economic pie while governments come up with domestic policies that make sure a good slice of the pie reaches everybody.

Kawase called for the WTO to step in to avoid the worst-case scenario, such as when the world was facing a global financial crisis in 2008-2009 and the organization, then under Director-General Pascal Lamy, published a semiannual report monitoring the protectionist moves of member countries. Kawase also called for the Japanese government to become more active within the WTO by taking a stand against protectionism and seeking resolution of disputes within the international framework. The two other experts concurred, saying existing rules like the WTO are not something to be taken for granted like air and water, but that it is a system that needs to be protected with a conscious effort.