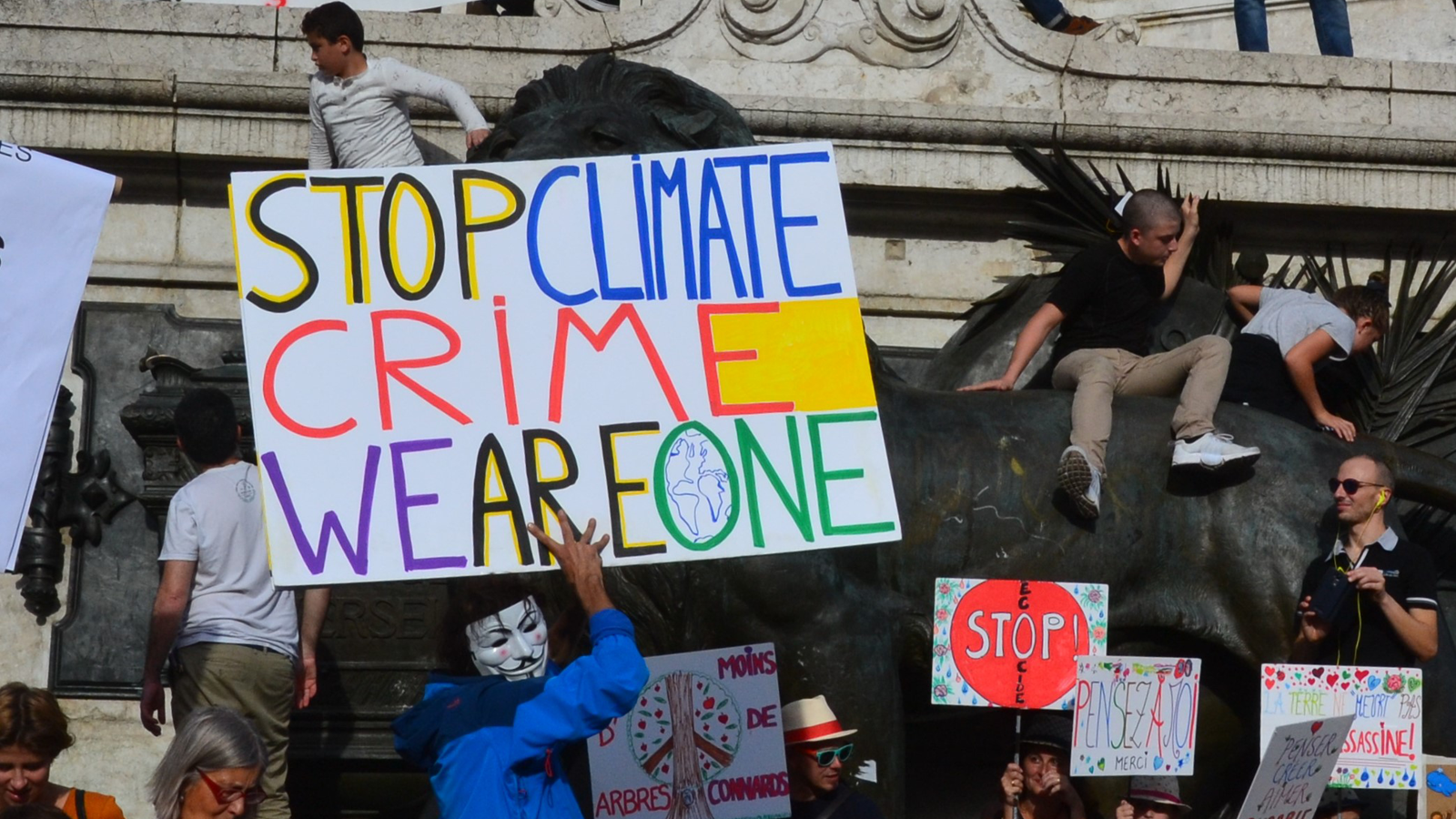 On October 16, 2019, Genron NPO held its World Agenda Studio, a regular forum for Japanese opinion formation on global issues. This event dealt with the question, "Will climate change countermeasures be implemented in time?"

Three panelists took part, including Seita Emori, Deputy Director of the Center for Global Environmental Research at the National Institute for Environmental Studies. They discussed their shared belief that current conditions make it impossible to meet the Paris Agreement target of keeping global warming since the industrial revolution under 1.5°, and that in order to keep climate change in check, it is essential to ensure that the potentially increasing public worry about the issue leads to concrete action.

Emori was joined on stage by Naoki Matsuo, Senior Researcher at the Institute for Global Environmental Strategies, and Yuya Nishiyama, Manager at GR Japan, a public policy consulting firm.

Japan and the World: The difference in commitment, both public and political

Genron NPO President Yasushi Kudo chaired the forum, and began the discussion by noting the great amount of attention given to powerful warnings about climate change issues made individuals such as UN Secretary-General António Guterres and 16-year-old Swedish environmental activist Greta Thunberg, at the United Nations General Assembly in September, and at the UN Climate Action Summit. Kudo asked the three panelists, "How should we react to the historically high levels of worry about climate change around the world?"

Emori was involved with the drafting of an urgent statement issued on September 19 by the Science Council of Japan, delineating the need for rapid transformation to a new economic and social system to protect future generations by, for example, bringing global CO2 levels to zero by mid-century. Emori explained the intention behind that statement, i.e. that it should be taken with the same sort of urgency as the emergency warnings for people to move themselves to safety issued by the Ministry of the Environment when the recent Typhoon Hagibis made landfall in Japan. He expressed his concern that the sense of crisis felt by experts has not been sufficiently communicated to the public, saying, "Climate change experts believe that decarbonization must be achieved as quickly as possible, but the majority of people have never even heard the term 'decarbonization' before."

Matsuo stated his belief that the implementation of measures to counter climate change is too slow, in both Japan and around the world.

"CO2 emissions have not yet peaked, and they may increase if ignored. Right now, we face the challenge of reversing that trend and reducing emissions. This questions the very essence of modern civilization, and if left unconsidered, we can do nothing but hope for the best," he said.

Nishiyama described how Greta Thunberg called for a world-wide student strike, and seven million people took part, but in Japan, only a few thousand participated. He explained the reason for this difference, stating, "This shows that there is still indecision and a lack of understanding in Japan. Another problem is that adults did not give the students an environment in which they could feel as if they should take part."

Nishiyama indicated that the lack of awareness of the crisis being faced can also be seen at the government level. He referred to when Japan's Minister of the Environment Shinjiro Koizumi speaking before the UN this past September, but had no answers prepared regarding what concrete measures Japan is implementing to reduce CO2 or to reduce Japan's reliance on thermal power generation. Moreover, after the climate action summit, while 77 countries set a goal of reaching zero carbon emissions by 2050, Japan has yet to make any move towards raising their emissions reduction target.

According to Nishiyama, this sort of apparent lack of political action is contributing to the increased worry among the public.

After listening to the somewhat pessimistic interpretation of the current situation provided by the three panelists, Kudo asked whether the 1.5°C goal is achievable with the situation as it is, and whether or not it is now time for scholars and experts to make a genuine effort to explain to the public what is happening.
Matsuo declared that, "Scientifically speaking, what is now clear is that it is absolutely impossible using current measures alone. The Paris Agreement stipulates that each country will submit and update its emissions reduction goals every five years for mutual review under the existing framework. However, the attempt to make those targets legally binding during the Copenhagen Conference in 2009 failed. In fact, assuming the current goals of every country are reached, climate models show that the temperature increase will not even be kept under 2°C. Even stricter targets are needed, and they must be met. Whether the Paris Agreement will function properly or not depends on future effort."

Emori also discussed the significance of the temperature target, asserting that, "It's not a question of things being okay if the temperature increase is kept under 1.5°C. When the average global temperature exceeds a certain level, we will end up with a global chain reaction of events such as the forest fires in the Amazon earlier this year, and it will be beyond our ability to stop it. This has been pointed out in numerous scientific papers, but we don't know how high the temperature can rise before this occurs."

Emori further explained that the target value outlined in the Paris Agreement, "does not claim that staying under 1.5°C is safe. It's based upon the fact that even a one-degree rise has already resulted in shockingly abnormal weather. A 1.5°C increase will make things even worse, so we have to do something to keep the increase under that new target."

Nishiyama expressed his opinion that, "If it is impossible, it's only impossible in terms of the current thinking, so we must change that way of thinking itself. For example, slavery used to be an accepted concept, but at one point, people began to think that a slavery-free society was more normal."

In that way, Nishiyama emphasized, success in meeting temperature targets will depend on making a change to public awareness about the idea that non-CO2-emitting energy is more natural, and that change must be made as soon as possible.

Kudo returned the discussion to the idea of public awareness by presenting some public survey data being collected by Genron, which found that only 2.4% of Japanese respondents feel that reaching the Paris Agreement target "is possible." In addition, 31.5% feel that it will be "impossible with current efforts," and 22.3% responded that "We're already in the crisis management stage."

"A large proportion of the public is directly dealing with the increased strength of typhoons and other abnormal weather, and is thinking that something odd is potentially going on," Kudo said. "However, that has not led to any specific movements in policy implementation."

Kudo asked the three panelists what must be done to achieve the 1.5°C target.

Nishiyama has experience working at the former Ministry of Transport and at the Ministry of Economy, Trade and Industry, and in those ministries, he learned the importance of public opinion.

"National civil servants serve the entire country but find it difficult to formulate policies that impact specific industries. Making such decisions is the work of politicians, and it is the voice of the people that drives politics, " he explained.

In concrete terms, Nishiyama pointed to the Genron survey data showing that 6.8% of people think that priority should be given to responsible consumption and production, one of the UN's Sustainable Development Goals (SDG). He pointed why this is a problem.

"There is little awareness among consumers that they can influence the CO2 reduction efforts by choosing products made using methods that emit less CO2. Also, there is little media attention given to how changing their own behavior can help reduce emissions."

Moreover, Nishiyama noted, "In countries where reusable energy is prevalent, there is a deep public understanding regarding the initial cost increases that accompany the introduction of such forms of energy production. However, Japanese electricity production policies are aimed only at ensuring low prices. Economic efficiency concerns only address those low prices, and discard any consideration for environmental impact."

He urged increased public awareness that the adverse effects of climate change on economies should be a broader part of economic efficiency considerations.
Matsuo noted that in order to promote emissions reduction efforts, drastic efforts are needed to ensure people have a sense of the crisis the world faces in the future due to climate change; they must think about what society will look like in 2050. Consumption patterns must naturally be reviewed, but economic guidance can be given on the supply side as well through the implementation of carbon taxes and other economic deceleration efforts. Matsuo also stressed the necessity of moving towards the construction of a framework in which the societal cost of CO2 emissions is added to the economic cost.

Towards the end of the discussion, Kudo asked the panelists what Japan should do to avoid the catastrophe that climate change will bring about.

Nishiyama presented four points that he believes the government should be considering. First is the implementation of goal-based policy planning calculated upon how much emissions should be reduced rather than allowing them to build. Second is the implementation of evidence-based policy planning that utilizes statistical data to determine which policies are effective and what effects have been achieved. Third is the design of scenarios that are not based upon wishful thinking but face inconvenient facts head on. Fourth, Nishiyama explained that there needs to be risk management in the form of implementing early measures to counteract serious risks.

Nishiyama also called for more direct effort to be made towards internalizing poor external economics that accompany CO2 emissions.

Matsuo stated that the most effective measure will be for politicians and the government to show what Japan will look like in 2050. Only when there is a vision to, for example, "resolve global warming with Japanese technology," will people be able to take concrete action to achieve that shared vision.

Kudo pointed out that the government's Strategic Energy Plan does not touch upon energy policies post-2030, and that Japan's plan to increase the number of coal-fired power plants is not in consistent with the Paris Agreement's goal of reducing CO2 emissions by 80% by 2050.

He called on the government to, "provide a clear vision, and explain it to the public."

Emori believes that in terms of broadening public understanding of what is happening right now, what is most important is to, "take events like the recent Typhoon Hagibis. Of course, disaster response is an important part of the conversation, but it shouldn't end there. It can also be an opportunity to think about climate change."

Emori also pointed out that in terms of corporate change, "There is great concern in Japan about the future of the economy, and there will be no progress in decarbonization unless companies can see the potential profit in a decarbonized world."

In order to change this way of thinking, "Decarbonization will have to move rapidly, with steelmakers transforming into general materials producers, fossil fuel companies becoming general energy companies."

Nishiyama pointed to the example of the Norwegian petroleum company Statoil, which removed the "oil" from its name and was reborn as one of Europe's leading general energy companies, Equinor, which even operates wind farms.

"Companies need to be prepared to review their business operations with decarbonization in mind," he said. "Both politicians and members of the public should be encouraging companies to make such efforts."

At this point, Kudo noted that the day's discussion had differed from previous discussions on climate change hosted by Genron.

"This time we talked about how to raise public awareness of the crisis, and how that will encourage them to take action," he explained.

Kudo noted that the discussion was far from over, and expressed his determination to continue providing members of the public with information that will help them consider the various issues the world faces, and with that, brought the hour-long dialogue to a close.