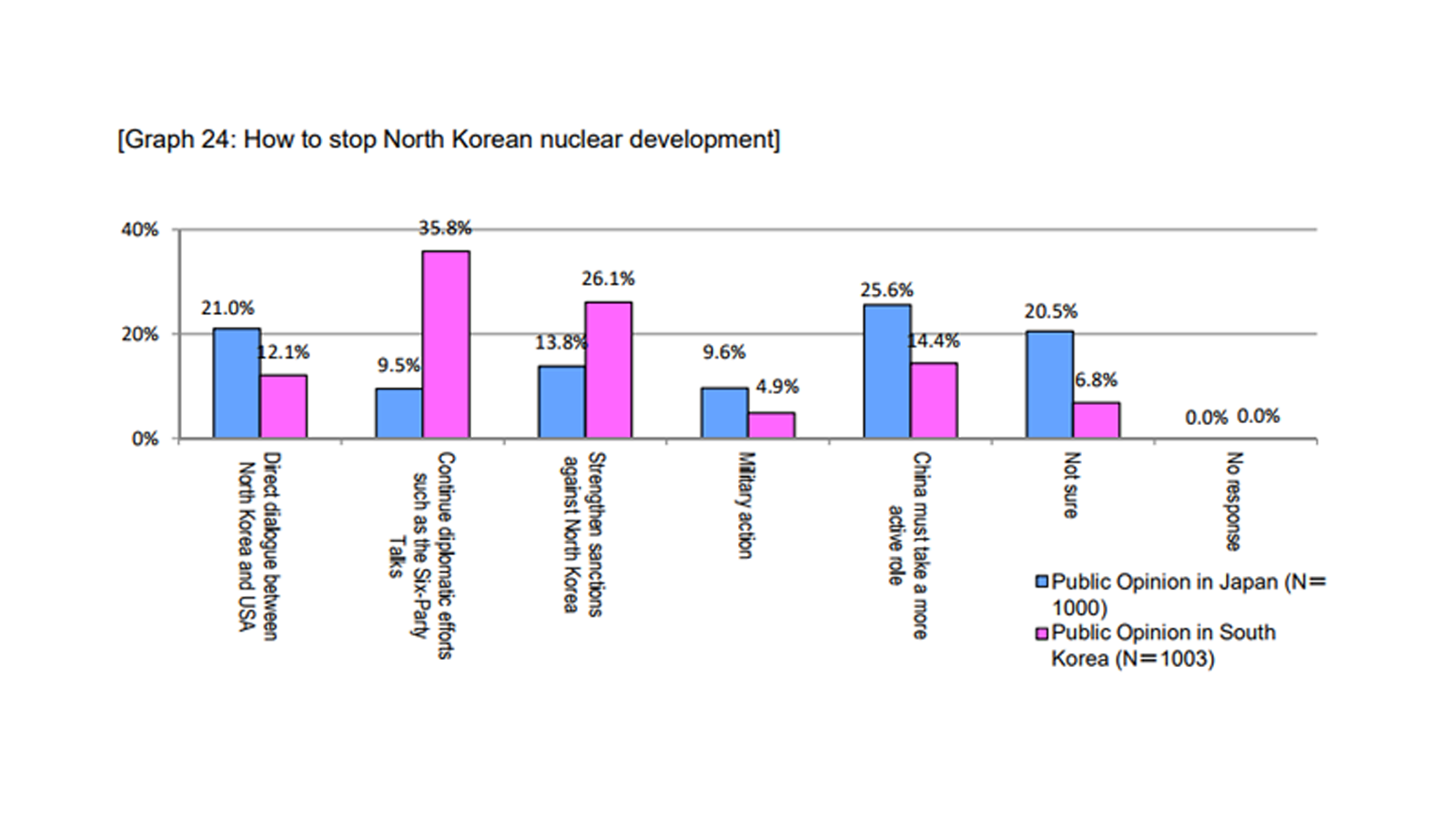 From June to July 2017, The Genron NPO and East Asia Institute (EAI) conducted joint public opinion polls in Japan and South Korea. The purpose of this annual survey is to grasp the state of mutual understanding and perception of each other between the Japanese and South Korean public and to monitor the changes over time, in order to contribute to reducing various misunderstandings among the two countries, and to promote greater mutual understanding between them. The result of this survey will be presented and utilized in a dialogue between Japan and South Korea, at 'Japan-Korea Future Dialogue' on July 29th, 2017. The opinion poll in Japan was conducted between June 17th and July 2nd by door-to-door home-visit method targeting men and women aged 18 and over. 48.6% of the respondents were men and 51.4% of them were women. The number of total valid responses was 1,000. The final academic qualifications of the respondents were as follows; elementary/middle school graduates: 8.3%, high school graduates: 46.5%, junior college/technical college graduates: 19.1%, four-year university graduates: 22.2% and graduate school graduates: 1.8%. Age distribution of the respondents were as follows; under 20: 2.3%, between 20 and 29: 12.1%, between 30 and 39: 14.8%, between 40 and 49, 17.3%, between 50 and 59, 14.5%, and 60 and above: 39%.

1. Impressions of One Another's Countries

1-1. Impressions of Japanese and South Koreans on One Another's Countries

1-2. Reasons Behind Each Other's Impressions

"Historical issues" and the "territorial conflict" continue to negatively impact the impressions of both countries on one another. In terms of good impressions, most Japanese mention South Korean modern culture, while most Koreans mention Japanese national character. 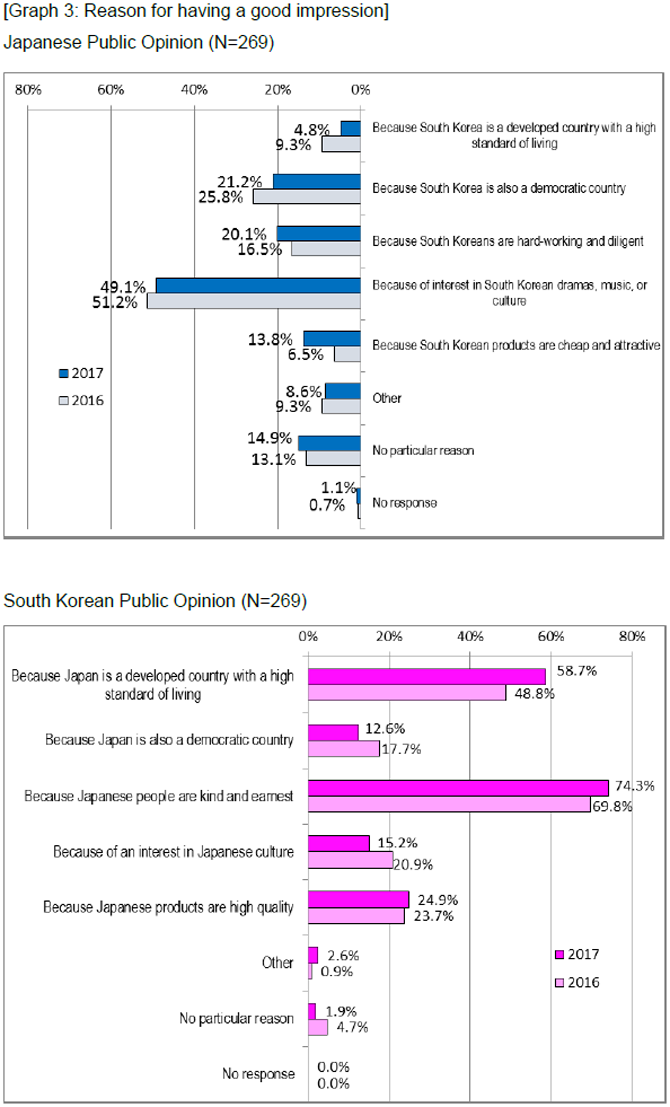 1-3. Recognition of Current National Sentiments Towards One Another

Approximately 70% of both Japanese and South Koreans consider current national sentiments to be "undesirable" or "problematic," showing an increase from last year. 2. Basic Understanding of One Another's Countries

2-1. Understanding of the Social/Political Systems 3-1. How Present and Future Japan-South Korea Relations are Viewed

Around 60% of both nationals perceive present Japan-South Korea relations as "bad," both showing an increase from last year.

3-2. What Should be Done to Improve Japan-South Korea Relations?

While South Koreans consider "territorial disputes," "comfort women" and "historical issues" to be significant in improving Japan-South Korea relations, the Japanese also view "state-level communication and building trust" to also be important, mentioning a variety of issues that should be addressed. Only 10% of South Koreans believe "cooperation in resolving North Korea's nuclear issues" will contribute to improving Japan-South Korea relations. 3-3. How Both Nationals View the Significance of Birateral Relations

3-4. Importance and Sense of Affinity Towards Bilateral Relations as Compared to China 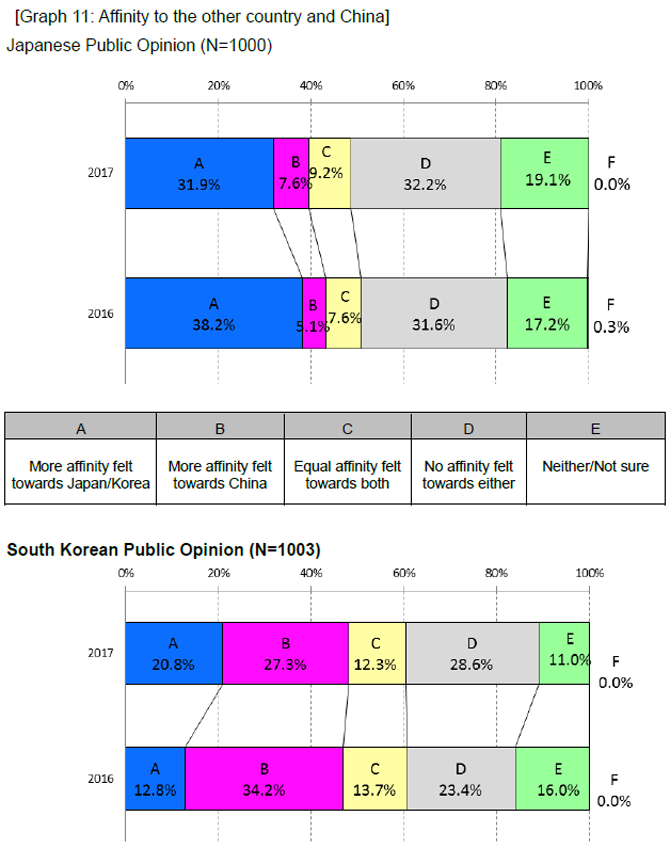 3-5. Countries Important to the Future of Japan/South Korea 4-1. Interest in Visiting One Another's Countries

For the Japanese, opinions are split between those who "want to go" to the South Korea and those who "don't want to go." In contrast, nearly 70% of South Koreans wish to visit Japan, showing an increase from last year.

5-1. Views on Historical Issues in Japan and South Korea

In terms of historical issues that should be resolved, there has been a large increase in both nationals who mentioned the "comfort women issue." 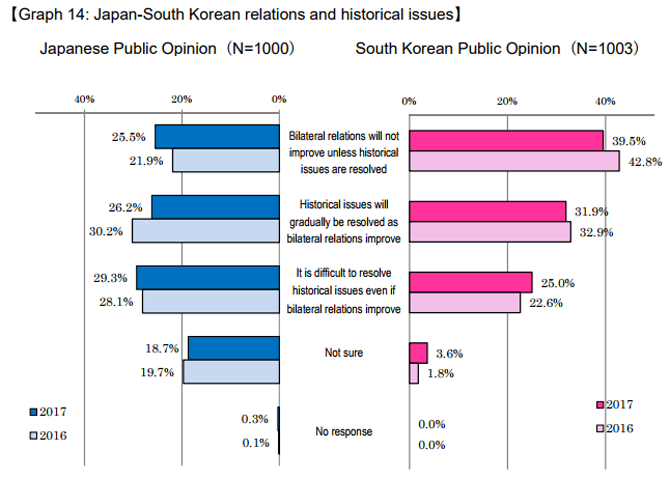 5-2. Views on the Comfort Women Agreement

In terms of the agreement between Japan and South Korea on the comfort women issue, over 40% of Japanese "approve" of the agreement, just slightly below last year's result. For South Koreans, the percentage of those who "disapprove" increased 18 points from last year and constitutes over half of the opinions this year. 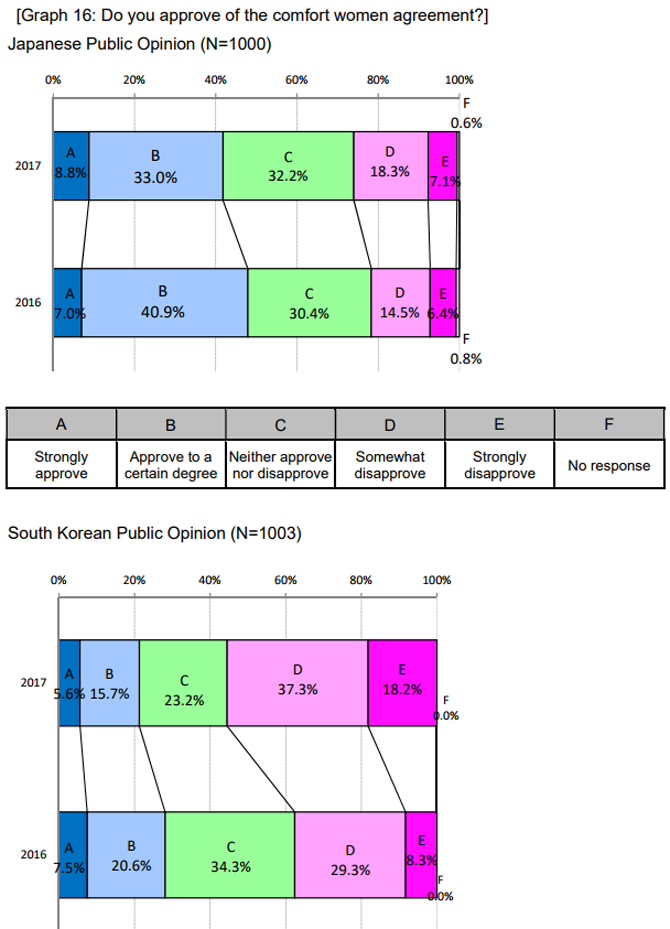 5-3. Has the Comfort Women Issue Been Resolved?

50% of Japanese and 70% of South Koreans feel that the comfort women issue has not been resolved by the agreement reached between the two countries. 5-4. How do the Japanese View South Korea's Disapproval of the Agreement?

6-1. Opinions on the Agenda to be Discussed at the Japan-South Korea-China Trilateral Summit

There has been a sharp increase in views among both Japanese and South Koreans that "North Korea's nuclear issues" should be discussed at the Japan-South Korea-China Summit, constituting 60% of opinions on both sides. 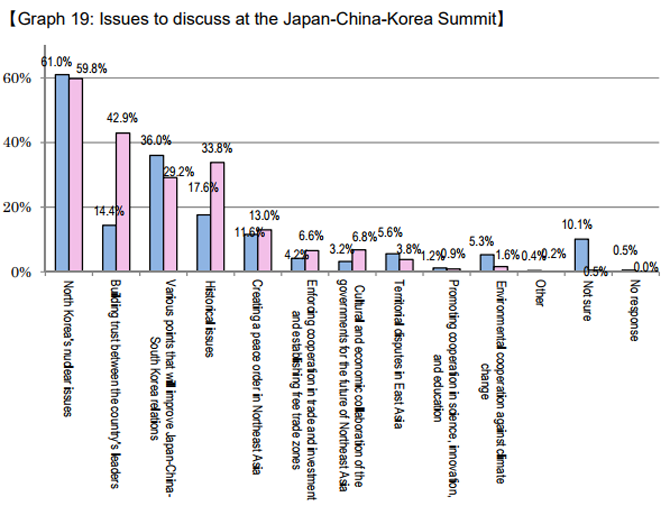 6-2. Impressions of One Another's Leaders

The Japanese still do not have any fixed impression of President Moon Jae-in. South Koreans continue to have a "bad impression" of Prime Minister Abe, constituting 80% of South Korean public opinion. Approximately 70% of both Japanese and South Koreans feel that the North Korean nuclear weapons issue is difficult to resolve. In South Korea, however, approximately 20% anticipate that the issue will be resolved in 10 years.
At the same time, while 40% of the Japanese believe that military action by the United States and other nations "will occur," over 40% of South Koreans believe that military action "will not occur."

In terms of effective means for stopping North Korea's nuclear weapons development, the Japanese feel that "China must take a more active role" and "direct dialogue between North Korea and the USA" must take place. Most South Koreans, however, responded that "continuing diplomatic efforts such as the Six-Party Talks" and "strengthening sanctions against North Korea" would be more effective. 8. The Future of the Korean Peninsula

8-1. About the Korean Peninsula 10 Years From Now

In both Japan and South Korea, there has been an increase in those who anticipate "conflict to intensify between North and South Korea" 10 years from now, based on the actions of North Korea. 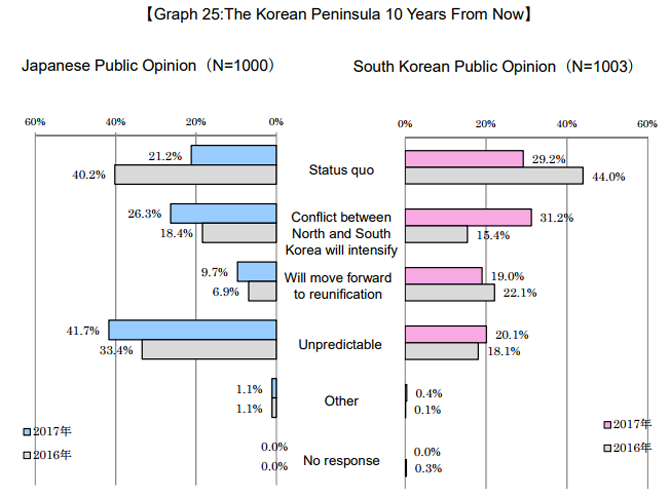 In terms of the possibility of military conflict between Japan and South Korea, over 60% of the Japanese believe that conflict "will occur." Among South Koreans, combining the percentage of those who responded "within a few years" and "eventually," this percentage dropped from last year; however, nearly 30% still believe that military conflict "will occur." 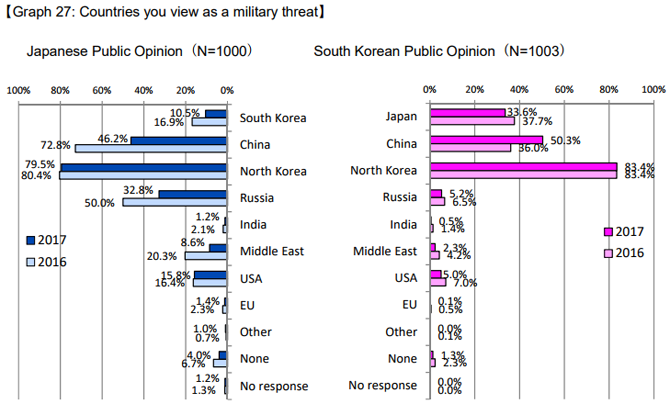 10-2. Countries and Regions of Significance in Terms of Economic Relations

Most of the Japanese responded that "the United States" is the most "economically important country" to their nation. "China" followed, but was 14 points below last year. Other countries selected by 20-30% of Japanese respondents included the "ASEAN," "EU," "India," and "South Korea."

On the other hand, close to 80% of South Koreans believe that "China" is the most important, while "the United States" constituted about 70% of responses. "Japan" (35.7%) followed, and South Korean responses centered on these three countries. 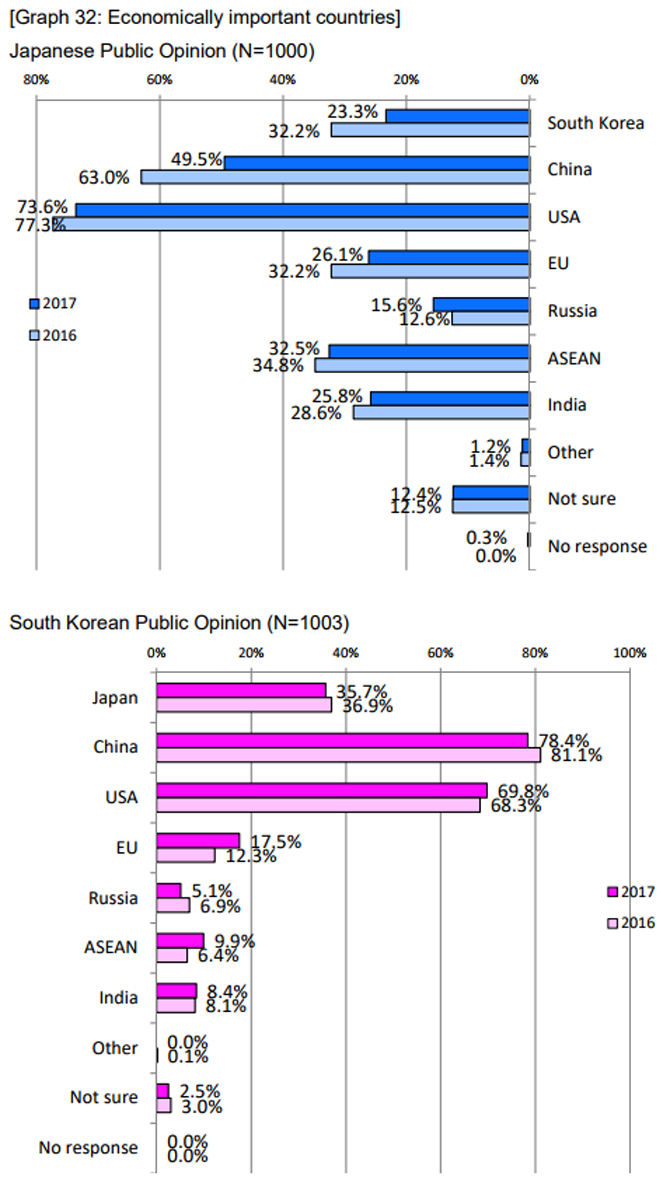 11. Japanese, Chinese and South Korean Influence
in Asia Over the Next Decade

11-1. Japanese, Chinese and South Korean Influence in Asia Over the Next Decade 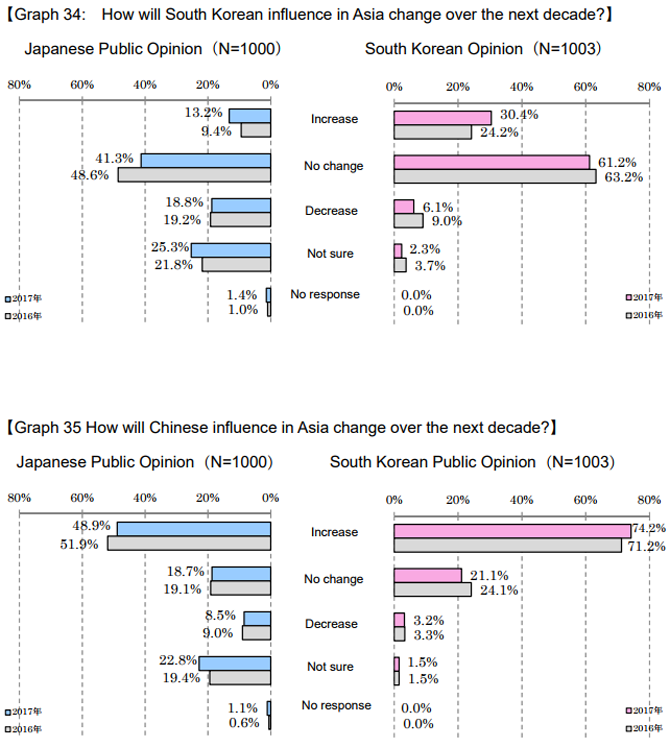 12. Media Coverage and Public Opinion on the Internet

In terms of the objectivity and fairness of domestic media in both Japan and South Korea, while most Japanese respondents selected "not sure/ no response", over half of the South Koreans feel that their media coverage is not "objective and fair". This percentage, however, fell 11 points from the previous year. 12-2. Does Public Opinion on the Internet Appropriately Reflect the People's Views?

40% of the Japanese and 60% of South Koreans feel that the internet "does not appropriately reflect the people's views."

13．Views on the Trump Administration

13-1. Views on the Trump Administration

Over 60% of the Japanese and 70% of South Koreans replied that they do not support President Trump's actions and his backwards stance towards free trade and multilateralism.
In terms of the influence of the Trump administration's actions on Northeast Asia, both Japanese and South Koreans are concerned with "security problems regarding North Korea's nuclear issues." On the other hand, concern over "alliance issues such as Japan-USA and South Korea-USA" constituted a high percentage of 70% among South Koreans, while it constituted a low 30% among the Japanese, showing a difference in understanding between the two countries. 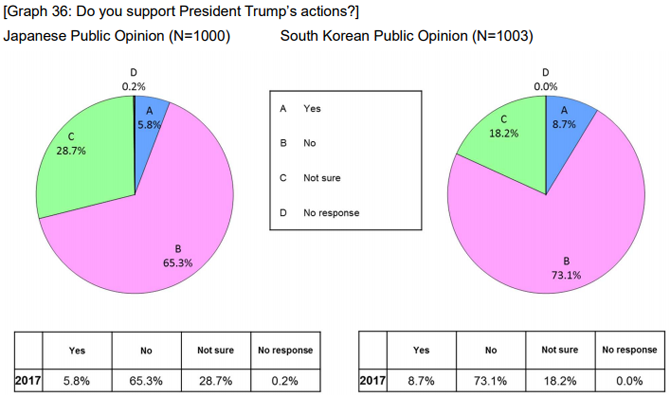 14-1. Degree of Direct Interaction Between Japanese and South Koreans 14-2. Interest in and Source of Information on One Another's Countries

＜Please send all inquiries about this survey to the address below＞