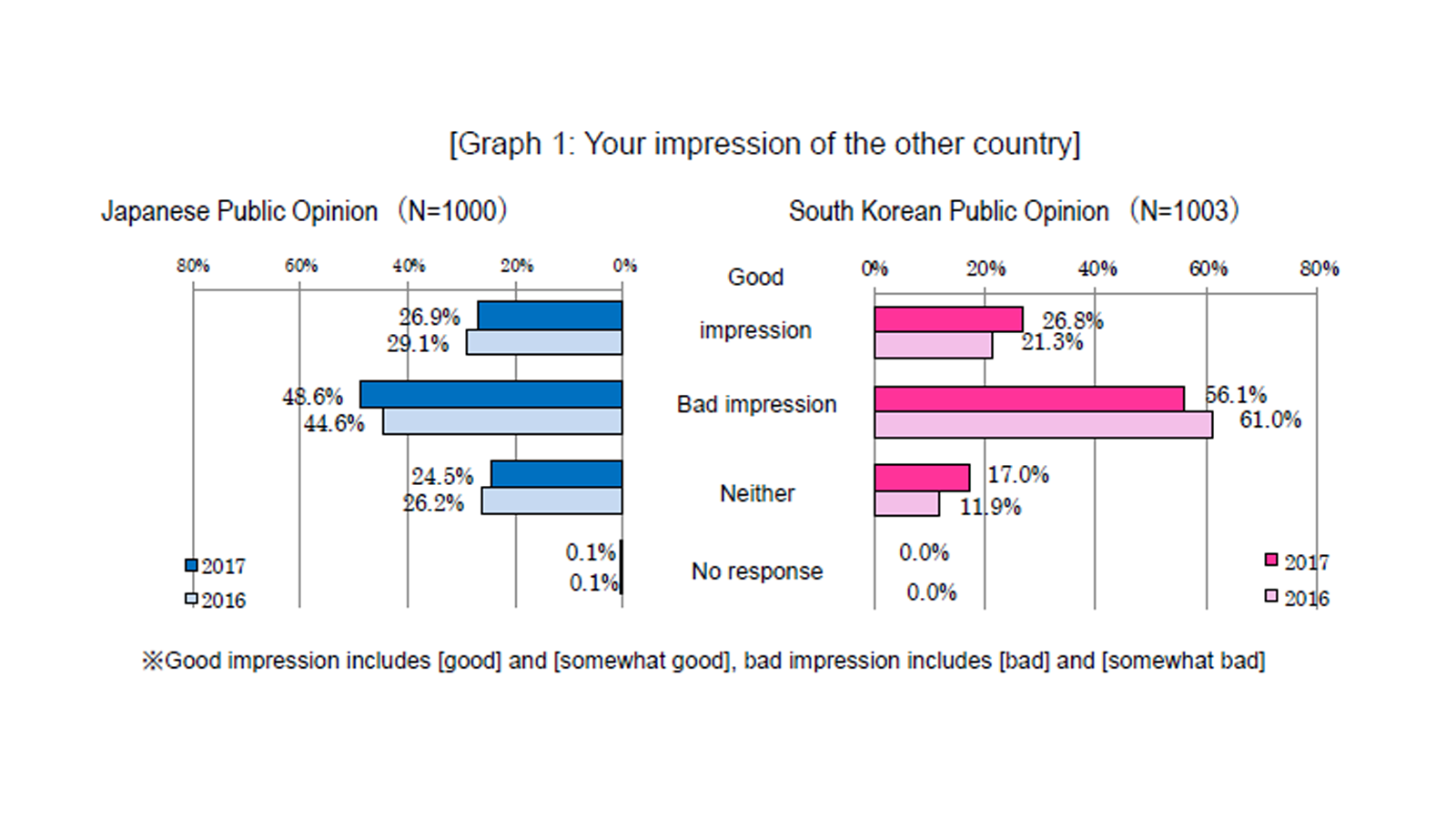 The Japan-South Korea Joint Opinion Poll 2017How can Japanese and South Koreans cooperate in future
for the sake of peace in Northeast Asia?

How can Japanese and South Koreans cooperate in future for the sake of peace in Northeast Asia against the backdrop of North Korea's nuclear ambitions and the new unpredictable U.S. administration? Although impressions of South Korea deteriorated somewhat among Japanese people, Korean public opinion regarding Japan showed signs of improving. While sharing concerns about the threat of North Korea and the policies of the new U.S. administration, for the sake of Northeast Asia as a whole both countries have to identify areas in which they can cooperate.

・Again, "historical problems" and "territorial disputes" have an adverse impact on public opinion in Japan and South Korea with regard to the other country. On the other hand, the reason behind favorable Japanese impressions of South Korea was contemporary Korean culture, whereas the reason for South Koreans' favorable impressions of Japan was their familiarity with the Japanese national character. Regarding South Korean public opinion, about half of those who said that they have a good impression of Japan had visited the country, which suggests that the increase in direct exchanges is contributing to the improvement of relations. Around 70% of the Japanese and South Korean public recognize that current national sentiment "is undesirable and I am worried,", and "it is problem, it needs to be improved," which represents an increase from last year.

・Regarding Japan-South Korea relations, there is no change from last year in that about 60% think they are "bad." Also about 50% of respondents from both countries answered that they "do not know," so we cannot draw an accurate picture of the future of bilateral relations. That being said, the positive opinion that "the relationship will improve" is increasing among South Koreans.

・As last year, around 40% of Japanese said they "approve" of the Japan-South Korea agreement on "comfort women," the Korean women who were forced to work in Japan's wartime military brothels, yet this sentiment decreased slightly since 2016. Over half of the Koreans polled "disapprove" of the agreement, an increase of 18 points on last year. Furthermore, 50% of Japanese and 70% of South Koreans think that "the issue has not been resolved," despite the Japan-South Korea consensus.

・In addition, half of the Japanese polled were unable to understand the South Korean dissatisfaction with and opposition to the agreement, and they thought South Korea should implement the pact. Less than 10% of Japanese think that it is necessary to make concessions to South Korean opinion and revise the contents of the agreement.

Japanese public opinion on new Korean President cannot be evaluated yet
・It is too early to gauge most Japanese public opinion on new South Korean President Moon Jae-in (with 31.9% saying "neither good nor bad" and 27.6% saying "do not know"). Yet on the other hand, South Korean opinions of Prime Minister Shinzo Abe are not far removed from last year, in that 80% have a "somewhat bad impression" or "bad impression" of the Japanese leader.

・Regarding the possibility of military action, 40% of Japanese think that "it will be taken," yet compared to this, 40% of South Koreans believe that "it won't occur." Regarding the question of how to stop North Korea's nuclear development, many Japanese cite the view that "China should intervene" and "direct dialogue between North Korea and the United States," while South Koreans believe "continuing multilateral discussions like the six-party dialogues" and "strengthening sanctions" will solve the problem. Less than 10% of respondents in both countries thought that military action would be an effective way to solve the problem.

More than 70% in both countries are against Japanese nuclear armament

・Over 70% of respondents in both countries oppose Japan developing or acquiring nuclear weapons. However, compared to last year, there is a slight increase in those who support it. Around 80% of Japanese are opposed to South Korean nuclear armament, but around 70% of South Koreans support it, meaning the number has increased since last year.

President Trump and the Allies

・Over 60% of Japanese and 70% of South Koreans do not support the stance of U.S. President Donald Trump on free trade and multilateralism. As far as the effect of the Trump administration's actions on Northeast Asia, both countries are concerned by "security problems such as the development of North Korean nuclear weapons."

・Both Japanese and South Korean are concerned about alliance issues with the U.S., but there is a difference in understanding because as many as 70% of South Koreans think this way compared to only 30% of Japanese. As for multilateral cooperation on global issues, something the Trump administration is skeptical of, there is consistent understanding in that around 80% of respondents in both countries believe "it is important."

The Japan-South Korea Future Dialogue was established in 2013 by The Genron NPO and the East Asia Institute (EAI) as the only problem-solving and open private dialogue between Japan and South Korea. The Japan-South Korea relationship is stagnating against a background of rising nationalism in the public opinion of both countries and a lack of mutual recognition, and it is becoming an obstacle to building peace in Northeast Asia. The purpose of this dialogue is to openly discuss the trends behind public perceptions with a public opinion poll, move public opinion by sharing the poll results and create an environment in which inter-government diplomacy can flourish.
In the 3rd Japan-South Korea Future Dialogue in Tokyo in 2016, the milestone of the 50th anniversary of diplomatic relations, the debates focused on "Why is the Japan-South Korea relationship important?" Many panelists, who are key figures in Japan and South Korea, pointed out that we should cooperate on future issues that are common to both countries, and the debate aimed to show what might be achieved in a future-oriented Japan-Korea relationship.