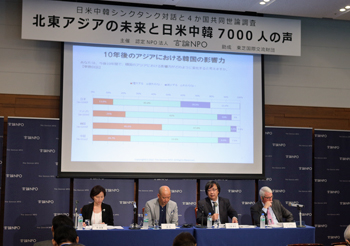 On Oct. 20, The Genron NPO held a Japan-U.S.-China-ROK Think Tank Dialogue at the International House of Japan in Tokyo. Highlighting the findings of the quadrilateral joint opinion poll held in the four countries, four representatives from the respective countries' think tanks got together in Session I to discuss the future of Asia and the relationships between each country. They also exchanged views on what was necessary to build a peaceful, stable regional order in Asia.

After Kudo gave an overview on the opinion poll results, Daalder turned to the situation in the United States, and noted that the public tends to reflect official government thinking. Thus the worries and concerns of the government are amplified by the citizens.

"The U.S. respects its relationship with Japan and South Korea, but the Japan-South Korea relationship on a government level is getting weaker over the years as the rise of China presents a more major economic opportunity for all," he said.

Daalder further noted how Japan and South Korea strongly support the U.S. maintaining its strong military presence in the Asian region, "which in turn reinforces the bilateral relationships between the U.S. and Japan and Korea."

As for the deployment of U.S. troops should China invade Japan, or North Korea attack Japan or South Korea, less than 50 percent of Americans thought the country should deploy its troops. "You may think these figures are low, but that has been the situation for a long time. Moreover, there has been a significant rise in the figures as compared to the 1970s when less than 20 percent of people supported the idea of such a deployment," Daalder said.

China's Yuan noted how the citizens hold different images of each country. "But they are generally very sensitive to the rising influence of each country," he said. He further commented that Chinese data is making positive, optimistic predictions, assuming that all four countries in the survey will rise toward the future.

In terms of a strong global presence, Yuan found China making a more assertive presentation while the U.S. has already established a strong global image. "However, Japan is not consolidating its global status," he noted.

He also mentioned that there were more similarities between the Chinese and the South Koreans as compared to the Japanese, and fewer Japanese desire to visit China while more Chinese seek to go to Japan. "When looking at the overall situation, Americans are more important for the Chinese as compared to the Japanese, and China-U.S. contacts are in a favorable condition. But the most important impactor on public opinion is communication," he stressed.

Meanwhile, South Korea's Lee noted the importance of bilateral relations and said, "the U.S. is more important for South Korea than China because of the economic value and the security it provides."

As to the relationship with the three countries, she said, "we don't think Japan is very important as compared to the U.S. and China." She also mentioned the South Koreans' concern over China getting close to North Korea and stressed that South Korea should raise its voice if China does not behave responsibly. Toward the future, Lee admitted the importance of her country improving its relationship with Japan, "but Japan cannot talk about pacifism without resolving its issues with South Korea and China," she added. 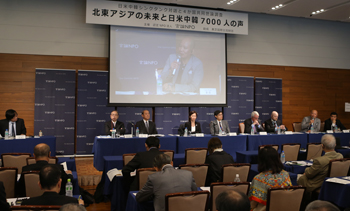 Session II scrutinized the future of Northeast Asia in relation to the quadrilateral joint opinion poll. Four more experts joined this session, including two panelists from Japan: Ichiro Fujisaki, former ambassador to the U.S., and currently president of the America-Japan Society and representative of Sophia Institute of International Relations, and Yuji Miyamoto, chairman of the Miyamoto Institute of Asian Research and former ambassador to China. From the U.S., James M. Lindsay, senior vice president, director of studies and Maurice R. Greenberg chair at the Council on Foreign Relations (CFR) in Washington, D.C., joined, while from China, Lei Zhao, manager of the Department of International Polling at Horizon Research Consultancy Group, participated, and from South Korea, Yul Sohn, dean of the Yonsei Graduate School of International Studies, also joined the discussion.

Kudo, as moderator, first asked how the U.S. viewed Northeast Asia in 10 years' time, especially as China and South Korea seem to underestimate the existence of Japan.

In response, Daalder said it is probably wrong to assume that Japan will become a lesser presence in a decade, "because it is seen very positively, especially in Southeast Asia, Abenomics is doing more good than bad with Japan's economic power continuing to play a major role, the Trans-Pacific Partnership would help, and because Japan's security reforms are extremely positive," he explained. "What Japan has to do is to demonstrate its importance in a reassuring way, especially toward China and South Korea," he said.

Lindsay added that Japan is still the third-largest economy in the world and that the U.S. government is very interested in encouraging Japan. "What Japan has to do is to clarify what it is willing to do. It boils down to the choice of the political leaders and the people. If it chooses to lead, it will reap the fruits of success," he commented.

Why China coos to Russia and the U.S.

Kudo then asked the Chinese panelists why China evaluates Russian power so highly. He also asked why China is seeking responsible actions from Japan while accepting the influence of the U.S.

In response, Yuan mentioned the security issue of Japan and its strong relationship with the U.S. in the security area, and said, "Japan should strengthen its security relationship with China." He also noted that Japan's current investment in China is weak, especially in the finance and service industries, whereas the U.S. is spending its money generously in those areas and said, "Japan has so many high-quality, refined products, so why not trade those goods?" He also mentioned that there aren't enough people-to-people exchanges between Japan and China.

As for China's relationship with Russia, Zhao said that Russia is a key partner for China in security and that China values its bilateral relationship with Russia. He added that the Sino-Japan relationship peaked in 2010, but since China has become the world's second-largest economy, its priority has shifted. "But as neighbors, China and Japan have no choice but to deal with each other," he said.

Kudo asked the South Korean participants why the citizens accept the extremely strong influential power of China, and what would be the South Korean response should China take violent action unacceptable to Japan or the U.S.

Lee responded by saying that the decline of Japanese influence is relevant in all data and the recovery of Japan's economy is not that promising. Furthermore, the per capita purchasing power gap no longer exists between South Koreans and Japanese.

"However, every man and woman in the world loves Japanese culture, and the cultural influence of Japan will continue into the future," she said. As for strengthening its political role, especially in the area of security, "The Japan-U.S. security partnership reinforcement shouldn't be viewed as an act to contain China. Japan should ultimately become a peace promoter," said Lee.

To counter such a situation, Sohn noted the importance of increasing multilateral economic cooperation like the TPP while strengthening its relations with the U.S. and Japan. "A multilateral relationship framework is beneficial for South Korea and Japan to make China behave," he said.

Low evaluation of Japan by China and South Korea

Kudo then turned to the two Japanese panelists and asked why South Korea and China, our neighbors, evaluate Japan very lowly.

Miyamoto mentioned that Japan tends to be self-deprecating, without being able to observe its counterpart objectively. From a power perspective, he said Japan is continuing to decline.

Fujisaki said though Japan was once the world's leading economy, it couldn't maintain that position. The same could also happen to China in time, he said. "Today, we should place top priority on the economy, instead of talking forever about past incidents, like Pearl Harbor, Hiroshima and Nagasaki. I'm not saying that we should forget the past, but we should face it calmly. Such a stance should also be taken toward China and South Korea," he said.

As to the issue of maintaining peace in the region, Lindsay mentioned that relative peace has been maintained in Northeast Asia since the governments have sought peace. He further said that in order to maintain a peaceful resolution, dialogue and the assertion of positions are necessary. "It is not about containing China. The general citizens of China should be told how much American enterprises are contributing," he said.

Daalder also agreed that Northeast Asia is a rather peaceful region, much more so than Europe. "The U.S. has made a strategic contribution to maintaining peace in this region by dispatching its military power. But as China rises, its current interest in the economy may shift to military power use. To prevent that from happening, the U.S. presence in this part of the world is necessary. That is also why the U.S. is establishing a peaceful relationship with three economic giants in the world: Japan, South Korea and China," he stressed.

Miyamoto noted the importance of maintaining what we have now, and avoid its destruction. "The U.S. and China should carefully consider the implications before acting," he said.

Lee assumed that the U.S. and China will find a way to achieve a soft landing on this issue, though a complex, multilayered alliance may be required. "I am quite optimistic about this region, as long as we maintain the goal of continued peace and prosperity," she said

In order to create and maintain peace, Yuan stressed the importance of balance. "You have to be a peacekeeper as well as a peacemaker. The relations with the U.S. and South Korea must be balanced, which Japan does not seem to be good at," he said.

Daalder thought that a useful starting point would be capturing public opinion and discussing it, and that such discussions could provide a constructive path to the future.