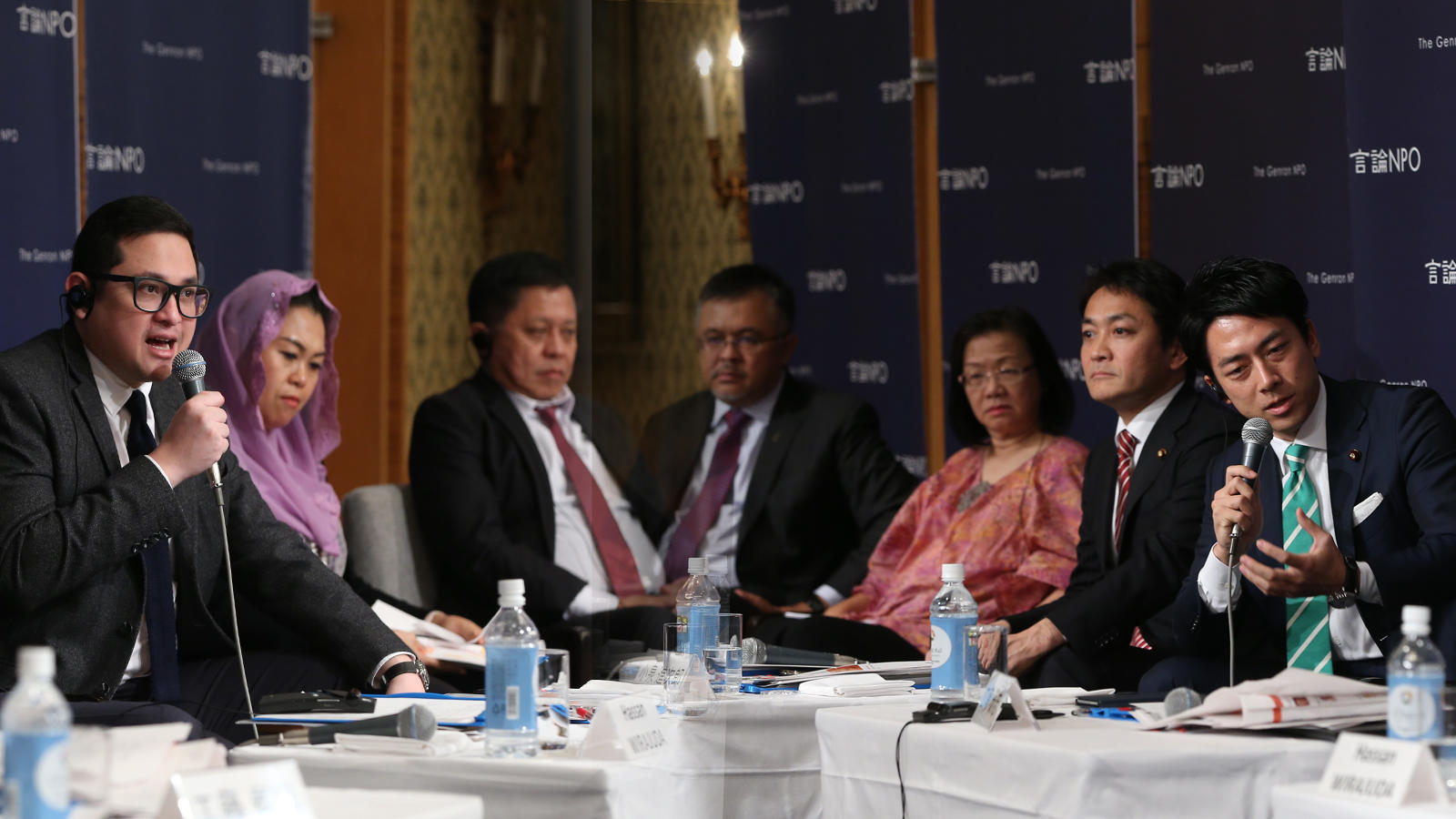 "What is the ideal form of democratic government for Asia?" (1/2)

⇒ "What is the ideal form of democratic government for Asia?" (2/2)

After years of struggle, humanity has made democracy a reality in many countries around the world. Unfortunately, democratic governments are the minority in Asia, and while some have taken the initiative to overcome the issues they face, issues of capacity and resilience still remain. The Genron NPO (Genron below) aims to get a better understanding of the issues facing Asian democracy and the form democratic government in Asia should take, and to that end, it hosted the 4th Asia Opinion Leaders Dialogue (AOLD) in Tokyo on November 22, 2018. Genron president Yasushi Kudo opened the event with some questions and comments designed to form a basis for the discussion.

The keynote address was provided by Yasushi Akashi, Chairman of the International House of Japan and former United Nations Under-Secretary-General. Akashi's address covered a wide range of issues, from his work in organizing elections with the United Nations Transitional Authority in Cambodia to his thoughts on the future of democracy in Japan, but a recurring theme arose throughout his comments. Namely, democracy is weak and ineffective without the support of the people. In order to achieve that support, particularly in Japan, the political debate must reflect the people's concerns and not simply focus on entertainment value of the discussions being held.

Before the discussions began, Nurul Izzah Anwar, Member of Parliament for Malaysia, offered her own words of encouragement for the panelists and her support for Genron's goals in a video message. She also provided another departure point for the discussions to come, emphasizing the importance of protecting the "creativity and freedom" of the people as countries learn from each other.

Populism has gained a foothold in the West, but it has also begun to gain momentum in Asia where authoritarian leadership seems to be on rise. Genron's opinion polls show that people in Japan and some Asian countries are becoming increasingly skeptical about democracy, and this session aimed to assess these phenomena and uncover the challenges Asian democracy is facing today.

Kudo took to the stage to moderate Session 1 and was joined by the following panelists: Hassan Wirajuda, Former Minister of Foreign Affairs, Indonesia; Yenny Wahid, Director of the Wahid Institute; Maria Chin Abdullah, Member of the Parliament of Malaysia; Ibrahim Suffian, Program Director and Co-founder of Merdeka Center; Bam Aquino, Senator, Philippines; Tom Villarin, member of the Philippines House of Representatives, Head of Akbayan party; Shinjiro Koizumi, Member of the Japanese Diet and member of the Liberal Democratic Party (LDP); and Yuichiro Tamaki, Member of the Japanese Diet and President of the Democratic Party for the People (DPFP).

Kudo began the discussion by saying that the Genron studies suggest that the public may not quite understand the point of democracy, as people in Asia consider success using economic development measures rather than the presence of democratic institutions. He asked the panelists their opinions on the state of democracy in their countries, and whether the sense of crisis felt by many experts is reflected in public opinion there.

Hassan Wirajuda responded by first noting that Indonesia's development should perhaps be judged in light of the events of 1998, when the military regime lead by President Suharto fell. "From that perspective," Wirajuda said, "I would say people are generally happy."

Yenny Wahid echoed Wirajuda's positive assessment of Indonesian politics, but also described some of the challenges they face.

"One characteristic of democracy is the noise it brings because of the freedom of expression," she said. "Some people long for the more stable and orderly manner of the authoritarian regime. But democratic government must negotiate with other actors in society, including actors who aim to change the system."

Despite these challenges, Wahid believes that most Indonesians still feel that democracy is the best system for their country.

Bam Aquino responded to a question from Kudo about the worries that the Philippines is in danger due to the "strongman" nature of its current president, Rodrigo Duterte, stating that "the Philippines is still a firm democracy, but it is at risk. Institutions are being attacked; the media is being attacked." For Aquino, this means that those trying to uphold democratic ideals must make an extra effort to connect with the people. He also offered an explanation for the global rise in populist sentiments.

"The reason there was a shift from liberal democracy to the strongman type is because a lot of liberal democrats have failed to deliver on their promises, and we see that around the world, " he explained. "At least in the Philippine context, it's not a turning away from democracy to authoritarianism; they are looking for a government that can deliver."

Aquino is not worried however, because historically speaking, authoritarian regimes fail to deliver to a greater extent than democracies. If Duterte's promises are left unfulfilled, Aquino thinks that the electorate will "again look for another type of government and regime that will deliver".

Tom Villarin provided another perspective on Duterte's role in the Philippines, stating that the nation's democracy is not inclusive, with many politicians coming from political dynasties. Villarin's opinion is that it is the dynastic nature of Philippines that has led to a backlash against what is perceived by the disillusioned masses as a "democracy deficit."

Although Villarin described how Duterte does have "control of social media", has the resources of the government behind him, and is reaping the benefits of the country's high economic growth, he also pointed out that there is a widening inequality gap and the president is not addressing the issues that come with that.

Maria Chin Abdullah provided some details about her experience as a member of the former opposition in Malaysia, which aimed to build a united front to implement institutional reform to reduce corruption and to restore the economy. They faced numerous issues when forming the new government, particularly since they "didn't expect to win", but they were still dedicated to fulfilling the promises they had made when running for election.

"Democracy has no template," she stressed. "There will be errors along the way. We now have a chance, for the first time in 60 years, to try democracy."

Ibrahim Suffian spoke from his perspective as a member of Malaysian civil society, saying that, "many Malaysians are excited about the prospect of reform" and describing the change of government as a "confluence of many factors". However, there are issues that remain to be addressed, including the need to change the "culture of subservience to leadership", and for people to be more tolerant of the "noisiness" mentioned previously by Wahid. He recognizes that it will take time for the changes to take root and translate into greater economic opportunity, but hopes to "learn from our friends around the region to ensure the reforms last".

Kudo turned the discussion to Japan, and asked the two representatives of the Japanese Diet to weigh in on the survey results showing that the Japanese people distrust their political parties.

Yuichiro Tamaki began by expressing his pride in Japanese democracy, but tempered that by warning that the government and the opposition should learn to "work together to hear the voices of those who have no voice." He also expressed disappointment in the standard of debate in the Diet, as party members on both sides continue to follow their respective party lines. With more thorough discussion and debate, Tamaki believes that the Diet could be made to function better. 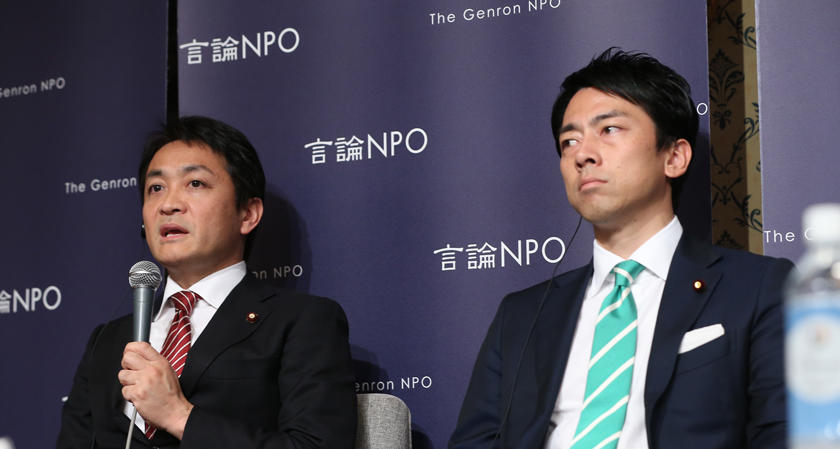 Shinjiro Koizumi believes the current state of the world is providing Japan with an excellent opportunity to play a greater role on the global stage.

"The US has lost the moral position that allowed it to dictate the rule of law, free trade, and human rights. Populism is partly at fault," he explained. "I think this is an opportunity for Japan to offer our form of democracy."

Kudo turned the discussion towards political party reform, and referred to an anecdote provided in the previous day's forum, The Tokyo Conference on Democracy 2018. Describing the Japanese lawmaking process, LDP Diet member Shigeru Ishiba said, "the ruling party engages in discussion before presenting bills in the Diet, essentially fait accompli." Kudo asked Koizumi how he would resolve the issue of requiring LDP members to follow party lines in voting, and encourage more discussion in the Diet.

"The Diet is a piece of theatre staged by the ruling and opposition parties. It needs to end," Koizumi said. "Regardless of which party is in power, the framework remains the same. That's why I'm looking for parliamentary reform."

"Perhaps it is a small thing," he continued. "But a first step could be a paperless Diet, in which politicians debate and reach consensus face-to-face." 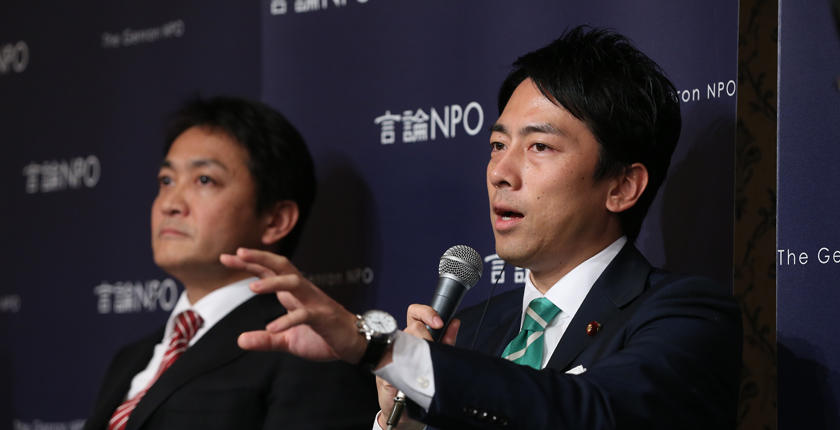 Aquino explained that political party reform is also needed in the Philippines, but said that in his country's case, it should first address party financing.

"Elections are either built around candidates who can win or candidates who can fund you," he said. Aquino's party has begun an experiment to get away from the politics of financing by bringing regular people into the fold rather than continuing to run with traditional politicians.

Malaysian demographics mean that its parliament faces different issues, which tend to revolve around ethnicity and the religious dominance of Islam, but for Maria Chin Abdullah, the solution is similar to Koizumi's suggestion for Japan in that cross-party cooperation should be encouraged.

Wahid explained that Asian democracies must reach a certain standard that goes beyond political parties as, "It's not just having democratic institutions, but also ensuring the voices of minorities (are heard)."

Tamaki wrapped up Session 1 with a broader plea regarding the future role of political parties, suggesting that in this time of greater diversity, perhaps politicians should be focusing on how that diversity should be tied to policy.

⇒ "What is the ideal form of democratic government for Asia?" (2/2)