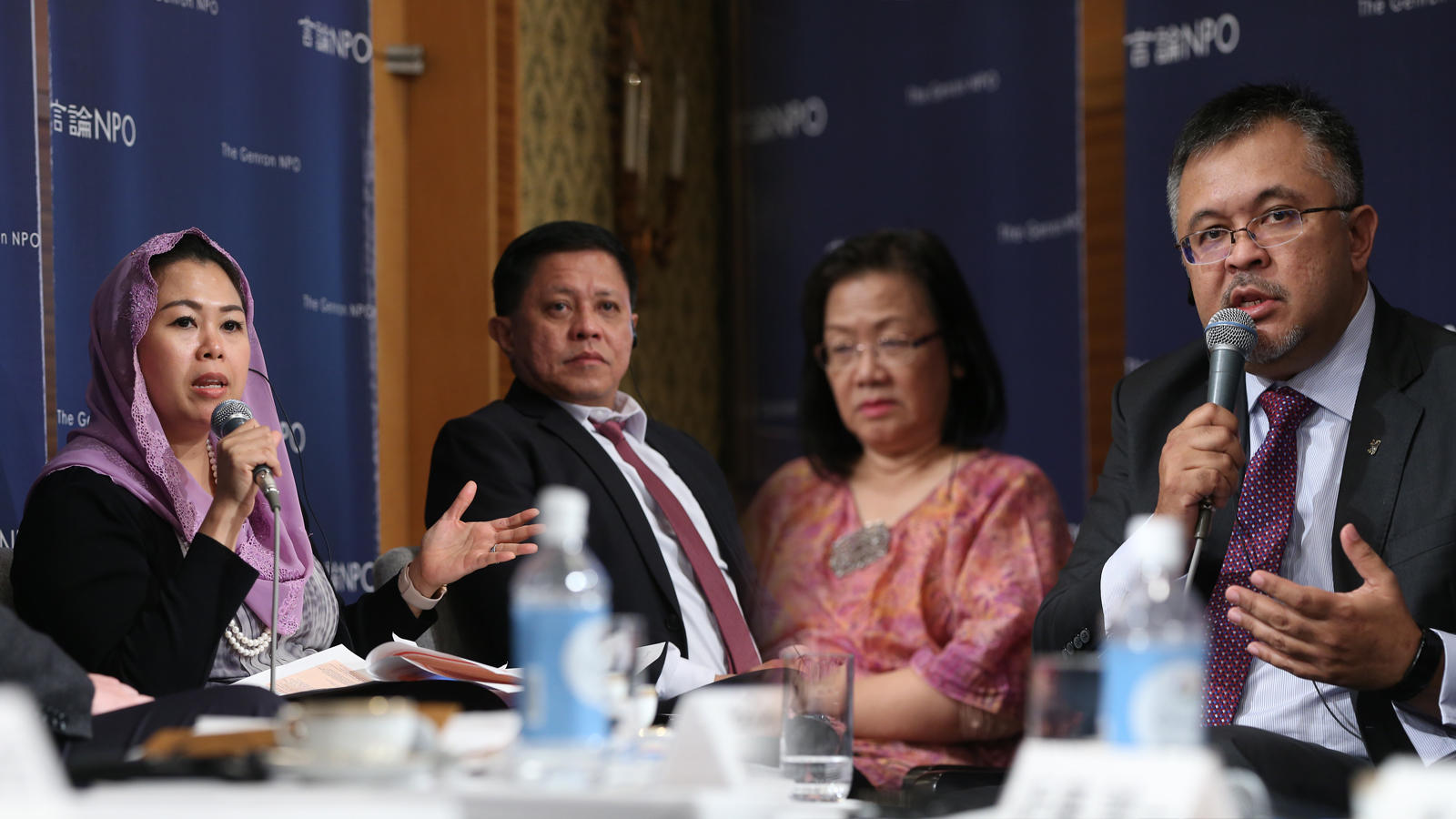 "What is the ideal form of democratic government for Asia?" (2/2)

⇒ "What is the ideal form of democratic government for Asia?" (1/2)

Yasushi Kudo again served as moderator for Session 2, the aim of which was to find a more concrete vision for democracy in Asia. Seiichi Kondo, Former Commissioner of the Agency for Cultural Affairs, and Jun Honna, Professor at the College of International Relations, Ritsumeikan University, also join this discussion,

Traditional representative democracies are in the minority in the Asia-Pacific region, and they have been unable to respond to the changing media and the rise of China. Kudo asked the Session 2 panelists their thoughts on the concept of an ideal form of democratic government tailored to Asia, and about the future of democracy.

With only a third of Asian nations being democracies, Wirajuda agreed with Kudo's assessment of the status of democracy in Asia. However, due to Asia's sheer size and diversity, he thought that for the purposes of this discussion it would be better to concentrate on East Asia. East Asia is home to a diverse array of governmental systems that include democracies, single-party authoritarian states, and military governments.

"That is why it is necessary for us to work closely together," he said. "I think (democracy) has a future, but...it must be systematic. People need bread, but also need political space. Their rights and freedoms must be respected."

Aquino stated emphatically that democracy, "definitely has a future", and returned to the previous session's discussion about experts' concerns regarding the Philippines and its new president.

"The pendulum will swing back," he said. "Liberal democracy has checks and balances, but dictatorships (do not), and they have proved to be the most corrupt (system of government) in the Philippines."

Kudo asked Aquino whether he is worried that when the pendulum does swing, it may end with someone worse than Duterte taking power, and Aquino's answer to this was more measured.

"It won't go back to the glory days...we need something attractive to people," he said. "That may sound basic, but people don't connect to candidates anymore. One pitfall is that people weren't understanding the language we used. We have to learn again, and for a lot of liberal democrats, that also requires self-reflection." 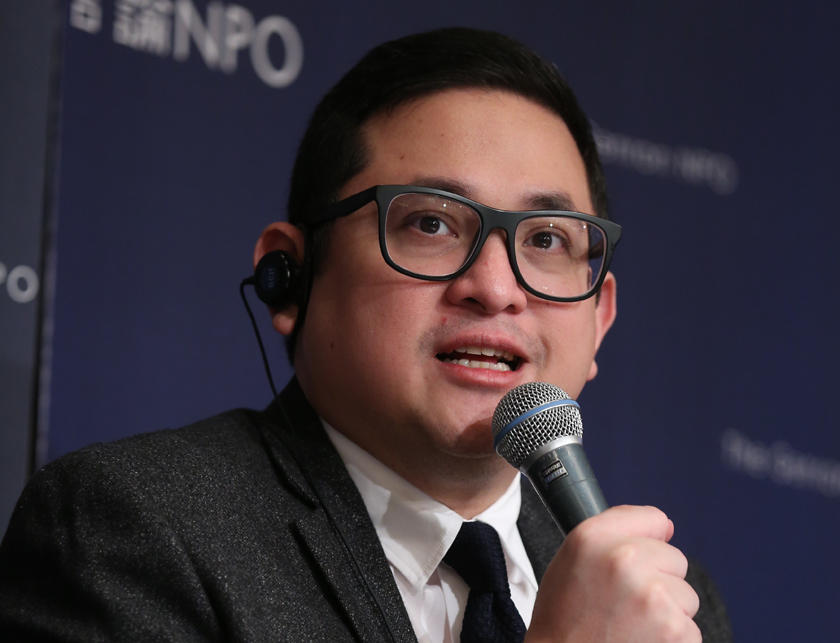 Kudo turned to Wahid and expressed his admiration for Indonesian democracy, singling out moderate Islam as an example of why the country is so important. However, he wondered how far extremist Islamic factions have "inflamed the people's views" in previous elections.

Wahid answered that in a democracy, even "the Islamist faction has the right to have their voices heard. The challenge is that they appear to be better at organizing."

The moderate factions are "scattered around without a common theme", while radicals offer provide simplistic solutions to complex problems. In other words, "they create an enemy (so they can) be the hero."

"Trump blamed the Mexicans for stealing jobs from white male Americans," she noted and added that there is a similar phenomenon in Indonesia that uses the language of religion, "which is more potent and emotional."

To better respond, Wahid believes, the moderate parties need to offer solutions that are "in the language of the people."

Kudo asked the panel why there seems to be such an overwhelming difference between Western leaders and leaders in Asia.

"Asian leaders are more aggressive, maybe because there are more young people," he said. "There are big demographic differences, and Asian countries are full of energy, with enormous momentum."

Jun Honna agreed with Kudo's analysis and thinks that the point is an important one.

"The challenges faced by Western democracies and Asian democracies are different," he said. "but in both, democracy is at stake."

Honna worries that the rising tide of populism is going to highjack democracy, describing the movement as being "everywhere in Western countries, and I think it can come to Asia. Perhaps it will be more nationalistic, perhaps far right or far left, or perhaps religious in nature."

Honna pointed out that some individuals are already using populist sentiment in Asia to gain power, claiming that the establishment is corrupt, and that it is the "poor who are being sacrificed." There is also expanding intolerance to diversity, Honna said, and consideration must be given to the societal impact of demonizing people of different races and religions.

Seiichi Kondo described his belief that the West and Asia share similar challenges in democracy, in that democratic institutions in both regions are operating well. However, those institutions are still run by people who try to defend their own positions rather than keep in mind that they are elected officials with a duty to the populace. That being said, he remains optimistic.

"Asian countries are learning how to enlighten their politicians, industries, and consumers and deliver a more mature democracy," he said.

Kudo expanded on the rise of nationalism around the world and the possibility that it has been caused by globalization. Alongside the hegemonic positions held by the U.S. and China, there has been an increase in protectionist and exclusionist policies being implemented as well, i.e. xenophobia is also on the rise. Facing these issues, Kudo wanted to know how Asian democracies should work together, what principles they share, and how the region can present a unified front to the world.

Wirajuda brought up the fact that China has shown that growth is not dependent on the presence of democratic institutions. It has become a model for some countries in the region, which may be wondering why they should "bother with democracy when other systems can make our people prosper."

This is why Wirajuda believes there is such a great necessity for both mature democracies and emerging democracies in Asia to work closely together. However, he did have one caveat.

"My view is that we cannot impose democratic values," he said. "But we can share our experiences, and share our successes and failures, and in that way, improve."

Honna pointed out that the western style of democracy has limits, and that the "Asian network-style of democracy" could serve as a model for other countries and safeguard democracy's survival. He explained that while civil society doesn't have the same presence in Japan as it has elsewhere in Asia, creating partnerships in that realm could have a positive effect. Honna also referred back to a previous point made by Tom Villarin about the two political realms that are currently waging battle - the politics of hate and the politics of dignity - and said that, "People who believe in the politics of dignity should network and work together."

Villarin added that another challenge will be to bring in those people who still live on the margins of society in many countries, and pointed to the recent mid-term elections in the U.S. as a successful example of that.

"Strongmen tend to be misogynists, all over the world," he explained. "And I think women have to be brought into the politics of dignity. This was seen in the U.S. mid-term elections, which had many firsts. The youngest female in office. Two Muslims. LGBTs. The first refugee."

Villarin believes that a similar phenomena is needed in Asia as well, saying that "we need some firsts in the region. We have to drop the non-interference policy in ASEAN, and bring in people on the domestic level."

Kudo posited that social media could be part of a new democratic infrastructure, though he also admitted that its current use as a means of disseminating "fake news" could lead to national security issues. He asked whether the overall effect is negative or positive, and Wahid responded by pointing out one of the major problems of social media. Political groups are using bots to control the narrative by flooding social media services with millions of messages, and drowning out the voices of actual people.

"That's what happened with Russian intervention in the U.S. election," she continued. "Social media is a double-edged sword. It you consolidate your position, have your own social media army, and your own bots, you can (use) it."

While Wahid believes that social media does provide people with a platform to make their voices heard, the "nature of engagement is virtual", so others can hide behind pseudonyms and use the services to "spread their hate".

Before bringing Session 2 and the forum to a close, Kudo asked the panelists what expectations other Asian countries have of Japan. Much of the discussion revolved around Japan's stability.

Villarin observed that the "crisis of capitalism hasn't hit Japan as hard as other countries", but also added that he believes it is "high time" that Japan becomes more aggressive in promoting the values of democracy. In a similar vein, Wahid described how Japan "can be a beacon of hope" for the many countries experiencing volatility due to the rise of identity politics and authoritarian ideals.

Aquino recognized that most countries tend to "stick to their own problems" and that there is some benefit to such a stance. However, he also emphasized the importance of democratic countries banding together in times of confusion.

"If Japan decides to stand up and be counted, and take an active role, I think it will mean a lot for other countries in the region," he said.

Wirajuda praised Japan's stability as a mature democracy and developed country, and said,
"it has every reason to play an active role in promoting democracy in the region." He pointed out the potential benefits of Track 1.5 diplomacy, which has been described as "unofficial interactions between official representatives of states".

Maria Chin Abdullah followed up with a more specific suggestion on how progressives in Japan can play a role in promoting democracy in Malaysia by way of engaging with the many Malaysian students studying in Japan. In addition, ASEAN and other regional platforms could serve as means of promoting the concept of democracy building in the region.

Suffian suggested that Japan can build democracy in the region by showing how democracy has become embedded in Japanese culture. He continued by saying, "Japanese organizations and institutions can support that by helping build capacity and strengthen civil society, the voices of the media, and the economic institutions."

Kondo noted that there have been no signs of rising populism in Japan as yet, but "before the pendulum swings", Japanese actors must understand the issues faced by the countries of ASEAN in order to protect the Japanese style of democracy.

"Industrialized countries may not learn from Japan, and Asian counties have their own ideas," he said. "Japan should practice, not preach, and aim to control the pendulum."

Kudo closed the forum by thanking the panelists and stressing the importance of Japan pitching in to help defend democracy in our rapidly changing world.

⇒ "What is the ideal form of democratic government for Asia?" (1/2)