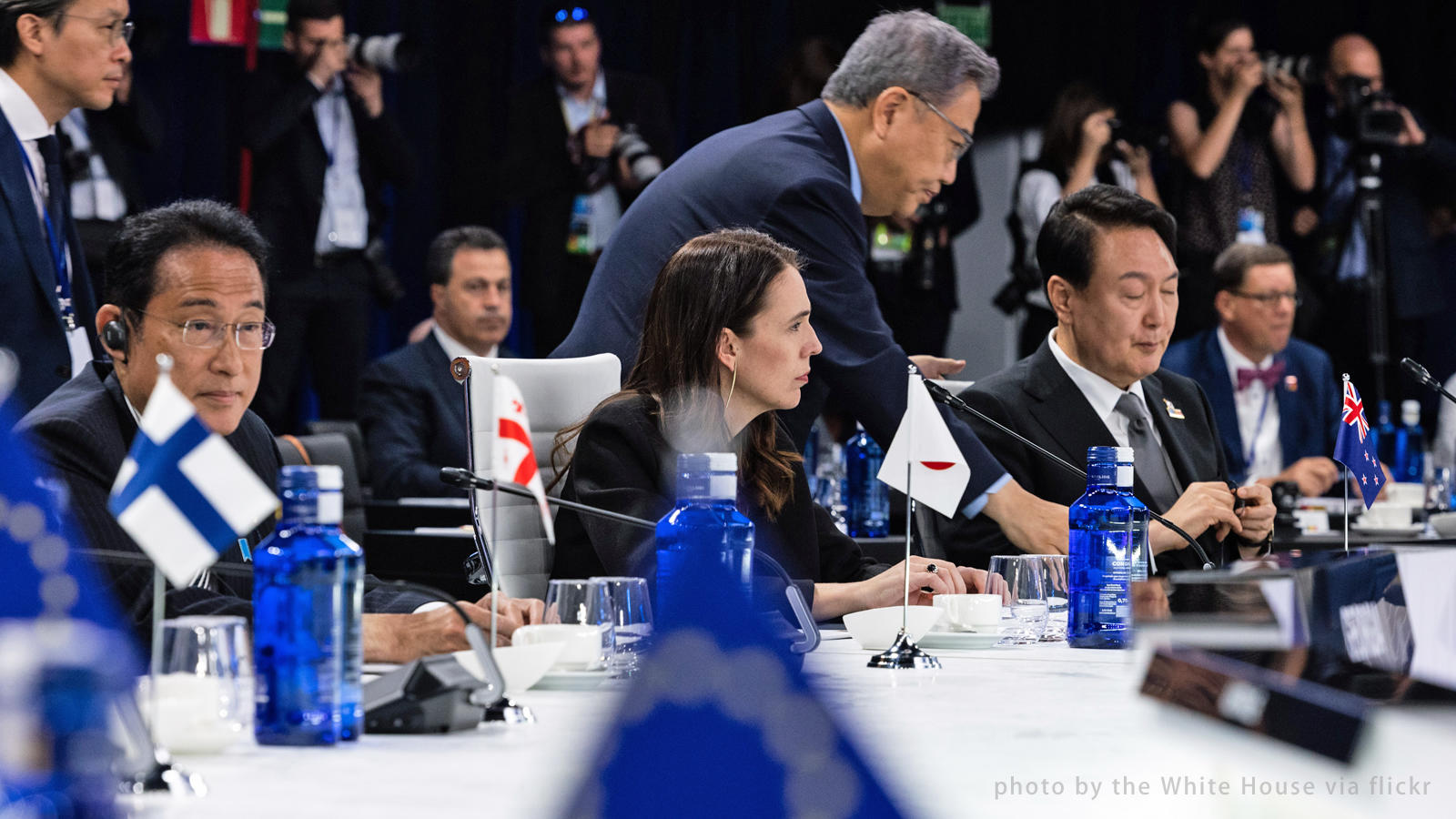 Academics, former ambassadors and other authorities from Japan and South Korea agreed at a recent forum on the urgency of promoting bilateral and trilateral ties involving the United States to cope with the ever-increasing tensions in this part of the world.

They also exchanged candid views on the wisdom of engaging China in a multilateral security framework as North Korea is poised to carry out its seventh nuclear test, the first since September 2017, which would pose a threat to all.

Park In-Kook, a former South Korean ambassador to the United Nations, served as moderator of the session. Park cited three issues, which are undermining world peace - the Ukrainian conflict, and its direct and indirect repercussions for the Asia-Pacific region; North Korea's prospective seventh nuclear test and the failure of the review conference of the Nuclear Non-Proliferation Treaty (NPT); and the ever-increasing U.S.-China rivalry.

He then asked the panelists' views on the fact that additional sanctions have not been imposed on Pyongyang despite its continuing provocative acts and how to deal with the confused international security policies, including the credibility of U.S. extended deterrence.

Chun Chaesung, head of the National Security Research Center of the East Asia Institute (EAI) and a professor at Seoul National University, kicked off the debate by citing the findings of the 10th Japan-Korea Joint Opinion Poll, which show a great deal of similarity in public sentiment in the two countries toward Seoul-Tokyo security cooperation.

Both peoples are fully aware that Japan and South Korea share the common values of free and democratic nations, while facing North Korea's nuclear issue and China's military threat.

Referring to the heightened international tensions caused by Russia's invasion of Ukraine and the regional fallout triggered by Speaker of the U.S. House of Representatives Nancy Pelosi's recent visit to Taiwan, Matsukawa warned that the Taiwan Strait (between Taiwan and continental Asia) and the Bashi Channel (between Taiwan and the Philippines) are sea lanes that are vital to the national security of Japan and South Korea.

Noting that a Taiwan contingency must be prevented at any cost, she pointed to the urgent necessity of facilitating trilateral cooperation between the United States, South Korea and Japan.

With the common understanding that China and North Korea are threats to the national security of both nations, we must expand the windows of opportunity to rectify the soured Japan-South Korea relations and promote Japan-South Korea-U.S. trilateral security collaboration, Matsukawa emphasized.

Following Matsukawa, Professor Hong Kyudok of Sookmyung Women's University told the forum that, like the ongoing Ukrainian crisis, East Asia is a dangerous region in that historic issues have not yet been resolved.

He referred to the NPT review conference that ended in failure in late August without reaching consensus and without issuing a report, due to opposition mainly from Russia, and stressed that South Korea and Japan must raise their voices on the issue of nuclear disarmament.

Regarding Russian President Vladimir Putin's threat to use strategic nuclear weapons in the Ukrainian conflict, Hong described Putin's remark as a serious challenge to the peace of humankind.

China and North Korea may be closely observing how the international community appears to be unable to cope with this grave situation, he said, adding that South Korea and Japan should act together to prevent conventional wars from developing into the use of nuclear weapons.

The next speaker was Yuji Miyamoto, a former Japanese ambassador to China, who termed the NPT review conference "a major fiasco," and warned that the nuclear weapons non-proliferation regime has been markedly weakened.

In order to stave off such a tendency in the countries' public opinion, it is imperative to maintain the credibility of the U.S. extended deterrence policy with the three nations closely sharing and coordinating their positions. He also said that efforts should be made to prod China to adopt a tough stance on Pyongyang, as Beijing holds a key to the issue of North Korea's nuclear development.

Miyamoto's remarks were followed by Ahn Ho-young, a former South Korean ambassador to Washington and currently president of the University of North Korean Studies.

In his capacity as a special guest speaker to the forum, Ahn, citing a U.S. report on the military strength of the world's major states, warned that the world's five major military powers - the United States, Russia, China, Japan and South Korea - are either located or are deploying military forces in Northeast Asia. If North Korea is added as a nuclear power, three of the six military powers in this region are non-democracies.

Since the 9/11 terrorist attacks, the United States has adapted to the new environment in terms of military doctrines, weapons systems and military drills, leading subsequently to the marked downgrading of its capabilities and the desire and intention to cope with the new international security challenges, Ahn observed.

The Japanese special guest speaker Shinsuke Sugiyama, a former vice minister of foreign affairs and former ambassador to Washington, asked how Japan and South Korea could contribute to building global peace when the universal collective security system centered on the United Nations is now broken.

Admitting that a dysfunctional U.N. is a foregone conclusion from its inception, given the veto power permitted only to the superpowers, the Russian threat of the use of nuclear weapons in the Ukrainian conflict is evidence of a further collapse of the U.N. collective security system, which has been barely sustained in the 1970s and '80s due to a certain level of restraint by the permanent members of the U.N. Security Council, Sugiyama lamented.

In this connection, he cautioned against the probability, albeit not likely for now, of Chinese President Xi Jinping resorting to an act of invasion (of Taiwan), like Russia's invasion of Ukraine.

The Ukrainian crisis has proven the truism that Clause 42, Article 7, of the U.N. Charter does not work, he said. Now that we can no longer rely on the U.N., if a similar situation should occur in East Asia, we must depend on the allies and/or resort to individual or collective self-defense rights to protect our lives, Sugiyama said.

Referring to the "Far East clause" in the Japan-U.S. security treaty, which includes Taiwan as an area for the treaty's coverage, Sugiyama pointed out that Article 3 of the ROK-U.S. security treaty states that in the case of an armed attack in the Pacific region, both nations would act to meet the common danger. "Our understanding is that the Pacific region, referred to in this article, is the area east of Hawaii and eventually includes Taiwan," he said.

Sugiyama regretted that U.N. sanctions against North Korea have not worked, given the fact that Pyongyang's nuclear development program has not been halted. "Unless Japan-South Korea relations are reinforced further, the security foundation in today's East Asia and the Asia-Pacific region will be greatly weakened," he stressed.

Following the remarks by the panelists and guest speakers, additional comments were made by the panelists and from the floor. They included Chun Chaesung's call for an in-depth study of South Korea's response to a Taiwan contingency; Matsukawa's proposal for the creation of a broader network of deterrence, extending from the South China Sea to the Pacific Ocean, by the United States and its like-minded allies and Miyamoto's proposal, shared by Sugiyama, that Japan and South Korea should maintain their own contacts with and approaches toward China to create a peaceful environment or to make positive use of China's economic clout.

The session ended with moderator Park In-Kook concluding that from now on, Japan-South Korea bilateral security dialogue must be extended to cover challenges in the India-Pacific region, and not just narrowly focus on the North Korean problem.