The following is a provisional translation of The Genron NPO President Yasushi Kudo's commentary, which appeared on the op-ed pages of the March 19 issue of The Yomiuri Shimbun, Japan's largest-circulation vernacular daily newspaper -- Editor

In late February, the Council on Foreign Relations (CFR) of the United States organized a regional conference of its Council of Councils (CoC), a global network of leading policy institutes from 23 countries, in Sydney. I attended this conference as The Genron NPO was chosen as Japan's sole representative to the CoC from its official launch in 2012.

As expected, Japan-China relations surfaced as one of the focuses for discussions at the meeting during the stay in Australia. Some alleged that Prime Minster Shinzo Abe was attaching more importance to what is on his mind than to what he should do as the nation's leader to create a peaceful environment with Japan's neighboring countries while others asked what the international community could do to ease Japan-China tensions. I replied to these questions by stating that Japan is rich in diverse opinions on key issues and Mr. Abe is doing his best in his way to pursue peace in this part of the world. Yet, I felt that the critical tone of international opinion against Japan was much harsher than I had anticipated.

This latest experience has reminded me of the book "Crisis for Japan" authored by historian Kanichi Asakawa, which was published more than a century ago. He was the first Japanese professor at Yale University, and he lived in the United States during and after the last war. He died there in 1948, or three years after the end of the war. In his book, Asakawa criticized the militarist direction Japan was taking and predicted the occurrence of Japan's calamity 36 years before Japan's defeat in the war. Especially, he cautioned about the tendency of Japan and its people not to objectively comprehend international opinion, warning that such a tendency would eventually drive Japan to extremism. Historical fact shows that Japan walked the path to war as foretold by Mr. Asakawa. My apprehension is that such a tendency prevails in Japan today. In order for Japan to increase its presence in the international community and win the trust of other countries, it is necessary to listen humbly to the voices of the international community.

I must admit that it is a formidable task for any government to make the slightest compromise regarding matters related to territories or sovereignty. This has led to the present stalemate in Japan-China relations in which no government-to-government consultations are being held over the matter of crisis management. Meanwhile, there are occasions in which media reports in both countries add fuel to the conflicting emotions between the peoples of Japan and China. Precisely because we are in such circumstances, it is of vital importance to hold dialogue at the initiative of private-sector actors.

For instance, there are growing concerns about the occurrence of unintended or accidental incidents, or military clashes between Japan and China in the East China Sea. If such should happen, public opinion in both countries would heat up to augment confrontations, leading to a full-blown war, given the absence of a government-to-government hotline for communications in case of an emergency and the malfunctioning of governmental diplomacy. At the conference, the participants shared the recognition that there should be a significant role for non-governmental actors to play to avert such a crisis.

There is the terminology "public diplomacy." This means "governmental public relations diplomacy" aimed at transmitting a country's claims or arguments directly to the people of another country. But this form of diplomacy is promoted by the government as its main actor and its ability to influence the public opinion of a foreign country is quite limited. Hence a "new civil diplomacy," which is initiated by private-sector actors to organize open debate by people with the mind-set of a "stakeholder" and to find solutions to transnational challenges with the help of responsible public opinion. I named it "Genron (debate-oriented) Diplomacy."

Unlike the exclusive dialogues, discussions and talk shows involving experts and researchers, this new diplomacy provides a venue for public debate that ordinary citizens can join with the sense of a stakeholder. In this context, it was extremely significant that the agreement of a "no-war pledge" (or the Beijing Consensus) was reached at the Ninth Tokyo-Beijing Forum in October last year. The historic agreement came when the international community harbored serious concerns about the possibility of a Japan-China war. There is a likelihood that intergovernmental diplomacy between Japan and China might begin to function should the "no-war pledge" win broader national support in both countries, generating mounting voices calling for the prevention of conflicts. 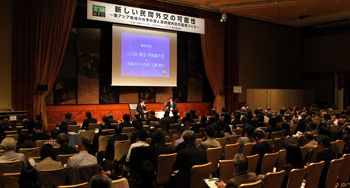 Toward the end of last year, The Genron NPO launched a new project called the "New Civil Diplomacy Initiative" and plans to hold an international symposium March 29 in Tokyo on the role of civil diplomacy for the prevention of conflicts in East Asia by inviting panelists from the United States, Britain, China, South Korea and Singapore. I believe that the "Genron Diplomacy" will be able to assume an increasingly larger role by adding multilateral dialogues to our conventional bilateral dialogues.