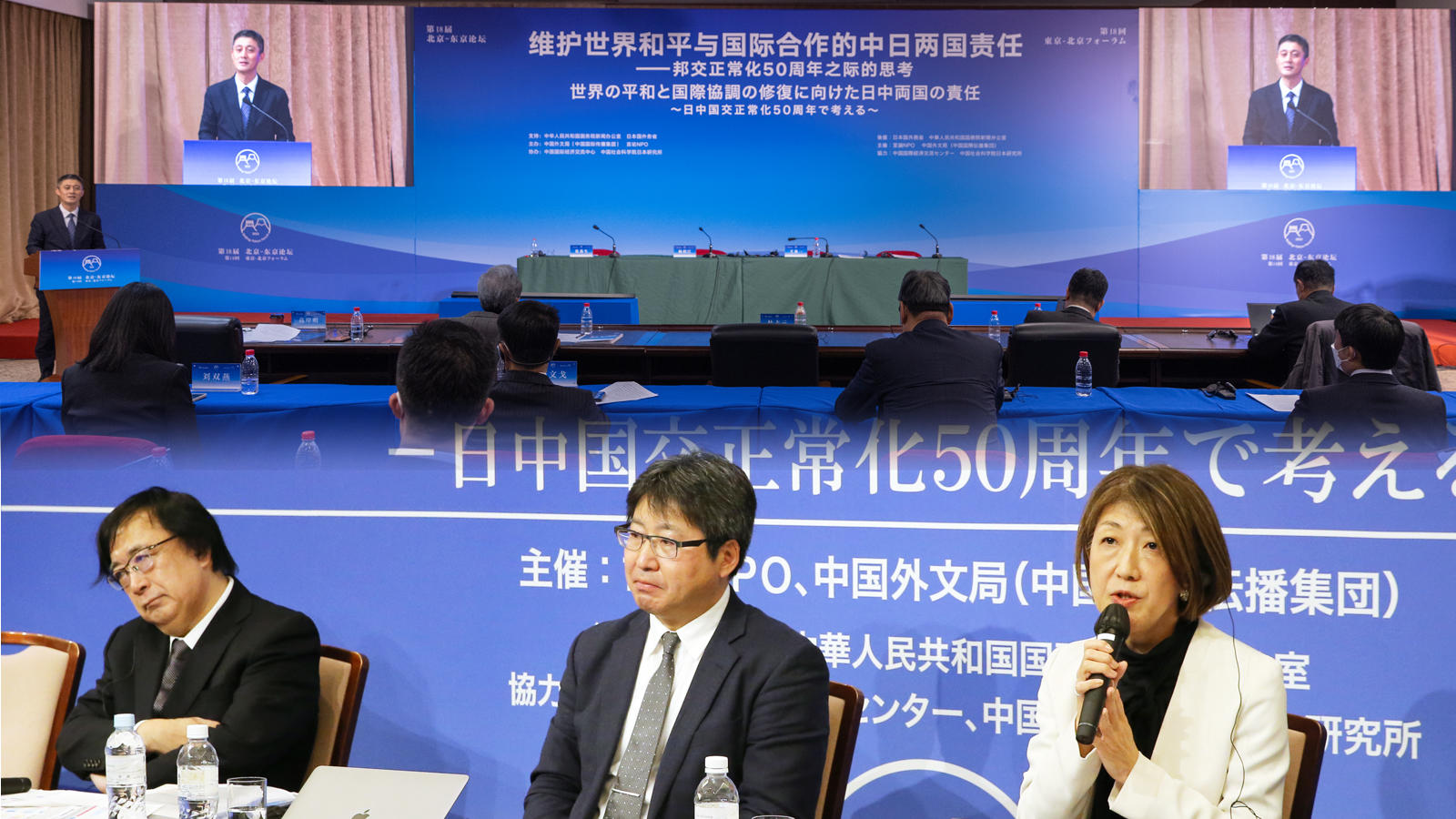 The 18th Annual Tokyo-Beijing Forum, a high-level Track 1.5 dialogue between Japan and China, was convened for two days on Dec. 2-4, 2022, by linking the venues in Tokyo and Beijing online.

The forum was brought to a close after adopting the five-point Declaration for Peace and Cooperation, featuring support for the preservation of an international peaceful order based on the United Nations Charter, the peaceful solution to the war in Ukraine and the imposition of self-restraint by the parties concerned to ease tensions in the Taiwan Strait.

The Tokyo-Beijing Forum was started in 2005 by Japan's independent, nonprofit think tank The Genron NPO as a private-sector strategic dialogue and the annual forum has since been held every year. Its Chinese partner was changed in 2015 to the China Foreign Languages Publishing Administration.

The 18th annual forum was particularly significant as it was the world's first full-fledged dialogue involving top Chinese opinion leaders after the conclusion of the Chinese Communist Party's 20th National Congress on Oct. 23, 2022.

The forum's main theme was how to restore international peace and order, which is now at a critical point since Russia's invasion of Ukraine, and how to repair multilateral cooperation amid the polarization of the world and the worsening China-United States confrontation.

Some 100 academics, diplomats, former government officials and other authorities from Japan and China exchanged candid views in the forum, consisting of eight breakout sessions on such subjects as international peace and order, politics and diplomacy, security affairs, economy and digital technology.

From Japan, Foreign Minister Yoshimasa Hayashi delivered a message via video, as did Chinese State Councilor and former Foreign Minister Wang Yi. Japanese Prime Minister Fumio Kishida, in his video message to the reception at the end of the forum, expressed his willingness to promote dialogue between Japan and China for the cause of peace and security in Northeast Asia.

Throughout the two-day forum, full-scale debates continued between Japanese and Chinese delegates over the challenges to security in the North Asian region, along with the restoration of a peaceful global order. At the breakout session on political matters, both sides pointed to the breakdown of government-to-government diplomacy. Prompted by the summit between Kishida and Chinese President Xi Jinping on Nov. 17, 2022, held for the first time in three years, delegates from both countries exchanged views on how to rebuild mutual trust between the governments of both countries.

At the same time, heated and sometimes acrimonious debate was conducted at the breakout session on security affairs within the context of the Taiwan issue against the backdrop of the recent mounting tensions in the Taiwan Strait, along with the Japanese government's readiness to formulate the National Security Strategy, a key guideline for Japan's national security policies. However, both sides emphasized the importance of reinforcing the hot-line mechanisms for crisis management and of holding regular consultations between the militaries of both countries.

At many of the eight breakout sessions, Chinese delegates asserted that it is the United States that is destroying the world's economic order, and the U.N.-led framework for international peace and order, adding that Japan is merely obsequiously following the United States. Against such Chinese criticism, Japanese delegates voiced strong counterarguments, leading to fiery debates. However, many delegates from both countries agreed that there is a need to proactively promote dialogue to explore the possibility of Japan-China cooperation.

In the process of drafting the joint statement on the basis of these debates, the Chinese delegates had earlier showed reluctance to include "Ukraine" in the document. However, the Chinese side eventually reached a compromise with the Japanese side and agreed on the need to emphasize the importance of a peaceful solution to the war in Ukraine, and of maintaining peace and order in compliance with the United Nations Charter.

The finalized document, named Declaration for Peace and Cooperation, referred, as its pillars, to the importance of restoring an international peaceful order, reinforcing crisis management in Northeast Asia and promoting the realignment of Japan-China relations, which have just marked the 50th anniversary of the normalization of diplomatic relations, from a global perspective, among other things.

Specifically, the Declaration consists of the five agreements as follows:

1.  both sides jointly support every effort to avoid an escalation of the Ukrainian crisis, and hasten its peaceful solution;

2.  both sides seek all the parties concerned to restrain from any action that may lead to the elevation of regional tensions (in the Taiwan Strait);

3.  a further worsening of the tendency toward global divisions should be averted and the breakdown of the world economy into regional blocs should be avoided;

4.  the governments of Japan and China should consult how to reconstruct bilateral relations from a global perspective and to examine new agreements, if necessary, by reaffirming the contemporary significance of agreements both governments have reached to date; and

5.  it is urgently important to rebuild mutual trust between the governments, while it is damaging for both countries to see private-sector endeavors on both sides for mutual understanding losing momentum.

Prior to the Tokyo-Beijing Forum, The Genron NPO, its Japanese host, and its Chinese partner, the China Foreign Languages Publishing Administration, announced the findings of the Japan-China Joint Opinion Poll in 2022.

The 2022 joint survey found that about half of the Chinese people observe Russia's invasion of Ukraine negatively, while some 60 percent of them anticipate the possibility of conflict in the Taiwan Strait, thereby expressing their antipathy to disputes in the Northeast Asian region and raising their voices to call for peace.

At the 18th Tokyo-Beijing Forum, a special breakout session was created exclusively to discuss major findings of the 2022 joint opinion poll. Regarding a change in public opinion in China, one Chinese panelist at this session commented that in an about-face from the conventional one-sided rebuttal by the Chinese public of U.S. actions, they have come to squarely face the harsh reality of the U.S.-China confrontation, thereby harboring concerns over conflict in this region.