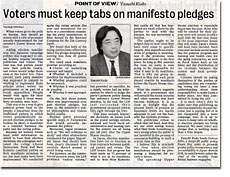 When voters go to the polls on Sunday, they should go armed with a tally of promises actually implemented for last autumnﾕs Lower House election.

Adding election manifestoes into Japanese campaign politics was supposed to create healthy tension between politicians and voters. The idea was that parties would state their policies clearly, and voters would judge those aims at the ballot box. Once elected, each party member was supposed to commit to working to implement those policies either within the government or as part of a vocal opposition. People would vote again for their favorite party if those manifesto promises were kept.

This was to be a way to give political power back to the people, a departure from the traditional pattern in which voters pessimistically expected election pledges to be broken. In short, a manifesto is a contract between the party and the voting public.

Because we believe voters need solid information on which to base their election decisions, my colleagues and I rated the ruling Liberal Democratic Party and New Komeito coalition parties on their manifesto promises to see just how many have been implemented. We conducted again the rating system this year and announced the results at a convention examining the party manifestoes in May, hosted by the National Congress for the 21st Century Japan.

We found that both of the ruling parties have effectively failed the pledge-keeping test, scoring less than 40 points out of 100.

On the first three points, there was improvement over past election pledges, but even so, the manifestoﾕs stated philosophies and visions lacked clarity.

Neither party provided specific steps or frameworks that would actually implement the policy.

Moreover, vague promises such as "We will continue to study" and other abstractions dominated the pages. Important issues that should have been clearly discussed were carefully skirted around to avoid losing votes.

For instance, on the controversial pension issue, the LDP promised ﾒradical reform,ﾓ but provided no specifics. As a result, voters had no information by which to judge the partyﾕs pension policy during last autumnﾕs Lower House election. In the end, the LDP just railroaded their government-proposed reform bills right through the Diet.

This time around, important decisions on issues such as the postal savings system, national and local fiscal administration and nursing care for the elderly are all being put off until after the Upper House election.

In Japan, election manifestoes have yet to function as true contracts between political parties and voters. The LDP boasts that progress has been made on 93 percent of what it put in its manifesto, and so does New Komeito. But really all that has happened are small efforts by the parties to deal with the pledges. No real movement is evident.

The parties ought to be judged only on how close they have truly come to specific targets. Any superficial evaluation of progress is meaningless if the promises were value and abstract in the first place. So long as this remains the case, no party is ever going to be responsible for what it says in its manifesto. That is why our group insisted in May that each party should rewrite its manifesto before the Upper House election.

What the country urgently needs is a government that will rebuild the social security and other systems that have become bankrupt. It is as clear as daylight that the present levels of pension or insurance levies are hardly adequate to pay out the benefits the systems promise.

Yet politicians refuse to admit that out loud. And they are not even asking voters what they think. Something is very wrong when the public is not involved in the process of consensus-building at such a crucial time as this.

I believe this is precisely the time when election manifestoes should be presenting a blueprint for societyﾕs future.

The upcoming Upper House election is especially important because those who will be elected for their six-year term will remain in office until 2010. By that time, many of the most important issues that will shape Japanﾕs future will have been decided. Such concerns include social issues like the pension program and nursing and health care for the aging population, as well as fiscal issues such as tax hikes and the distribution of tax revenues between the central and local governments.

Citizens should be asking themselves if the parties or candidates they are considering voting for have a true understanding about their responsibility to make Japan a better place. Are they committed to doing the job?

It is each voterﾕs duty to make sure that publishing an election manifesto doesnﾕt become just a passing fad or is not cheapened into a mere campaign tool. It is up to voters to keep tabs on whether election pledges are being honored. We must reject any pledge that is nothing more than a trite slogan.