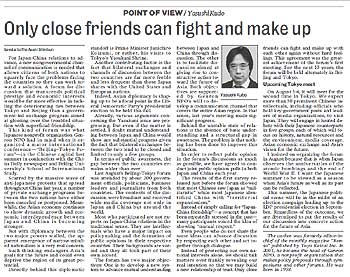 Only close friends can fight and make up

Special to The Asahi Shimbun
For Japan-China relations to advance, a new nongovernmental channel of communication is needed that allows citizens of both nations to squarely face the problems facing the countries so they can work toward a solution. A forum for discussion that transcends political prestige and economic interests would be far more effective in tackling the deteriorating ties between Tokyo and Beijing than a government-led exchange program aimed at glossing over the troubled situation with superficial friendship.

This kind of forum was what Japanese nonprofit organization Genron NPO had in mind when it organized a major international conference.“Beijing-Tokyo Forum”.in the Chinese capital last summer in conjunction with the China Daily newspaper and Peking University’s School of International Study.

Scarred by the massive wave of anti-Japanese protests that spread throughout China last year, a number of private exchange programs between the two nations have either been canceled or postponed. Meanwhile, the Asian economy continues to show dynamic growth and economic interdependence between Japan and China is becoming stronger.

But with diplomacy between the two major powers stalled, the apparent emergence of narrow-minded nationalism is a very real concern.

Such thinking endangers Asia’s goals for the future and could even deprive the region of its great potential.

Directly behind this diplomatic standoff is Prime Minister Junichiro Koizumi, or rather, his visits to Tokyo’s Yasukuni Shrine.

Another contributing factor is the fact that bilateral exchanges and channels of discussion between the two countries are far more feeble and less frequent than those Japan shares with the United States and European nations.

Indeed, Asian diplomacy is shaping up to be a focal point in the Liberal Democratic Party’s presidential election to be held this fall.

Already, various arguments concerning the Yasukuni issue are progressing. But even if the matter is settled, I doubt mutual understanding between Japan and China would show any substantial progress given the fact that bilateral exchanges between the two tend to be closed and limited to only a few groups.

In terms of public awareness, the gap between the two countries remains wider than ever.

Last August’s Beijing-Tokyo Forum was attended by about 200 government officials, politicians, business leaders and journalists from both countries. The contents of the discussion were broadcast and received wide media coverage not only in
Japan and China but around the world.

Most who participated are not experts on Japan-China relations in the traditional sense. They are intellectuals who have a major impact on policymaking and the formation of public opinions in their respective countries. Their backgrounds are varied and they all took part of their own accord.

The forum has two major objectives: One is to develop a new system to advance mutual understanding between Japan and China through discussion. The other is to facilitate discussion aimed at giving rise to constructive action toward the future of Asia. Both objectives are supported by Genron NPO’s will to develop a communication channel that covers the entire Asian region. In that sense, last year’s meeting made significant progress.

Behind the unstable state of relations is the absence of basic understanding and a structural gap in awareness. The problem is that nothing has been done to improve this situation.

In order to reflect public opinion in the forum’s discussions as much as possible, we have agreed to conduct joint public opinion polls in both Japan and China each year.

The results of the first survey released just before the forum showed that most Chinese saw Japan as “militaristic” while most Japanese identified China with “territorial expansionism.”

Instead of simply calling for “Japan-China friendship”.a concept that has been repeatedly stressed in the past. many participants voiced the idea of showing “mutual respect.”

Even people who do not share the same ideas can advance discussion by respecting each other and act together through dialogue.

Instead of protecting our own national interests alone, we should talk matters over frankly revealing our real intention so that we may build a new relationship of trust. Only close

friends can fight and make up with each other again without hard feelings. This agreement was the greatest achievement of the forum’s first meeting. For the next 10 years, the forum will be held alternately in Beijing and Tokyo.

On August 3-4, it will meet for the second time in Tokyo. We expect more than 30 prominent Chinese intellectuals, including officials who hold key government posts and leaders of media organizations, to visit Japan. They will engage in heated debate with their Japanese counterparts in five groups, each of which will focus on history, natural resources and the environment, media coverage, Asian economic exchange and Asia’s vision for the future.

I insisted on organizing the forum in August because that is when Japan observes the anniversaries of the atomic bombings and the end of World War II. I want the Japanese summer to be viewed as a season when Asia’s future as well as its past can be reflected.

This summer, the Japanese political scene will be in the midst of an election campaign leading up to the LDP presidential election in September. Regardless of the outcome, we are determined to put the results of our discussion into concrete action for the future of Asia.

The author was formerly editor-inchief of the monthly magazine “Ronso” published by Toyo Keizai Inc. In 2001, he became the head of Genron NPO, a nonprofit organization that makes policy proposals through symposiums and other forums. He was born in 1958.